The uncertainty around escalating trade tensions between the U.S. and China has caused some volatility in the stock market lately. The S&P 500 has only gained about 3.7% over the past 12 months and even some much-anticipated IPOs, including the ridesharing company Uber, have disappointed.

Despite the unimpressive results from the market overall, some technology companies are still performing well at the moment, including Amazon.com (NASDAQ:AMZN), Microsoft (NASDAQ:MSFT), and Zendesk (NYSE:ZEN). 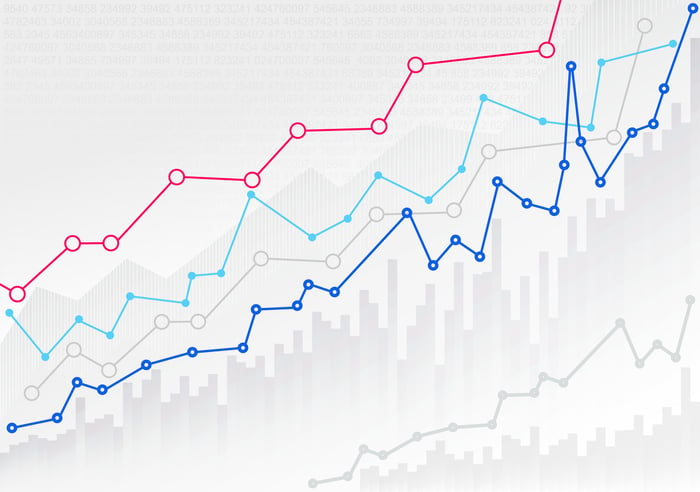 The e-commerce behemoth and cloud computing company has seen its share price slowly climb since the beginning of this year and is up about 21% as of May 24. While there haven't been any stand-out share-price pops over the past five months, Amazon has delivered some impressive quarterly results over this time frame.

The company reported earnings per share of $7.09 in the first quarter, which blew away analysts' consensus earnings estimate of $4.72. Operating income also popped to $4.4 billion, outpacing the high end of management's guidance of $3.3 billion for the quarter.

Surprisingly, investors didn't exactly respond enthusiastically to the company's first-quarter results. Amazon's stock price didn't budge much after the quarterly report was released, which likely indicated that some investors were concerned that Amazon's sales only grew by 17% year over year, which was the second sequential quarter of slowing revenue growth.

Despite all that, there's likely little to worry about for Amazon. Nearly half of all e-commerce sales in the U.S. this year will happen on the company's website, Amazon Web Services (AWS) is the leading cloud computing platform and the company's primary source of profit, and Amazon is quickly expanding its digital advertising business. All this means there's likely more room for Amazon's share price to continue to rise.

Microsoft's share price has steadily increased more than 24% since the beginning of the year, and there's no big surprise as to why. The company has reported two quarterly earnings so far this year, and both have been impressive.

In Microsoft's second-quarter results (reported Jan. 30), the company's sales jumped 12% year over year to $32.5 billion, just a smidge higher than analysts' consensus estimate of $32.49 billion. And adjusted earnings per share of $1.10 beat analysts' expectations of $1.09.

But it was the company's third-quarter results that really impressed investors and helped push the company's share price even higher. Microsoft reported sales of $30.6 billion, a 14% year-over-year increase from the year-ago quarter, which outpaced analysts' consensus estimates once again. On the earnings side, investors were pleased that the Microsoft's earnings per share of $1.14 jumped 20% and significantly outpaced expectations of $1 per share.

Much of the investor optimism surrounding the company comes from Microsoft's ability to grow its cloud computing businesses. The company's Azure cloud computing sales popped 76% in the second quarter and 73% in the third quarter. Azure growth has helped company to become the No. 2 public cloud computing company (behind Amazon) with 16.5% of the market.

As Microsoft continues to benefit from its expanding cloud computing services, its investors will likely reap the rewards as well. The global cloud computing market is expected to be worth $278 billion by 2021, which means that there's still plenty of room for Microsoft to grow.

Zendesk, a customer service platform company, has seen its share price skyrocket nearly 51% this year, with the first big jump coming in February when the company's sales grew by 41% year over year and non-GAAP earning per share of $0.10 easily surpassed analysts' consensus estimate of $0.03. As a result, investors pushed the company's stock price up 17% after the earnings release.

The company then reported another strong quarter at the end of May, with sales increasing 40% year over year, and non-GAAP earnings per share jumping 100% to $0.04. Part of the company's success comes from a growing list of cloud-based customer service solutions it offers its customers. In the most recent quarter, Zendesk CFO Elena Gomez said the company is seeing "exceptional performance from the Zendesk Suite."

In addition to its strong sales growth, the company is rapidly expanding its total customers as well. Zendesk now has 145,600 paid customers, an increase of more than 16% year over year.

Zendesk is still in full growth mode right now and continues to tap into the expanding market of cloud-based customer service tools. If the company keeps releasing new services that bring in additional customers, it's likely that investors haven't seen the last of this company's strong share-price performance.

Despite the strong performance by all of these companies since the beginning of the year, it's good for investors to remember to focus on a long-term timeline. If their share prices slide in the remainder of 2019, that doesn't mean theses stocks won't be worth holding on to. The share-price gains of Zendesk, Microsoft, and Amazon have been impressive this year, but holding on to them for the long term could reap even greater financial rewards.