Please ensure Javascript is enabled for purposes of website accessibility
Log In Help Join The Motley Fool
Free Article Join Over 1 Million Premium Members And Get More In-Depth Stock Guidance and Research
By Leo Sun – Updated May 31, 2019 at 10:54AM

The discount retailer’s comps are stabilizing, but its profits are sliding.

Dollar Tree (DLTR 1.41%) has underperformed its biggest rival, Dollar General (DG 0.59%), by a wide margin over the past few years. The reason is simple: Dollar Tree weighed itself down by acquiring its struggling rival Family Dollar in 2015. 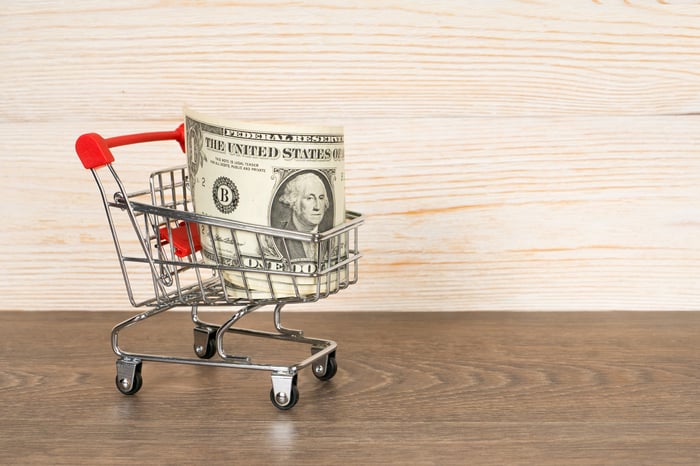 As a result, its total store count rose from 14,957 locations in the prior year quarter to 15,264 locations, making it one of the few U.S. retailers still expanding its brick-and-mortar presence. Here's how the two banners fared in terms of lifting comps over the past year:

Dollar Tree's first quarter comps were boosted by robust sales of consumables and seasonal products. Family Dollar's aforementioned turnaround efforts boosted its sales of consumables and offset the soft sales of its discretionary products, which still face stiff competition from Walmart and Amazon. Dollar Tree expects its total comps to rise by the "low single digits" for both the second quarter and full year.

Dollar Tree's gross margin was weighed down by higher payroll and freight costs, and a higher percentage of sales from lower-margin consumables. Family Dollar's gross margin contracted annually for similar reasons and was exacerbated by markdowns at shuttered and rebannered stores.

The looming threat of higher tariffs

However, Dollar Tree warned that its reduced guidance didn't include President Trump's recent threat to place 25% tariffs on List 4 products. Those tariffs, which could be levied on an additional $300 billion in Chinese goods, could impact 67% of consumer products according to Citi analysts.

During the company's earnings conference call, CEO Gary Philbin stated that Dollar Tree still sourced the "vast majority" of its products from China, and warned that List 4 tariffs would "be impactful" to its business and "consumers in general." However, he stated that the company wouldn't update its guidance until it had "more clarity" regarding the tariffs.

Dollar General made similar comments during its recent conference call, with CEO John Garratt warning that "shoppers will be facing higher prices as 2019 progresses."

Too many uncertainties ahead

Dollar Tree has been a retail survivor over the past few years. Its comps growth is stable, but it doesn't have much room to raise prices, and its margins and earnings could face intense pressure if the trade war escalates. Investors should avoid Dollar Tree until it offers a clearer battle plan to counter those headwinds.