Please ensure Javascript is enabled for purposes of website accessibility
Log In Help Join The Motley Fool
Free Article Join Over 1 Million Premium Members And Get More In-Depth Stock Guidance and Research
By Lee Samaha - May 31, 2019 at 8:16PM

Both companies are, for understandable reasons, being cautious with regard to assumptions over gas turbine demand. But what if they're being too pessimistic?

The power segment of General Electric (GE -0.65%) has been front and center among the company's problems over the last couple of years, and Siemens' (SIEGY 2.10%) gas turbine operation has faced significant issues, too. The key problem for both is the collapse in demand for large gas turbines and the consequent impact on equipment sales and service revenue.

However, there's one reason both companies have some potential upside in the coming years. Let's take a look at what that is.

To understand the overarching dynamic in the power industry, you have to look at the deterioration in large gas turbine orders over the past five years. As you can see below, the decline has been pretty dramatic, and GE's estimate of end-market demand in 2019 implies a halving from the demand levels in 2015. 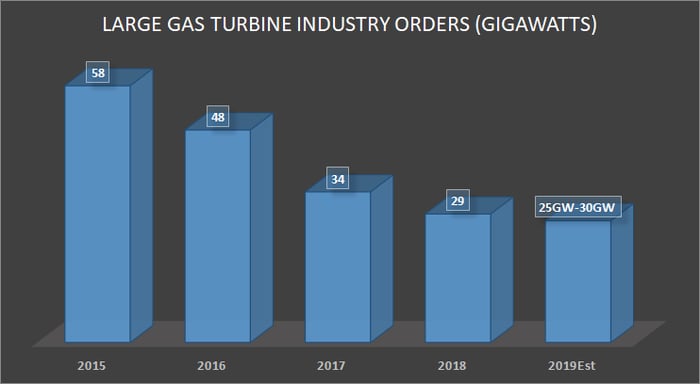 As a consequence, both companies are now undergoing substantive restructuring in order to reduce capacity and improve margin and cash flow in their power operations. After a 76% drop in its power and gas segment in 2018, Siemens plans for its restructuring to lead to a doubling in the segment's profit margin from 4% to 8% by 2021. In addition, Siemens has decided to spin off its gas and power segment and its majority stake (currently 59%) in wind-power company Siemens-Gamesa into the new company in order to offer a complete range of solutions to the power industry.

At GE, CEO Larry Culp has been quite candid on the subject of how his company was "slow to embrace market realities," and as such, it's been a bit late in joining the cost-cutting party. No matter. GE is now in full-on restructuring mode. The power segment margin of a negative 3% in 2018 is expected to turn into a positive result in 2019, and then the margin is expected to expand in 2020 -- free cash flow from power is still expected to be negative in 2019 and 2020.

What if end demand surprises to the upside?

Now we've come to the key point. Both companies are baking into their guidance a continuation of current market conditions, meaning any improvement in end demand could lead to a substantive pickup in margin and profitability at both companies' segments.

This argument runs contrary to the trends in end demand (see above chart), but here's the thing: It's incredibly hard to predict gas turbine equipment and services demand.

It's fashionable to criticize former CEO Jeff Immelt for his ill-fated purchase of Alstom's energy assets in 2015, a deal completed just as the market was about to begin its slump. However, before casting stones, it's worth remembering that Siemens and Mitsubishi also bid for Alstom's gas turbine and power assets. Given that the three companies dominate the gas turbine market -- and have a finger on the pulse of every significant power deal -- it's fair to say that the best-informed industry leaders failed to see the oncoming decline in end-market demand.

If they failed to accurately predict the downturn, why should they be any better at predicting future demand?

In a sense, the fact that Siemens is adding its stake in Siemens-Gamesa to the gas and power business is an implicit recognition of the need to hedge bets over future demand. In other words, the most pessimistic assumptions over gas turbine demand may turn out to be wrong. Indeed, global electricity generation from gas power generation continues to grow at a 2% compound annual growth rate -- suggesting turbine demand will eventually recover.

If you are tempted to take the view that the cautiousness in management's assumptions is leading to upside potential, then the least you can hope for is that GE and Siemens meet their earnings targets in the near to medium term. You might also hope for an improvement in end demand in the future.

In this context, Culp deserves plaudits for the way he has patiently rebuilt confidence in GE's earnings guidance -- no easy task after Immelt and former CEO John Flannery were both guilty of sticking to power guidance that left many in the market scratching their heads.

The gist of GE's plans for power involves a stabilization in the equipment and contractual services market, with management engineering a turnaround in its transactional services -- revenue and margin are expected to improve. The first quarter showed some progress in the power segment, but Culp acknowledged that the underlying improvements GE is seeing in its order book needed to be seen in the reported margins -- particularly with regard to transactional services.

All told, cautious investors may want to wait until GE can show a couple of quarters of definitive improvement in power before concluding that it's a good idea to buy GE stock. However, if GE can demonstrate that it's turning around its execution issues in power, then it's reasonable to consider the possibility that gas turbine demand surprises in a good way in the coming years.