Please ensure Javascript is enabled for purposes of website accessibility
Log In Help Join The Motley Fool
Free Article Join Over 1 Million Premium Members And Get More In-Depth Stock Guidance and Research
By Lee Samaha - Apr 21, 2019 at 9:03AM

GE's upcoming earnings report is likely to be highly eventful, but investors should focus on the long term.

General Electric's (GE 0.72%) upcoming results probably aren't going to be pretty, and the immediate headlines from the numbers aren't likely to be good. However, long-term investors shouldn't be obsessed with one quarter's numbers, so let's look at what they should be focusing on in the earnings report.

A difficult first quarter coming up

In a year when industrial free cash flow is forecast to be zero to a negative $2 billion, investors should expect a significant outflow in the first quarter. Indeed, CEO Larry Culp already prepared investors for the eventuality during the outlook meeting in mid-March. 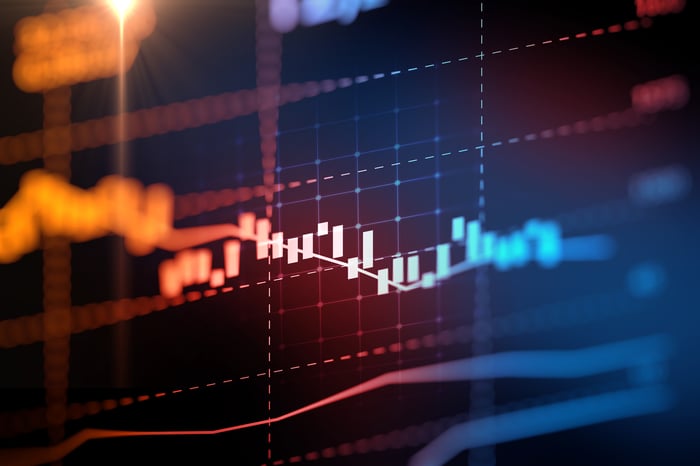 Moreover, the first quarter is usually one for a big cash outflow for GE. For example, adjusted industrial FCF was a negative $2.75 billion in 2017 and a negative $1.68 billion in 2018. This year is likely to be much worse.

That said, the key to the company's prospects is its long-term underlying cash flow generation, but unfortunately, GE faces significant challenges in the next couple of years that are obscuring the long-term picture. Power's FCF is set to only turn positive in 2021 due to a combination of significant restructuring actions and the company's battle to deal with a declining end market. Meanwhile, aviation FCF is challenged (forecast to be flat in 2019) due to the ramp-up in LEAP engine production.  Renewables FCF is forecast to be negative in the next couple of years as GE delivers wind turbines on which it has already received significant amounts of cash.

Key factors to focus on

That's the state of play right now, but what about the markers of long-term FCF progression?

In renewables, the key metric to follow is operating margin, because as you can see in a chart of margin and the average selling price for the order intake of GE's rival Vestas Wind Systems (VWSY.F 5.18%), there is significant pricing pressure in the industry. In fact, GE renewable operating margin declined to just 3% in 2018 from 6.3% in 2017, and management expects more contraction in 2019. 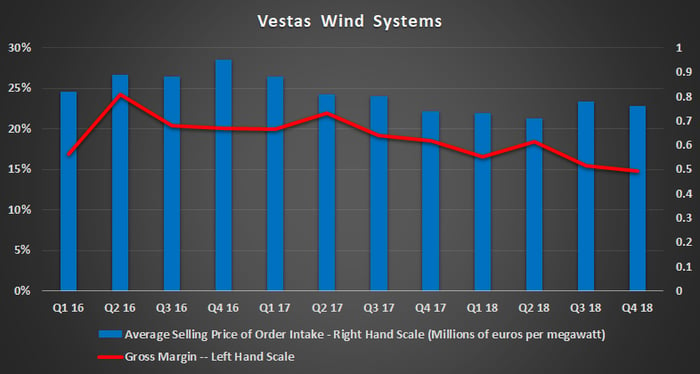 The key thing to focus on is not so much a metric as it is management's discussion of potential outcomes. The matter at hand is production of the LEAP engine, and specifically the LEAP-1B -- the sole engine option on the Boeing (BA 1.29%) 737 MAX. The LEAP-1A has a 58% share of the Airbus A320 NEO, according to GE CFO Jamie Miller. Pratt & Whitney's (United Technologies) geared turbofan is the other engine option on the Airbus A320 NEO.

Despite LEAP being a relatively small part of GE's revenue at present, it's the key to the aviation's segments service/aftermarket revenue. As such, the recent production cut on the Boeing 737 MAX is a concern. While GE is not responsible for what will happen with the 737 MAX, Culp will surely be asked about LEAP production plans should the 737 MAX production rate stay constrained for an extended period.

GE's power segment lies front and center among the company's problems, and management guidance is for power FCF to only turn positive in 2021. In fact, a recovery in power is an inescapable part of the bullish case for buying the stock.

The power segment is now split into two, with the GE Power portfolio comprising the steam, grid solutions, and nuclear businesses, while the more problematic GE Gas Power has all the gas product and service businesses.

GE Gas Power generated around half the total power revenue in 2018, and as you can see below, a recovery is predicated on revenue and margin growth in its transactional services revenue -- something Miller has described as "largely a self-help story."

It may well be a self-help story, but it's one GE's management aimed to improve on as long ago as November 2017.   In fact, it was an integral part of the plan to increase power margin in 2018.

However, as Miller noted during a recent investment conference, GE has seen "growth in orders and a significant growth in margin on those orders." But "we have not seen growth in our contribution margin yet," and "operationally, we're finding that we're not yet there on on-time delivery and execution." f

Look for analysts to zero in on this aspect of power's performance, because if Culp can demonstrate some tangible improvement, the market is likely to reward the stock.

Looking ahead to the first quarter and beyond

Given Vestas' performance, it's hard to expect much from GE's renewable margin, and the LEAP-1A issue is a significant worry. However, GE can start to demonstrate progress on improving revenue and margin from GE Gas Power's transactional services. That would help reassure investors that the company is on the right road to recovery.