Please ensure Javascript is enabled for purposes of website accessibility
Log In Help Join The Motley Fool
Free Article Join Over 1 Million Premium Members And Get More In-Depth Stock Guidance and Research
By Lou Whiteman - Updated Jun 4, 2019 at 11:30AM

Shares of Weyerhaeuser (WY -0.61%) dropped like a log in May, trading down 14.9% for the month, according to data provided by S&P Global Market Intelligence. Given the company's standing as one of the top private owners of timberland, Weyerhaeuser tends to rise and fall with lumber costs, and the trends of late have been working against Weyerhaeuser.

Weyerhaeuser, a real estate investment trust focused on timber, rallied in early 2019 on investor optimism that the economy was holding up, which would mean continued strong demand for housing and other products that rely on lumber. Indeed, earnings have held up pretty well so far this year, with the company in late April reporting first-quarter earnings of $0.11 per share, beating the $0.09 consensus. 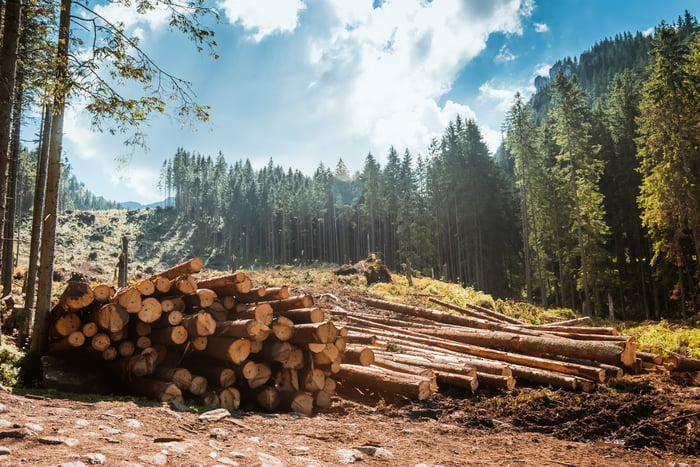 Shares of Weyerhaeuser have been chopped down in May. Image source: Getty Images.

But beneath the surface there are worrying signs. The commodity price of lumber, which hit a high of more than $600 per 1,000 board feet barely a year ago, has been plunging in recent months to a recent $301.80.

Part of the issue is global demand, and in particular China. CEO Devin W. Stockfish during Weyerhaeuser's April 26 first-quarter conference call admitted tariffs could be an issue, but said, "We are optimistic that it will get resolved at some point, and I think importantly we're really well positioned if and when those tariffs do come off to reaccelerate the growth out."

Obviously, the tariff issue has only intensified in the weeks since April 26, and with it, pressure on Weyerhaeuser shares.

Stockfish in April was reasonably optimistic about how 2019 was shaping up, saying, "[W]e anticipate modest year over year housing growth and expect that building activity will accelerate with improved weather and continued macroeconomic stability."

Lumber is an important commodity, and Weyerhaeuser remains one of the best bets for investors seeking exposure to the commodity. But until the trade issues with China lifts, and with them, hopefully, uncertainty about the current economic environment, it is going to be difficult for Weyerhaeuser shares to take off.

Why Shares of Weyerhaeuser Were Up in April

Weyerhaeuser: Merger Synergies to Tide Investors Over Until Market Recovery