Lumber prices had been on an upward climb since the Great Recession about a decade ago. They were particularly hot through much of 2017 and early 2018, which was a boon for lumber producers like timber REITs Weyerhaeuser (NYSE:WY), Rayonier (NYSE:RYN), and PotlatchDeltic (NASDAQ:PCH). The stocks of all three enjoyed big run-ups of more than 20% over that time frame.

Lumber prices, however, have cooled off in recent months due to concerns that the housing market is slowing down, which has taken the stock prices of these large lumber producers down more than 20% from their highs. While that sell-off burned investors in 2018, it makes these stocks more compelling to consider for 2019 and beyond, especially by income-seeking investors, since each offers an attractive dividend yield. 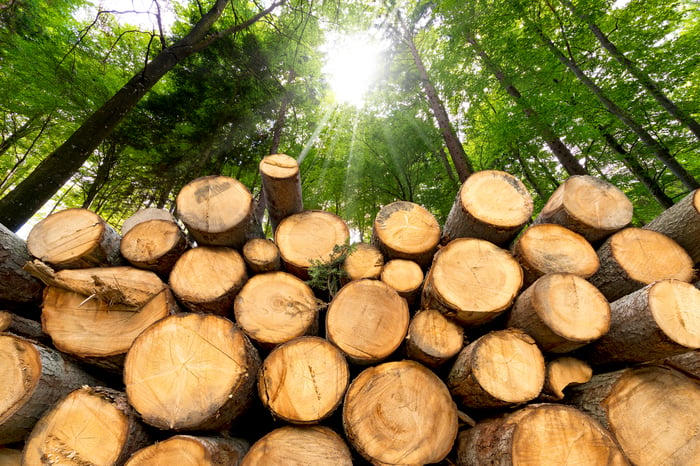 The king of the forest

Weyerhaeuser is the largest private owner of timberlands in North America, at 12.4 million acres. It also operates some of the lowest-cost wood products manufacturing facilities in the industry. These businesses enable the company to maximize the value of the lumber its lands produce, which gives it the cash to pay a lucrative dividend that now yields 5.5% after the stock tumbled nearly 36% from its recent high.

While lumber prices have fallen considerably over the past few months, many timber industry experts see prices stabilizing at their current level and then moving higher in the coming years. That's because demand for lumber is growing faster than the industry can keep up with due to wildfires, insect infestations, and other issues. That should enable Weyerhaeuser to continue generating solid earnings from its timber business going forward, which would give it the funds to keep increasing its dividend, as well as buying back its stock.

Timber companies Potlatch and Deltic Timber merged earlier this year to create one stronger entity called PotlatchDeltic, which is a diversified lumber company that owns nearly 2 million acres of timberlands, as well as several wood products manufacturing facilities. The company expects the combination to save it more than $50 million in costs per year as it leverages its greater scale.

While the deal initially drove shares higher, they've fallen back down to earth along with lumber prices and are currently roughly 37% below their recent high. That's because the company has the greatest direct exposure to lumber prices among the timber REITs since it gets a larger portion of its earnings from lumber-based pricing than its peers. However, that also means it has more upside to a recovery in lumber prices in the future. In the meantime, the company's dividend yields an attractive 4.5%, and PotlatchDeltic expects it to continue growing in the coming years.

Rayonier's stock hasn't been hit as hard as its peers, only falling about 23% from its peak this summer. That's because it has less direct exposure to lumber prices since it doesn't own any wood products manufacturing facilities. Instead, it sells its timber to third parties. While that means it has less upside based on lumber prices, its earnings aren't as volatile since timber margins don't fluctuate as much as those of wood products.

Because of that, Rayonier offers investors a lower risk way to invest in the lumber market, though with less reward potential should lumber prices rebound. Meanwhile, it has a lower dividend yield than PotlatchDeltic and Weyerhaeuser at 3.5%, though it expects to continue increasing it in the future.

These lumber stocks are great options for 2019

As lumber stocks sold off in the latter half of 2018, it caused the stock prices of timberland owners to tumble. However, that gives investors two compelling reasons to consider buying lumber stocks.

First, the dividend yields of these timber REITs rose as their stock prices fell, making them more attractive to income-seeking investors. In addition to that, the drop in their stock values makes them intriguing bounce-back candidates if lumber prices head higher in the coming year. That's why investors might want to consider buying one of these lumber stocks for 2019.