GameStop is grappling with how it will adapt to a cloud gaming future.

GameStop (GME -1.98%) is struggling to stabilize its business amid a sea change in the way video games are purchased. Consumers can now download games directly from their gaming consoles, and as technology progresses, streaming video games without a download may be coming faster than people think.

Microsoft (MSFT -2.36%) has been on the cutting edge of cloud gaming and streaming for some time now. Recently, Microsoft announced several initiatives aimed at accelerating the move to disc-less gaming. The company's latest announcement to partner with Sony to help power PlayStation's streaming efforts represents another major blow to GameStop's long-term viability as a business.

The state of play at GameStop

As a video game retailer, GameStop has been fighting against several negative trends affecting its business. First, consumers are increasingly buying from major online retailers like Amazon instead of from brick and mortar retailers. Second, video game software is increasingly being sold as downloadable content directly to a computer or video game console, cutting out middlemen like GameStop.

As a result of these trends, GameStop has seen its sales and profits decline precipitously. The company continued to show weakness when it reported its financial results for 2018. Its total revenue for 2018 declined by 3.1% to $8.3 billion, and its net income from continuing operations fell by 22.9%. These recent data points are simply a continuation of the long-term trend of decline at the company. 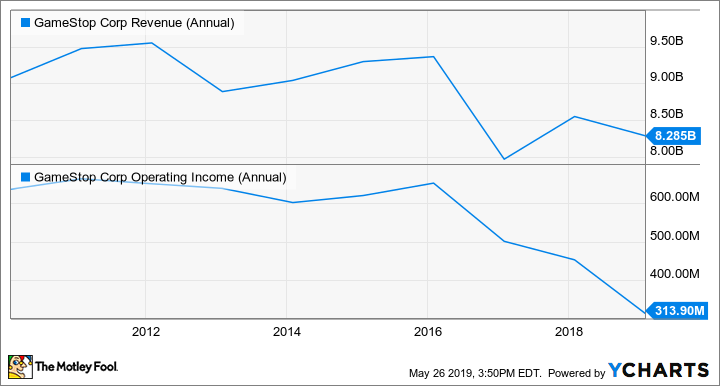 On its fourth-quarter 2018 earnings call, GameStop attributed its sales decline primarily to "a decrease in pre-owned video game sales" and "new software sales." GameStop will see lower sales of both new and used games as more people download games rather than purchasing them in stores. The company has built an extremely profitable business of buying and reselling used game discs, but this business model is becoming obsolete.

Microsoft is accelerating the move to cloud gaming

Microsoft has come a long way since it launched its first Xbox in 2001. The company pioneered online gaming with its Xbox Live service, and with the Xbox 360, Microsoft allowed users to directly download several video game titles.

Now, Microsoft is pushing the cloud gaming envelope even further. In May, the company launched a disc-free version of the Xbox in Europe called the Xbox One S. The disc-free Xbox comes with a few games pre-installed and a 1 terabyte hard drive that can be used to download games purchased online.

The Xbox One S is just a one step in Microsoft's cloud gaming strategy. The company has also been developing its highly anticipated xCloud game streaming service. Although the project still has a way to go before it can be commercially released, it enables game streaming on any device -- including mobile phones and PCs with internet browsers -- with just the assistance of a gaming controller. This would eliminate many of the barriers associated with high-end gaming, including the need to purchase gaming consoles. 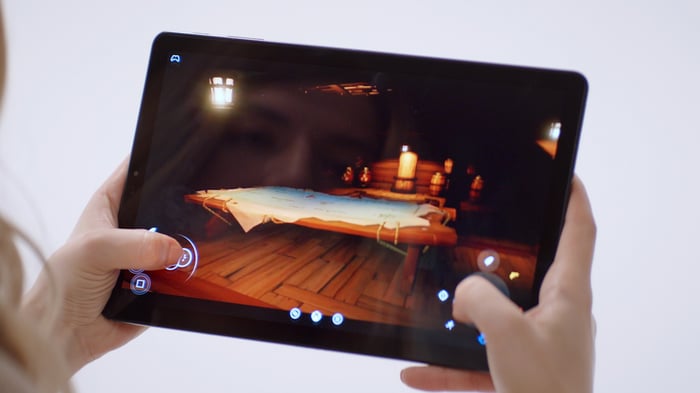 A demonstration of the xCloud gaming service on a tablet. Image Source: Microsoft.

Microsoft and Sony aren't the only companies bringing gaming to the cloud. Alphabet's Google has revealed its Stadia cloud streaming service, and several other companies are rumored to be working on streaming projects. These developments do not bode well for GameStop and should leave investors questioning whether GameStop will have a role in the video game market of the future.

GameStop will need to adapt to the changing video game industry if it doesn't want to end up like Blockbuster. To its credit, the company has experimented with several tweaks to its business model to see if anything will gain traction.

One attempt to reinvent itself was to get into the mobile phone business. Through a series of acquisitions, GameStop became the largest operator of AT&T wireless stores. However, the strategy did not generate strong financial returns after AT&T changed its compensation structure for resellers. This year, GameStop retreated from its mobile phone strategy and sold its wireless store business for $700 million.

Another tactic has been to start selling collectible items related to video game characters. GameStop now operates over 100 stores dedicated to selling collectibles and has had some moderate success in this area, with 2018 revenue from collectibles rising by 8.5% to $707.5 million. The problem is that with GameStop having $8 billion in total company revenue, the collectibles business is too small to move the needle for now.

More recently, GameStop announced its intentions to get into the esports business. GameStop plans to sponsor live video game competitions and host events at its stores in the hope that it can sell merchandise and drive store traffic. In addition to competitions, the company will host clinics where aspiring gamers can train with coaches to improve their skill. The vision is to foster a new community around esports that can extend the company's brand beyond simply selling video game titles. This is certainly an interesting strategy, but it remains to be seen if GameStop will be able to gain traction in this new market.

For now, GameStop still has a sizable -- although declining -- business selling new and used video game hardware and software. The advent of streaming will accelerate the decline in its legacy business. GameStop will need to find new sources of revenue to offset its lost earnings.

GameStop has been put in a near impossible situation whereby technological change is disrupting its once-lucrative business. Microsoft is leading the charge toward cloud gaming and streaming, and is even positioning itself to use its cloud computing capabilities to power the streaming ambitions of other gaming platforms.

Unfortunately for GameStop, history hasn't been kind to the disrupted. If GameStop wants to avoid being the next Blockbuster, it will need to quickly adapt and find new sources of revenue. To its credit, the company has made interesting moves to experiment with new types of merchandise such as mobile phones and collectible items. Also, the ambition to be a player in esports is a creative use of GameStop's retail footprint. It will be interesting to see if any of these initiatives pan out.