Please ensure Javascript is enabled for purposes of website accessibility
Log In Help Join The Motley Fool
Free Article Join Over 1 Million Premium Members And Get More In-Depth Stock Guidance and Research
By Nicholas Rossolillo - Jun 5, 2019 at 9:05AM

The enabler of e-commerce is pivoting toward an opportunity that could power its next wave of growth.

Where Amazon (AMZN 0.25%) has disrupted the world of retail with its direct online selling prowess, Shopify (SHOP -7.02%) has made its name behind the scenes, helping other companies set up their own digital sales capabilities. For any business -- from a multibillion-dollar enterprise to a small startup that hasn't made its first sale yet -- it has an e-commerce solution, and its results over the last few years have been impressive.

Yet the business-to-consumer (B2C) model is maturing; acquiring the ability to sell on the internet is now mandatory for any retailer that wants to thrive. The movement is still yielding huge returns for Shopify, as the first quarter of 2019 demonstrated with a 50% year-over-year surge in revenue. However, another similar transformation is still in the early innings of development: business-to-business (B2B) services. B2B isn't what Shopify is known for now -- but that could change.

As far as acquisitions are concerned, Shopify is a lot less active than some of its techie peers are. Deals are few and far between, and tend to be small. In 2018, for example the company acquired two start-ups for undisclosed but likely small sums: Return Magic (an online order return software outfit) and Tictail (an e-commerce building service for emerging brands).

More recently, Shopify acquired a different kind of start-up: Handshake, a small platform for B2B e-commerce. Handshake offers two services, one to enable business purchasers to place orders online, and another for sales reps to manage orders and access inventory. What Shopify paid for Handshake wasn't disclosed either, which means it was likely a relatively small deal as well -- although PitchBook has the acquisition cost listed at $100 million.

B2B is significantly different than selling to consumers, and it's an arena in which Amazon has already made headway. For Shopify and its B2C platform, this is a new territory -- but a territory that it's high-time for it to enter. 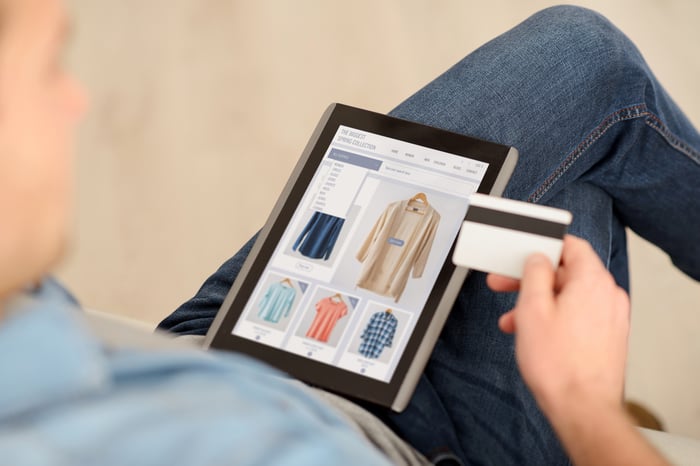 Why the pivot needs to happen

The global B2B selling economy is worth trillions of dollars annually, and just like in consumer retail, digital disruption has upended it. U.S. B2B e-commerce surpassed $1 trillion in 2018, but there are plenty of goods and service suppliers out there still scrambling to update their selling models.

I wrote a few months ago about how Amazon and Alphabet's (NASDAQ: GOOGL)(NASDAQ: GOOG) Google have taken early leads in B2B e-commerce, but other companies like Salesforce (NYSE: CRM) and Adobe (NASDAQ: ADBE) are trying to put the power back in the hands of businesses. That cut-out-the-middle-man model has worked well for Shopify on the consumer side of the equation, so why not on the business side as well? Handshake, which has apparently been integrated into Shopify Plus, could help lay the groundwork for a push in that direction.

This could also provide the next big wave of expansion Shopify needs if it's going to justify its lofty valuation. While the 50% year-over-year revenue growth it posted in Q1 was nothing to complain about, its top-line gains are decelerating. Sales were up 59% in 2018, and up 73% in 2017.

Of course, Shopify's recent cool-off is a modest one, and its current momentum in digital retail is still strong. However, many more years of torrid top-line expansion are priced into the stock -- it's currently trading at 25 times trailing 12-months sales, and operating at a slight loss. But the company is reinvesting into itself to keep up the brisk pace. Handshake could help Shopify make more headway into the world of digital commerce, and be the spark for the stock's next run higher.