Oil prices have plummeted in the past couple of weeks, significantly improving the earnings outlook for Spirit Airlines.

A renewed spike in global trade tensions and evidence that economic growth is slowing have combined to send the stock market tumbling over the past month or so. Airline stocks including Spirit Airlines (SAVE -1.98%) have been caught in the downdraft. 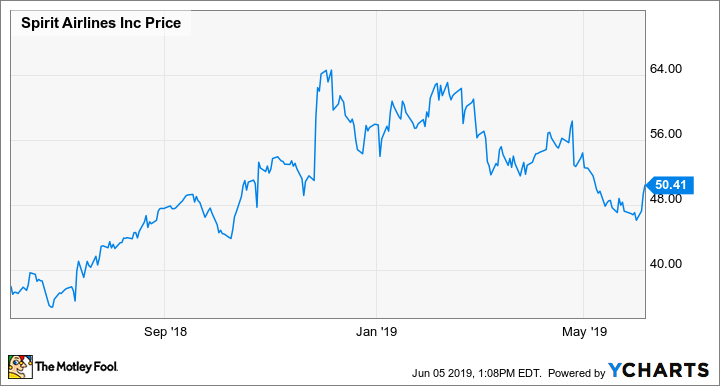 For each of its past two quarters, Spirit Airlines has posted strong unit revenue growth, enabling it to nearly double its earnings per share on a year-over-year basis. Spirit's outlook for the current quarter isn't too shabby, either. Analysts expect adjusted EPS to soar 48% to $1.64 this quarter. That would put the company's EPS growth for the first half of the year at 60%.

Spirit Airlines will face tougher comparisons, though. In the first half of 2018, the carrier's revenue per available seat mile (RASM) declined 4.6% year over year. By contrast, RASM returned to strong growth in the back half of the year, starting with a 5.5% increase in the third quarter.

As a result, the analyst consensus currently calls for EPS growth to slow to 22% next quarter: barely more than Spirit's projected revenue growth of 15%. Analysts expect negligible earnings growth in the fourth quarter, when year-over-year comparisons will be the toughest.

Perhaps because of this projected slowdown in earnings growth, Spirit Airlines stock currently trades for a bargain valuation of less than nine times forward earnings. Yet the recent plunge in oil prices means that EPS growth may not slow as much as investors seem to fear. Fuel prices are coming down again

The price of Brent crude plummeted from a recent high of around $86 per barrel last October to a low just above $50 per barrel at the end of 2018. However, Brent crude prices rebounded in the first few months of 2019, reaching $70 a barrel in early April and remaining in a $70 to $75 a barrel trading range for most of the following month and a half. Those gains just started to reverse in late May. By this Monday, Brent crude had retreated to around $63 a barrel.

This drop has caused jet fuel prices to moderate. The benchmark price of jet fuel fell to $1.76 per gallon on Monday, a level not seen since early January. It has continued to move lower in the past few days. For comparison, in the second half of April -- when most airlines were revealing their Q2 forecasts -- jet fuel was priced at around $2 a gallon.

The pullback in oil prices has come too late to have much of an impact on Spirit Airlines' second-quarter results. However, if prices remain low, that could dramatically boost the carrier's earnings growth in the second half of the year.

Spirit paid an average of $2.36 a gallon for jet fuel in the third quarter of 2018 and $2.26 in the fourth quarter, including taxes and transportation costs. At current market prices, Spirit's all-in jet fuel cost would probably be a little less than $2 a gallon. Considering Spirit Airlines uses more than 120 million gallons of jet fuel each quarter, the potential savings in the second half of 2019 could be $80 million or more.

Investors are right to expect RASM growth to decelerate at Spirit Airlines in the second half of 2019 because of tough year-over-year comparisons. But solid domestic economic conditions should keep leisure travel demand relatively strong, while the Boeing 737 MAX groundings should limit industry capacity growth, at least in the third quarter. As a result, Spirit's unit revenue is likely to continue rising in the second half of this year -- just at a slower rate. That should be sufficient to offset Spirit's modest nonfuel unit cost growth.

Over the past year, Spirit Airlines has demonstrated that it has adapted its business model so that it can grow unit revenue when necessary to offset rising fuel costs. Nevertheless, a low-fuel-cost environment would be even more conducive to Spirit continuing its recent run of stellar earnings growth.