2019 has gotten off to a shaky start for many U.S. airlines. Stock market volatility, the threat of a trade war, and disruptions related to the grounding of the Boeing 737 MAX have all weighed on unit revenue growth.

However, none of these issues have had much of an impact on Spirit Airlines (NYSE:SAVE), thanks to the carrier's all-Airbus fleet and its focus on serving price-sensitive leisure travelers. Nevertheless, Spirit Airlines shares have fallen about 13% since the beginning of 2019. 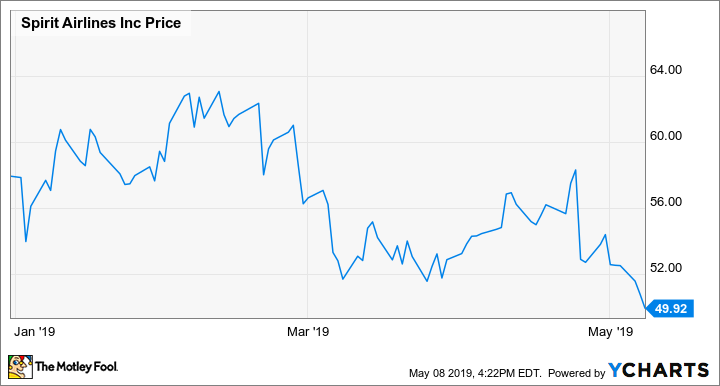 This has made Spirit Airlines stock a great bargain for investors. As the company carries out its growth strategy over the next few years, the stock could easily double (or more).

In conjunction with the earnings report, Spirit Airlines warned that it would incur additional costs beginning in the second quarter as it increases staffing to cope with runway construction in Fort Lauderdale (its biggest base of operations). It also said that severe storms in Florida around Easter weekend had triggered an unusual number of flight cancellations, leading to lost revenue and higher unit costs.

Despite these headwinds, Spirit Airlines expects RASM to rise about 5% this quarter, outpacing its projected 4.6% increase in nonfuel unit costs. With fuel prices still slightly lower than a year ago, Spirit remains on track for strong double-digit EPS growth.

The Wall Street analyst consensus currently calls for Spirit Airlines' adjusted EPS to jump 29% to $5.67 this year, followed by a 12% increase to $6.37 in 2020. Indeed, EPS could continue rising at a double-digit compound annual growth rate for many years to come. First, Spirit Airlines could continue growing capacity at a double-digit annual rate for at least five more years, based on the company's market analysis. That would allow it to sustain double-digit EPS growth even with no margin expansion.

Second, Spirit has meaningful opportunities to improve its unit revenue over the next few years. The airline is working to overhaul its loyalty program and credit card program to drive high-margin revenue growth. Additionally, as Spirit Airlines has gained scale, its ability to serve connecting traffic in markets with less price competition has improved.

Third, Spirit Airlines' fleet could be a source of substantial cost savings over the next few years. The carrier has 30 leased A320s that entered its fleet between 2010 and 2014. Spirit likely pays over $100 million annually under these leases, which expire beginning in 2022. At some point in the next few years, the airline will likely buy most of these aircraft, as it did a year ago for 14 previously leased A319s. Doing so would save tens of millions of dollars annually.

The stock is a ridiculous bargain

Considering that Spirit Airlines is well positioned to deliver double-digit annual EPS growth deep into the 2020s, one might expect the stock to carry a premium valuation -- at least by airline standards. Instead, Spirit Airlines stock currently trades for around $50, less than nine times what analysts expect the company to earn this year.

Back in late 2016, I wrote that Spirit Airlines stock could potentially reach $100 by 2020, based on EPS of at least $6 (and as high as $8). While the consensus estimates have fallen quite a bit over the past month, analysts still expect Spirit to earn more than $6 per share next year. Yet Spirit Airlines shares have actually fallen a bit since the end of 2016.

If investors become more comfortable with Spirit Airlines' earnings growth trajectory, shares of the budget airline still have a legitimate shot at reaching $100 before the end of 2020. Indeed, if Spirit Airlines stock traded at the average forward P/E ratio of the broader stock market, it would already be worth more than $100.

The good news for long-term investors is that if Spirit Airlines keeps growing EPS at a double-digit rate, the share price is almost certain to reach triple-digit territory sooner or later. That makes it a great stock to buy this month.