Shares of NIO (NYSE:NIO) fell 37.1% in May, according to data from S&P Global Market Intelligence. The Chinese maker of electric vehicles saw its stock lose ground following increasing U.S-China trade tensions and first-quarter results that fell short of expectations, along with guidance suggesting a continued slowdown for the company's vehicle shipments. 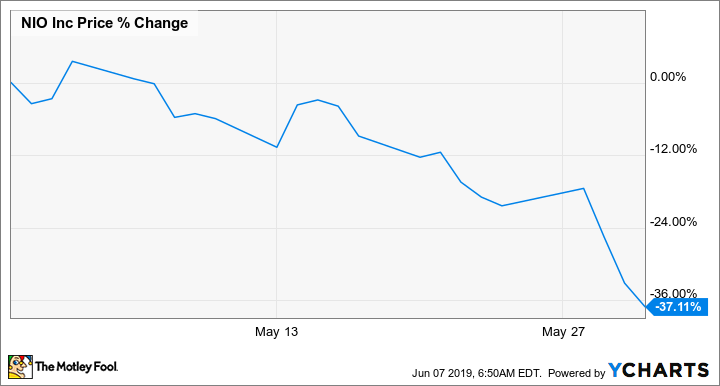 NIO reported earnings on May 28, with sales for the period falling 54.6% on a local-currency basis to land at roughly $228.8 million. Total revenue for the period came in at $243.1 million, and the company posted a net loss of roughly $390 million. The company delivered 3,989 ES8 vehicles in the quarter, ahead of its target, but down substantially from the 7,980 vehicles delivered in Q4. In conjunction with its first-quarter earnings release, the company announced that it had delayed the launch of its recently unveiled electric sedan in order to build it on a new technology platform. NIO also announced that it would put its plans to enter the U.S. market in 2020 on hold.

NIO had its initial public offering in September, pricing its American depositary shares at $6.26. Shares spiked not long after the debut, climbing as high as $13.80 thanks to excitement surrounding the growth prospects for electric cars in the Chinese market.

However, an escalation of trade tensions depressed shares and caused the stock to end the year virtually in line with its IPO price. Shareholders then got additional bad news in March when the country's government announced that it would reduce subsidies for electric vehicles. This development prompted steep sell-offs for the stock, and with trade issues persisting and the slowdown for ES8 deliveries, there hasn't been much good news to help its share price recover in the subsequent months.

Sell-offs for NIO have continued in June, with shares trading down roughly 8% in the month so far. 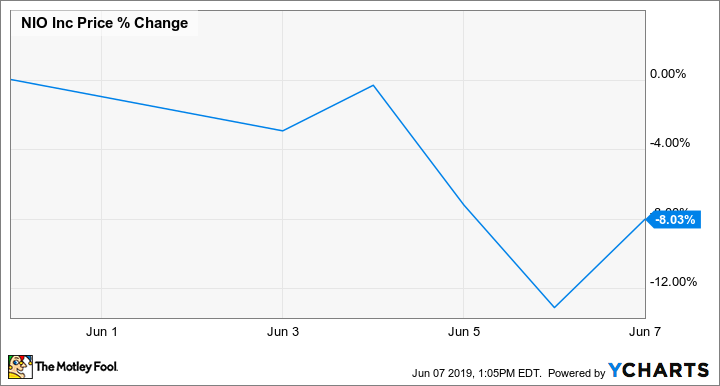 The company posted vehicle sales numbers for May on June 4, announcing that it had delivered 1,089 of its ES8 vehicles in the month and 2,213 ES8s across the first two months of the current quarter. Barring a substantial sales uptick in June, this puts the company's second-quarter vehicle deliveries on track to come in significantly below its vehicle shipments in Q1.

NIO is valued at roughly $2.85 billion, and shares trade at roughly 1.5 times this year's expected sales. That might look pretty cheap. However, automotive manufacturing is highly capital intensive, vehicle sales are heading in the wrong direction, and NIO is a young business in its early growth stages, so the company will likely continue to post big losses in the near term.