Please ensure Javascript is enabled for purposes of website accessibility
Free Article Join Over 1 Million Premium Members And Get More In-Depth Stock Guidance and Research
By Billy Duberstein - Jun 8, 2019 at 8:15AM

Both tech giants are under the scrutiny of U.S. government regulators. Which is in more danger?

It has been a rough go for the leading U.S. large-cap tech companies lately, and now the U.S. government may be turning its eye toward these tech giants with an antitrust lens. Two companies caught in the crosshairs are perennial investor favorites Apple ( AAPL 3.16% ) and Alphabet ( GOOG -2.51% ) ( GOOGL -2.50% ). But is it time to panic, or take advantage?

Earlier this week, the Justice Department and the Federal Trade Commission decided to stake out their respective turf for investigations into Apple, Alphabet, Facebook ( FB -4.01% ), and Amazon ( AMZN -1.53% ), with the DOJ taking on Apple and Alphabet, and the FTC leading the investigations into Facebook and Amazon. While both Apple and Alphabet have recovered from their December lows, they're still down substantially since U.S.-China trade tensions heated back up in early May. The investigation announcements this week didn't help.

And yet, both Apple and Alphabet have terrific, dominant businesses, and are now trading at much more favorable valuations for potential buyers. Which is the better bargain? Who's in more danger? The answer may depend on the results of the Justice Department investigations. 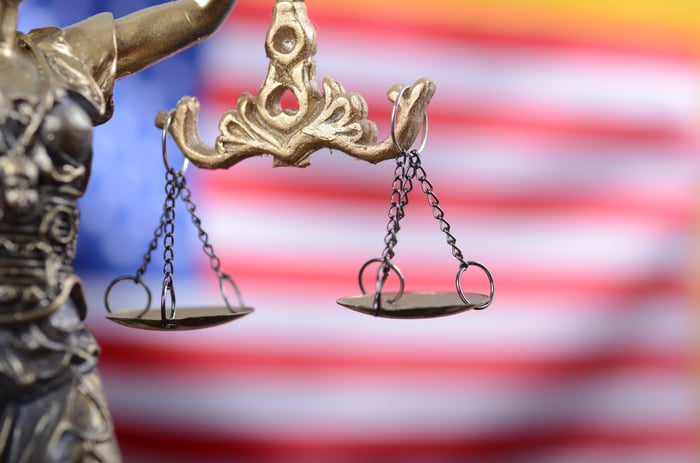 Apple and Google and both under the eye of antitrust regulators. Image source: Getty Images.

The case against Alphabet

According to The Wall Street Journal, the Justice Department and FTC are scrutinizing Alphabet and Facebook more closely than Amazon and Apple. That makes sense, since Alphabet has a dominant 90%-plus market share in the global search market, and Facebook dominates social media advertising, with its ownership of both Facebook and Instagram.

Still, the case against Alphabet isn't straightforward, and may ultimately be difficult to enforce. After all, Google Search is a "free" service that is incredibly useful and helpful for customers. In addition, the very dominance of Google allows the product to be better, with Google's vast data collection allowing it to continually refine and improve its search algorithms to improve the service. It's difficult to see how consumers would be better off if they had a choice of several, albeit lower-quality, search platforms.

On the advertiser side, it may be possible that Google would extract high advertising rates from businesses. But if Google were to charge too high a price, it simply wouldn't be worth it for businesses to advertise on Google. They could just go to alternate platforms like Facebook, other internet sites, or traditional TV and media. In fact, Alphabet has been consistently lowering the price for online search ads -- last quarter, the company's cost per click declined 19% year over year -- not exactly what one would expect from a company that's abusing monopoly power.

Nevertheless, new regulations could make it more difficult for Alphabet to generate new services and promote them via Google Search. For instance, in 2017 the EU fined Alphabet $2.7 billion for favoring its own online shopping services on Google Search to the detriment of would-be competitors. Alphabet has in the past tried to incubate new services in local deals, restaurant/business reviews (in competition with Yelp), and online travel. It appears as though any possible fines or regulations would focus on these areas, which wouldn't necessarily threaten Alphabet's core business, but may make it difficult for Alphabet to develop new services that compete with smaller online players.

The case against Apple

Apple is definitely not a monopoly. In Q4 2018, Apple only had about a 17% global smartphone market share, according to Counterpoint Research. The issue with Apple appears to be its App Store, for which Apple takes a 30% cut of revenue from developers.

While 30% does seem like a high price to pay, it's hard to say that Apple doesn't deserve to extract some sort of fee for use of the platform. Spending on Apple's app store is much higher than that of Android (owned by Alphabet, which also charges a 30% fee), despite Apple's lower phone market share. In addition, Apple's developer tools are known to be best in class, and writing apps for Apple phones is simpler than that for Android, which is used by many different phone makers throughout the world and has many different (older) versions of the operating system in use. That's in contrast to Apple, for which most users are all on the latest and greatest version of iOS.

Apple's developer friendliness was on full display at its recent WWDC conference, where it introduced SwiftUI, a new coding framework that takes a lot of the tedious and "boilerplate" coding out of the app development process.

Nevertheless, some developers aren't happy about the 30% fee. Large companies offering popular services via the App Store -- like Netflix, Spotify, and Fortnite producer Epic Games -- have all directed customers to purchase their services directly, rather than through the app store and only use the app to access the service. This has led to some decline in revenue for Apple, but most smaller developers don't have the heft of these companies and still sell through the App Store.

Even if changes do need to be made to Apple's App Store practices, the App Store is only one part of Apple's Services segment, which also includes Apple Music, Apple Pay, and AppleCare. Services in total made up only about 15.7% of Apple's sales over the past six months -- although services are definitely getting more important for the iPhone giant's future growth.

Which is more at risk?

I'm personally a fan of both companies and think the recent sell-offs will, in the future, prove to be good buying opportunities. If I had to pick one stock to buy over the other, it would probably be Apple. While Apple also has significant issues stemming from the U.S.-China trade spat, I still think Apple is less at risk than Alphabet in terms of antitrust legislation and potential multibillion-dollar fines.

Also tipping the scales are Apple's lower valuation, slightly higher net cash hoard, the relatively small portion of revenue coming from its App Store, and its focus on personal privacy. Privacy is a legitimate issue for the targeted-ad-based Alphabet, and it will continue to draw scrutiny from regulators.