Larry Culp gave a very interesting presentation at the recent Bernstein Strategic Decisions conference. Although, there were some negative conclusions to be drawn about the near term for General Electric (NYSE:GE), his presentation suggested that management had, at the very least, steadied the ship regarding its debt management and strategic direction, and there was some food for thought regarding GE's ability to improve earnings in the coming years.

Let's take a closer look at the key conclusions from the presentation.

There are two things to focus on, here. First, Culp reiterated that GE's industrial free cash flow (FCF) would be negative "to the tune of $1 billion to $2 billion" in the second quarter. As a reminder, GE expects full-year industrial FCF to be negative $2 billion to zero, and the first quarter saw a better-than-expected negative $1.2 billion. 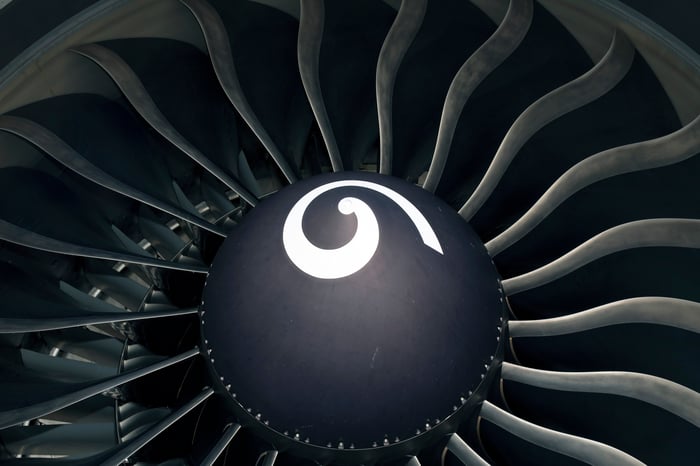 Indeed, Culp's commentary on the impact of the 737 MAX grounding and subsequent production cut -- GE's joint venture with Safran, CFM International, makes the sole engine option (LEAP) on the aircraft -- was a bit worse than what was discussed on the first-quarter earnings call at the end of April. Back then, Culp talked of something in the range of "200 million euros exposure in the second quarter," but at the Bernstein conference, it became a "$200 million to $300 million of cash headwind" in the second quarter -- for reference 200 million euros is equivalent to around $220 million right now.

One of the big fears with GE is that Culp would have to sell off the family jewels cheaply in order to reduce debt, particularly as FCF generation was turning negative. However, the deal to sell GE's biopharma business to Danaher for around $21 billion as well as "the nearly $15 billion that we could raise from the Baker [Hughes] and the Wabtec stakes" will go a long way toward reduce the current $55 billion in industrial net debt, according to Culp.

As to the family jewels, there's been speculation that the highly profitable GECAS jet engine leasing business would be sold, but Culp reiterated, "I think what we've said is that GECAS is not for sale."

Previously, GE planned to spin off its healthcare business partly to generate "proceeds to help de-lever the overall balance sheet," according to Culp. However, he outlined that the biopharma business sale to Danaher "was a way to shortcut" improving the balance sheet, and Culp lauded the remaining healthcare business as a "low- to mid-single-digit grower over time" with a good cash-conversion profile.

Clearly, the narrative around GE's portfolio restructuring has changed from fears over possibly fire-selling valued assets to management acting from a position of strength because Culp did the biopharma deal with his former company, Danaher. GE now has more flexibility with assets like GECAS and the remaining healthcare business so as to maximize value for shareholders.

Both segments have an opportunity to improve earnings and cash flow in the next few years, but the opportunity comes from vastly different places. Aviation is GE's standout segment, but it faces some near-term margin pressure due to the ramp in LEAP production -- engine manufacturers make their real money from aftermarket revenue, which won't kick in until a few years after engines are delivered.

In addition, as Culp said, "We are in the midst clearly of a platform transition with the narrow-bodies," which will create some margin pressure. This matters because aircraft component suppliers tend to make a higher margin on products for legacy aircraft as they have had more time to cut the unit cost of production.

Power is coming from a much weaker position, but even here there was some cause for optimism. Culp was asked if the overcapacity in the gas turbine industry was causing irrationality in pricing in the industry. Fortunately, he replied that he hadn't seen anything "wildly irrational." Indeed, GE's competitors are also cutting capacity, and this could help stabilize pricing in the industry.

The other positive is Culp's candor regarding the "need to deliver" on the numbers in power -- a refreshing change from the overpromise/underdeliver age of former CEOs Jeff Immelt and John Flannery. Management has been talking of underlying signs of improvement in its order book, but it hasn't shown up yet in the numbers. This matters because a turnaround in power is an integral part of the investment thesis for GE.

Putting it all together, the 737 MAX grounding and ongoing pressure on FCF are concerns, but from a strategic perspective, Culp has a done a good job of allaying fears that GE will have to engage in a fire-sale of its prized assets. Moreover, he's reset investor expectations, so for the first time in a few years, GE looks like it's in a place where it could under-promise and over-deliver, particularly in power. As Culp said, now it's time to deliver.