Please ensure Javascript is enabled for purposes of website accessibility
Log In Help Join The Motley Fool
Free Article Join Over 1 Million Premium Members And Get More In-Depth Stock Guidance and Research
By Matthew Cochrane - Jun 8, 2019 at 10:01AM

The $21.5 billion blockbuster deal makes it the third-largest in fintech history. Three of the four largest such deals have taken place this year. What's going on?

In the latest blockbuster fintech deal to be reached this year, Global Payments (GPN 2.14%) and Total System Services (TSS) have reached an agreement to merge, creating a "technology-enabled payments company with extensive scale and unmatched global reach."

Global Payments primarily facilitates payment processing for merchants, while Total System Services, commonly referred to as TSYS, chiefly handles payment processing for card-issuing financial institutions. The merger is expected to create a more holistic company that handles both sides -- the merchant's and the bank's -- of every card payment transaction. The combined company will have a worldwide customer base of 3.5 million merchants, 1,300 financial institutions, and 600 million cardholders, and will facilitate approximately $50 billion of transactions per year. 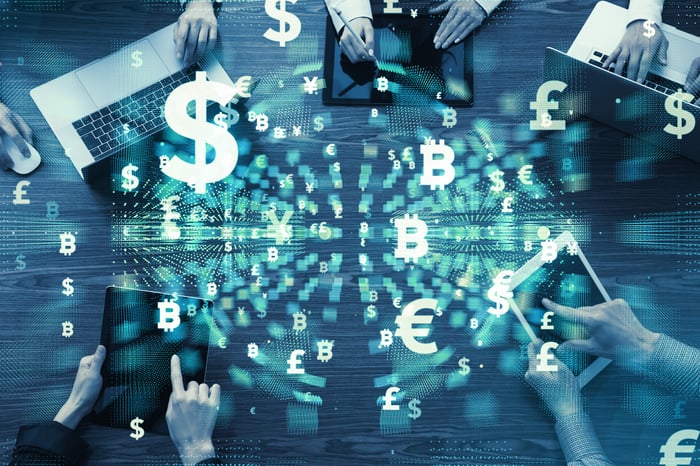 Global Payments shareholders will hold 52% of the combined company, and CEO Jeff Sloan will still hold the position after the merger is finalized. Image source: Getty Images.

Under terms of the arrangement, Total System Services shareholders will receive 0.8101 shares of Global Payments for every share. The deal values TSYS at approximately $21.5 billion, representing about a 20% premium to the company's value before the merger was made public. Upon completion of the merger, Global Payments shareholders will own about 52% of the newly combined company and TSYS shareholders the remaining 48%. If it is finalized, it will be the third-largest fintech deal of all time, according to S&P Global Market Intelligence.

The 12-member board of directors will be evenly split between Global Payments and TSYS members, with Global Payments CEO Jeff Sloan keeping his role at the new company and TSYS CEO Troy Woods becoming chairman of the board. For the time being, at least, both companies' headquarters, about 100 miles apart in Georgia, will remain in operation. The transaction is expected to close by the end of the calendar year.

The rationale given for the merger by both management teams was the significant revenue and cost synergies the deal would help the new company realize. Management projects that the agreement will result in annualized cost savings of $300 million and create $100 million in annual revenue synergies.

The $100 million in annual revenue synergies should also be recognized within three years and will largely be created by cross-selling opportunities within each legacy company's customer base. Most of these opportunities will come from leveraging TSYS's relationships with banks, especially those in foreign markets, to create joint ventures or use as referral partners to capture additional merchant-acquiring business. Bready added, however, that there was also the matter of cross-selling each company's strengths into the other's merchant base:

But I also don't want to lose sight to maybe the smaller, more tactical opportunities that exist to cross-sell products and solutions across our existing book of SMB [small and medium businesses] customers ... Our ability to sell complementary products that we each have strength in across those base of business customers today is very exciting. Those are small-ticket items each individually. But when you aggregate it across almost 2 million merchant locations in the United States, the numbers start to add up very quickly...

The price tag places this as the third-largest fintech agreement ever. The crazy thing is that three of the largest four such deals have taken place in the first half of 2019. In January, Fiserv (FISV 0.59%) and First Data Corp. announced a $20 billion-plus acquisition, and then in March, Fidelity National Information Services (FIS 0.88%) agreed to acquire Worldpay for a whopping $35 billion. All of these deals featured players in the payment processing arena, both on the merchant and financial institution side. More important than even the mammoth sizes of these mergers and acquisitions is why they're all happening now. 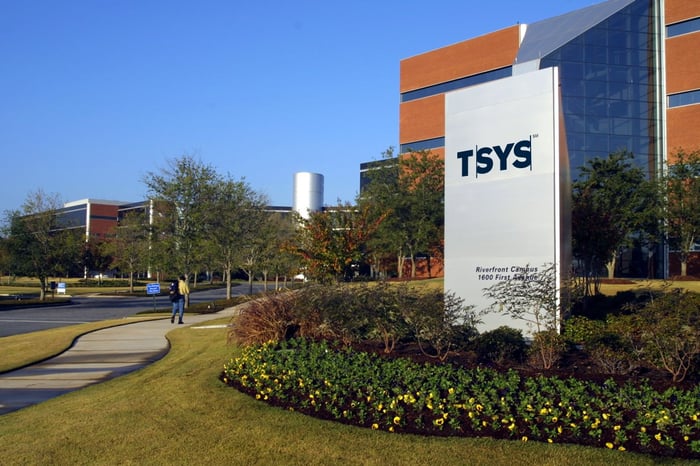 TSYS shareholders will own 48% of the combined company. CEO Troy Woods will continue as the chairman of the board of the newly combined entity. Image source: Total System Services Inc.

Noticeably, the technological disruption the industry is seeing was called out in all three conference calls following the deals, with Square (SQ 2.73%) being specifically called out twice.

I mean, a lot of banks, especially in the community spaces, are worried about companies like Square. And what do you do where Square has a growing -- a rapidly growing point-of-sale lending business? And that's going to take money out of the revenue line of the banks.

In both prior instances, the companies involved talked about the technological change the industry was seeing as an impetus for their deals. When Square was mentioned by Global Payments CEO Jeff Sloan, the tone was subtly different:

So I don't know who came first in doing this, whether it was us or someone like Square, but we've been selling payroll to merchants for a very long time. Today, you can walk into a small merchant ... and using your phone, can underwrite that merchant, you can offer payroll services today. You can also offer lending. The difference with us, it's not on our balance sheet and we're not taking credit risk, but we tap into APIs to 60-plus lenders, and we're making loans on that today at Global Payments ... So it's very much an ecosystem.

In the case of Global Payments, Sloan sees the company as a coconspirator in bringing technological disruption to the payments industry, with the TSYS deal being a part of the company's attack, not a defensive reaction to change. He could be right.

Global Payments has successfully pursued a strategy of embedding its payment solutions into software vertical stacks for niche industries via acquisitions, partnerships, and internal development. This essentially makes Global Payments a payments ecosystem, not just a provider of a commoditized payment processing service.

Several times during the company's conference call announcing the deal, management reinforced that the all-stock merger would allow the balance sheet to remain solid enough for the company to continue its software acquisition strategy. With the deal being immediately accretive to earnings and seemingly keeping Global Payments' strategy intact, the combined company looks well-positioned in the constantly changing payments industry.

After Coronavirus, These 3 Tech Stocks Are Poised to Thrive