While results were good, the outlook is even better.

Three years ago, when Terry Handley took the reins as CEO at Casey's General Stores (CASY 1.70%), the company was having difficulties. The company -- which operates primarily in Middle American towns of 5,000 people or fewer -- had a booming pizza business to complement its basic grocery and gas sales. As it looked to expand, however, it continually failed to live up to its own expectations.

It's fitting then that Handley -- in his last quarter as CEO -- seems to have helped right the ship. The company reported earnings this week that show a reversal of trends. More important, management sees a brighter future in the year ahead. 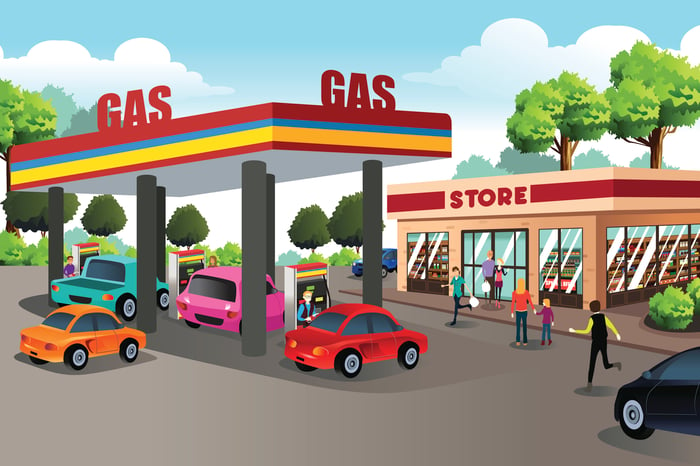 Before we dig into the details of the company's fiscal fourth quarter, let's review how it performed on the headline numbers.

Shareholders should know that the revenue figure needs to be taken with a grain of salt. Gas is the primary driver of sales, but it is a low-margin business that's almost entirely out of the company's control. Instead, more profit comes from the things that people pick up while filling up: groceries and prepared foods.

From 30,000 feet, one of the big stories is that the company showed profit-making leverage. The cost of goods sold rose just 2.5%, while operating expenses at existing stores actually dipped 1.1%. That helped far more money drop to the company's bottom line -- resulting in the large earnings growth.

As you can see in the table below, the company hit all its goals when it came to its nonfuel lines of business.

Speaking on the conference call with analysts, management said that packaged-beverage sales -- including of beer -- were a strong driver of comparable-store sales for groceries. Favorable weather in April was cited as a strong catalyst for that increase.

Equally important, the company is becoming leaner while accomplishing all these goals. It announced that many areas of its "Value Creation Plan" had been realized, continuing the trend from a quarter ago:

Hitting key targets for in-store sales and cutting costs through the Value Creation Plan have given investors a lot to cheer about.

The company also announced the retirement of Handley, who has been with Casey's for 38 years. In his stead, the board will be bringing on Darren Rebelez, who is currently president at IHOP and before that served as COO at 7-Eleven.

Beyond that announcement, there were other tidbits of note:

Perhaps most encouraging for investors, management sees the positive trends continuing. With fiscal 2020 already underway, these are the comparable-store (comps) forecasts for the year.

Study this and you see management is expecting both more sales and greater margin on those sales.