An overview of critical numbers and themes that shareholders should grasp in advance of the furniture giant's upcoming report.

Contemporary office-furnishings manufacturer and design house Herman Miller (MLKN -1.71%) is scheduled to report fiscal fourth-quarter 2019 earnings on June 27. Shares of the influential corporate-workspace pioneer have soared nearly 28% so far in 2019. Below, let's look at key numbers and themes that will inform investors' reactions following the fourth-quarter release.

Herman Miller provides a pretty spare set of numbers that comprise its outlook each quarter. For the fourth quarter, management has advised shareholders to expect revenue of between $645 million and $655 million. In the middle of this range, the company will generate solid organic year-over-year growth of roughly 5%. 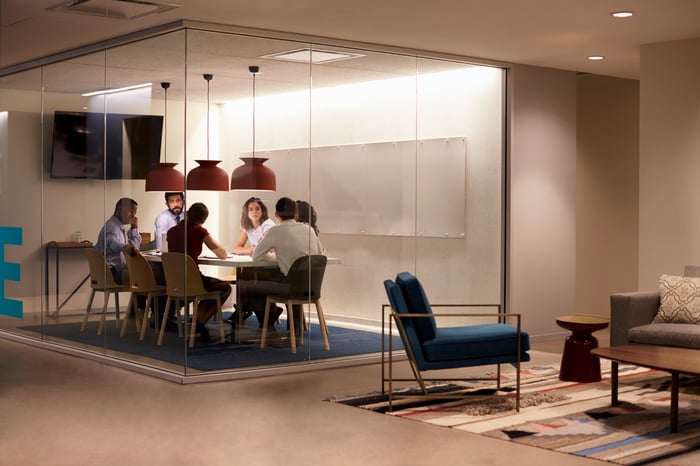 In addition to watching actual revenue and earnings results versus management's guidance, investors will focus on order flow. Last quarter, the company reported 8% organic order growth, with increased orders across each of its major segments: North America, ELA (Europe, Latin America, and Asia), consumer, and specialty.

The relative health of organic order flow in North America will be especially scrutinized. Not only does this segment represent roughly half of Herman Miller's sales in a given quarter, its orders are driven by corporate expansion and renovation projects and are thus variable and difficult to predict from period to period. In the fiscal third quarter, organic orders in North America expanded at a healthy year-over-year clip of 5.5%, to $315 million.

A second theme to follow is the manufacturer's surprising recent success with consumer sales in the U.S. While Herman Miller has followed other manufacturers and retailers by investing in e-commerce capabilities, it's also currently expanding its retail footprint via the opening of Design Within Reach (DWR) studios. These stores provide consumer access to Herman Miller's iconic furniture, and the organization was set to open three locations (including one remodel) in the fourth quarter.

In addition, Herman Miller is building out new locations of its recently acquired HAYS furnishings brand. After the launch of two flagship HAYS stores in California in the third quarter, shareholders will look for an update on the status of several locations under development in the Chicago area.

Finally, investors will look to understand Herman Miller's strategy on import tariffs going forward. As I discussed last quarter, the company has managed a 10% tariff on imported goods through supply-chain optimization and "pain sharing" with vendors. During the company's third-quarter earnings conference call in March, CFO Jeff Stutz expressed some optimism that tariffs would remain at the 10% level. He also indicated that, if these duties escalated to a threatened level of 25%, the company would be forced to look at price increases passed on to customers to absorb the impact.

Of course, since that earnings call, the Trump administration has followed through on its threat, and as of May 10, goods shipped into the U.S. from China are subject to a 25% import tariff. This new development may stymie the recent momentum that Herman Miller has exhibited in both revenue and order flow.

Investors will undoubtedly be anxious to hear management's pricing plan to offset what may be a significant impact on the company's gross margin in the coming quarters.