The top electric-car maker's CEO has some lofty dreams.

To hear Tesla (TSLA 2.52%) CEO Elon Musk tell it, by next year Tesla will have overcome its recent financial challenges, will be operating a fleet of robotic taxis, and will offer cars that can drive themselves. Moreover, anyone with any other brand of car will be frustrated that he or she now owns the technological equivalent of a horse and buggy or a flip phone.

Did he actually say all that? Yep, although he partially walked back the robotic-taxi comment later.

Is it a complete fantasy? Maybe not entirely, but it's probably less likely than predicting that Tesla will wind up pretty much where it is today. But let's take a dive into Tesla's current situation to see if any of these things might come to pass by mid-2020. 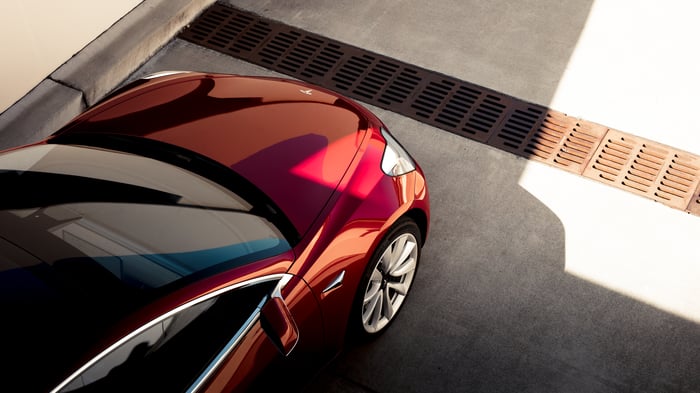 The Tesla Model 3 has been a top seller. Will it still be a year from now? Image source: Tesla.

In the beginning, Tesla was a luxury automaker, with one product: the high-end luxury Tesla Roadster sportscar with its $90,000 price tag. Since then, the company has tried to broaden its appeal by ramping up production of less expensive cars, including the Model 3 sedan (starting price: $35,000), the upcoming Model Y crossover SUV (starting price: $47,000), and a possibly soon-to-be-unveiled electric pickup truck that will purportedly rival the Ford (F -0.68%) F-150 (starting price: "less than $50,000").

The problem is that more expensive cars have higher margins. When you start selling less expensive vehicles -- and building giant Gigafactories and ramping up production to do so -- the amount of money you make per car takes a hit. Furthermore, when you're investing in technological innovations at the same time to ensure your cutting-edge vehicles stay on the cutting edge, it further eats into your available resources, even as it expands your potential customer base.

The good news for Tesla is that some of those investments seem to be paying off. The company appears to be able to manufacture batteries for as much as 20% less than the competition, for one thing, and it's managed to notch a couple of profitable and free cash flow-positive quarters in Q3 and Q4 2018. If it can keep this up, Tesla might actually be in a stable financial and operational position next year.

But there's one big problem.

Tesla posted back-to-back profitable quarters in Q3 and Q4 2018, but it sure didn't in Q1 2019. Worse, a lower-than-expected number of quarterly deliveries -- especially for the high-margin models X and S -- fueled speculation that demand for Teslas might be drying up. That problem may have been exacerbated by a federal tax credit decrease for purchasing a Tesla that kicked in Jan. 1. The tax credit will drop again, from $3,750 to just $1,875, on the first of July. It's also possible that potential Model X buyers are holding out for the less expensive Model Y, which is set to roll out in late 2020.

Lower demand would be a big problem for the carmaker, which doesn't invest in traditional advertising such as TV commercials. It also shuttered most of its Tesla stores, relying instead on word of mouth and news coverage to spread the word about its cars.

Luckily for Tesla, it gets a lot of news coverage. But if demand is already drying up for its existing models, and with the Model Y and electric pickup truck far from production, Tesla could find itself back in a precarious financial spot, with not enough revenue coming in to fund its new projects.

For his part, Musk disputes that sales are declining. He says that both sales and orders for all three of Tesla's current models are outpacing production. But a leaked May email to employees warned that Tesla had only 10 months to become profitable and announced a "hardcore" cost-cutting program. Those aren't usually hallmarks of a financially healthy company.

Pie in the sky

We've all learned by now to take Musk's statements with a grain of salt. After all, I could spend pages and pages writing about the promises Musk has made that haven't come to fruition.

His comments that autonomous driving would be ready by the end of 2019 seem particularly laughable, considering Consumer Reports just panned Tesla's Autopilot lane-changing feature as "far behind a human driver's skills." However, Musk recently scoffed at LIDAR technology -- essentially, a radar system that uses laser beams instead of radio waves -- which just about everyone in the autonomous-vehicle space uses except Tesla. Musk relies instead on vehicle-mounted cameras and radar systems. In other words, even if some of the regulatory hurdles to introducing this technology were worked out, it's not clear that existing Tesla vehicles would make the cut.

For now, nobody, not even Alphabet's Waymo, seems anywhere close to rolling out a mass-market autonomous vehicle within the next year, LIDAR or no LIDAR. But the incident illustrates how Tesla may be trying to do too much all on its own. Other, larger companies that have more resources are teaming up with partners to develop electric-vehicle and automated-driving technology, including Waymo's partnerships with Fiat Chrysler and  Tata Motors' Jaguar, or Ford's with Volkswagen, or Hyundai's with start-up Aurora.

Tesla's insistence on trying to beat the big guns may not work out so well.

We were here first

One thing that's unclear is whether people interested in buying a Tesla are more interested in buying an electric vehicle, or just buying a Tesla. Tesla's brand has been rapidly increasing in value, according to market researcher Kantar Millward Brown, to the point that it's now the eighth most valuable automotive brand. But as its competitors get ready to roll out electric vehicles of their own, potentially at similar or lower price points, will it have an impact on Tesla's sales?

We'll find out sooner rather than later. Rival automaker Ford is planning to launch its own battery-electric crossover SUV based on the Mustang in 2020, and it's promising 300 miles of range. Kia is also expected to begin selling an all-electric version of the Soul that year. And unlike Tesla, Ford and Kia have pretty good track records when it comes to launching vehicles on time.

Where that leaves Tesla

So given all of this, where is Tesla likely to be in a year?

Well, barring a miracle, a completely self-driving fleet isn't going to happen. And considering Tesla hasn't managed to post more than two profitable quarters in succession, it's unlikely the company will have made much, if any, progress on putting its financial house in order. It would take sustained profitability to make that happen.

A lot depends on whether the slump in Tesla sales is a blip or a trend. And with the slew of other options coming available in 2020, that's going to depend on whether consumers are really determined to get a Tesla in 2019 or whether they're willing to wait and explore other options. I'm not so sure they won't wait, which would leave Tesla in a similar position to today: unprofitable and burning cash, but with hot prospects "just around the corner."

Still, as with most things Tesla, I wouldn't bet against the stock based on that theory.