Please ensure Javascript is enabled for purposes of website accessibility
Log In Help Join The Motley Fool
Free Article Join Over 1 Million Premium Members And Get More In-Depth Stock Guidance and Research
By John Rosevear - Updated Dec 10, 2018 at 8:20AM

New and old automakers are gearing up to challenge Tesla with these fun, interesting electric vehicles.

At the same time, Tesla has inspired other start-up electric-vehicle makers, some of whom are aiming for the same market that Tesla has so far had for itself. On top of that, the mainstream automakers are drawing inspiration from Tesla as they design their own electric vehicles for the mass market. 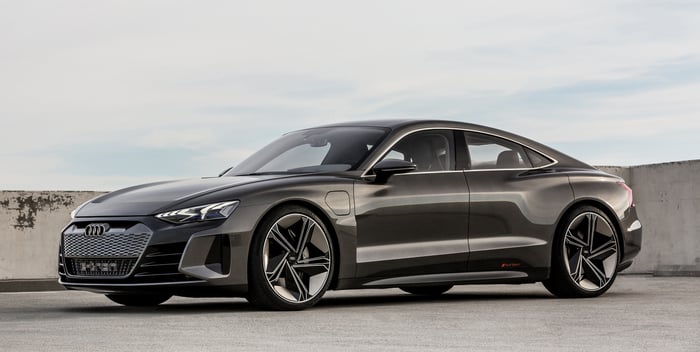 If there's one vehicle on this list that could fairly be called a Tesla-fighter, Audi's hot e-tron GT is it. Looking a lot like a souped-up Audi A7, the e-tron GT appears to borrow quite a bit under the skin from its corporate sibling, the upcoming Porsche Taycan -- and it looks to be aimed squarely at Tesla's Model S.

Audi said the e-tron GT's dual motors put down a total of 590 horsepower, enabling a 0-to-100 kilometers-per-hour time (or 0-62 mph) of 3.5 seconds. The company claimed over 249 miles of range using the new, stricter European WLTP standard and said that it could be recharged to 80% in just 20 minutes with its 800-volt charging system, one of the elements borrowed from Porsche.

How big is the battery? Audi said it's rated at over 90 kilowatt-hours but didn't give specifics.

Officially, the Audi e-tron GT is a "concept," a show car. But Audi said that something very much like it will go into production in about two years, following the just-launched e-tron SUV and the upcoming e-tron Sportback. 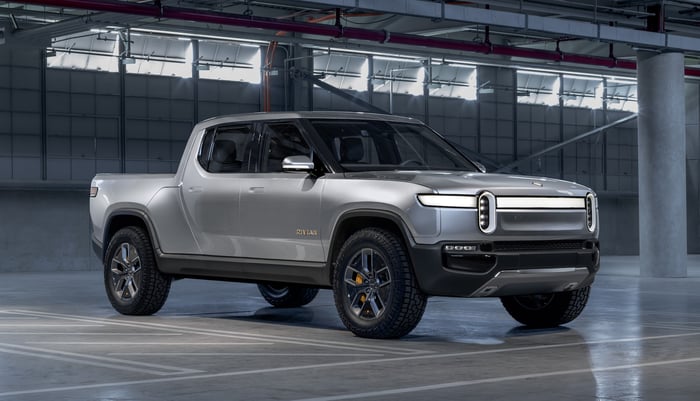 Both vehicles are based on what Rivian calls its "skateboard" platform, which combines motors, batteries, suspension, and cooling in an integrated, low-slung package. The Rivians have four electric motors, one at each wheel, to maximize off-road ability and on-road acceleration. These are quick trucks: Rivian promises a 0-to-60 mph time of just three seconds. 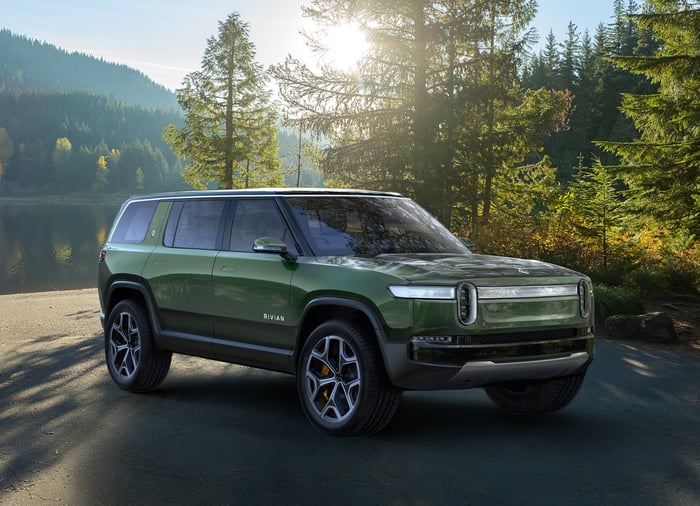 Rivian's R1S is a 7-passenger electric SUV that shares underpinnings with the R1T pickup. It will go into production in late 2020, Rivian said. Image source: Rivian Automotive LLC.

The R1T and R1S will be offered with three battery-pack options, giving range of about 230, 300, or 400 miles in the pickup. The SUV will have a bit more range at each tier, Rivian says. Pricing starts at $69,000 for the pickup and $72,500 for the SUV, before federal and state electric-vehicle incentives. Both are expected to go into production by the end of 2020 at Rivian's factory in Illinois. 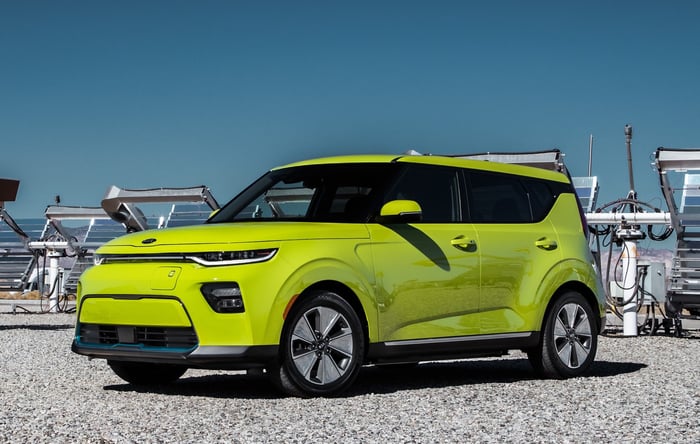 Kia's all-new Soul EV boasts impressive torque and a battery that should give it well over 200 miles of range. Image source: Kia Motors.

As expected, Kia Motors (NASDAQOTH: KIMTF) showed off an all-new version of its small Soul crossover in Los Angeles. It also showed off the all-new 2020 Soul EV, an all-electric version of the little urban runabout with surprisingly strong specifications.

The all-new Soul EV will come standard with a 64-kWh battery driving a single electric motor with 201 horsepower and 291 foot-pounds of torque, enough to make the little Kia a fun, zippy driver. Also standard: a slew of driver-assist features and DC fast-charging capability, a nice touch.

Kia didn't announce the Soul EV's range -- it's still being tested -- but it's expected to be over 200 miles, a big upgrade over the current model's 111-mile range. But despite the upgrade, expect the all-new Soul EV's pricing to start close to the current model's $33,950 base price before incentives.

An electric commercial van from VW

We know that Volkswagen (VWAGY 0.76%) is gearing up to launch a line of long-range battery-electric vehicles under its "I.D." sub-brand. We've seen several of them, including the so-called I.D. BUZZ, a minivan that riffs on the iconic VW Microbus of the 1960s. 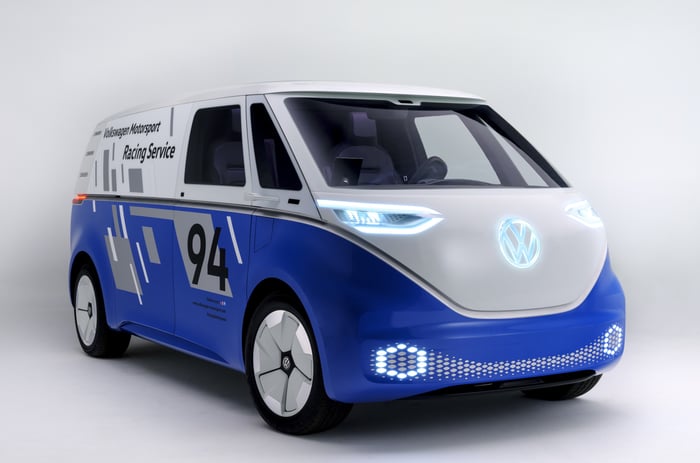 But we hadn't seen this until last week. The Volkswagen I.D. BUZZ CARGO (yes, in capital letters) is an I.D. BUZZ revamped as a commercial vehicle. VW said it could come to market in Europe as early as 2022, when the regular I.D. BUZZ is set to make its debut -- and it added a few more details about what to expect from the I.D. line as a whole.

Specifically, VW said the I.D. BUZZ CARGO will have a range of between 200 and 340 miles on the WLTP test cycle, depending on which battery pack is selected. A 48 kWh battery pack will give about 200 miles of range, sufficient for an urban delivery vehicle -- but if more is needed, there will be larger batteries available up to 111 kWh. VW also said the 111 kWh battery can be charged to 80% capacity in 30 minutes with a 150 kilowatt DC Fast charger.

The van itself isn't really big news, of course. It's been clear for a while that VW wants to sell more commercial vehicles -- in fact, its partnership with Ford Motor Company (F 2.33%), announced earlier this year, is centered on commercial vehicles -- so it's no surprise that VW will have an electric commercial-vehicle entry. But the details about the available battery sizes are noteworthy clues as to how VW will structure its I.D. lineup when it begins coming to market next year.