A major oil and gas company will use the powerful new system to run data-heavy workloads.

IBM (IBM 0.40%) currently holds the No. 1 and No. 2 spots on the list of the world's most powerful supercomputers. The company's Summit and Sierra systems, powered by its POWER9 processors and accelerated by NVIDIA's GPUs, were delivered to the U.S. Department of Energy last year.

IBM will lose the crown in 2021, when an AMD-powered supercomputer designed by Cray goes online. But the work IBM did to build Summit and Sierra is now being applied to the commercial supercomputer market. IBM announced Tuesday morning that it had built a new supercomputer for Total, a multinational oil and gas company, that it claims is the world's most powerful commercial system. The Pangea III supercomputer is based on the same technology that powers Summit and Sierra, and it has enough computing power to claim the No. 11 spot among both public and private supercomputers globally. 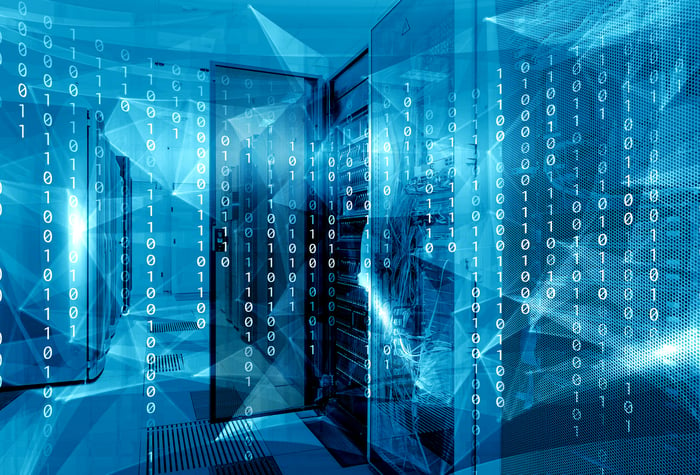 Like Summit and Sierra, Pangea III is built around IBM's POWER9 processors and accelerated by GPUs from NVIDIA. The system has a total computing power of 25 petaflops, meaning it can do 25 quadrillion floating-point operations per second. For comparison, the top-ranked Summit has a peak computing power of around 200 petaflops.

Pangea III uses 1.5 megawatts of power, one-third the power of its predecessor, and Total reports that energy consumption per petaflop has been reduced by more than 90%. IBM's CPUs are connected to NVIDIA's GPUs using NVIDIA's NVLink technology, which IBM claims has memory bandwidth 5.6 times faster than systems powered by Intel processors.

Total will use Pangea III for producing high-resolution seismic images, running advanced reservoir simulation models, and improving how it selects new ventures. "Pangea III's additional computing power enhances Total's operational excellence. It enables Total to reduce geological risks in exploration and development, accelerate project maturation and delivery, and increases the value of our assets through optimized field operations, with all this at lower cost," said Arnaud Breuillac, president of Total exploration and production.

While Intel and AMD get most of the attention when it comes to CPUs, IBM's Power business is enjoying a period of growth. Power sales rose 9% in the first quarter, marking the sixth consecutive quarter of growth. The first systems based on IBM's POWER9 processors were announced at the very end of 2017.

This supercomputer announcement comes on the heels of another piece of Power-related news. IBM announced on June 17 that POWER9-based virtual servers are now available on the IBM Cloud, allowing customers who run Power systems to more easily adopt a hybrid cloud approach. IBM is betting big on the hybrid cloud, and the data backs up that strategy: IDC expects 90% of the largest enterprises in the world to embrace integrated hybrid and multicloud tools and strategies by 2024.

IBM's supercomputer business represents a small part of its total revenue, but it allows the company to demonstrate the number-crunching power of its hardware. IBM's POWER9 processors are designed for data throughput, positioning them to run artificial intelligence and other data-heavy workloads. New POWER10 processors are expected from IBM sometime in 2020, and this focus on data is likely to remain.

While this Total supercomputer deal won't move the needle for IBM, it's still a meaningful win for the company's hardware business.