The U.S. is about to reclaim the top spot on the list of the world's fastest supercomputers. Summit, a $200 million system designed by International Business Machines (NYSE:IBM) for the Department of Energy's Oak Ridge National Laboratory, is tailor-made for big data and artificial intelligence (AI) workloads. Capable of 200 quadrillion floating-point operations per second when fully operational, Summit is expected to handily beat out the Chinese system that currently tops the charts.

IBM won the contract to build Summit and a smaller system back in 2014. The deal came in the early days of IBM's effort to bring new life to its POWER chips. Summit features more than 9,000 of IBM's POWER9 processors, as well as roughly 28,000 GPUs from NVIDIA (NASDAQ:NVDA). The system can move 25 gigabytes of data per second between nodes. 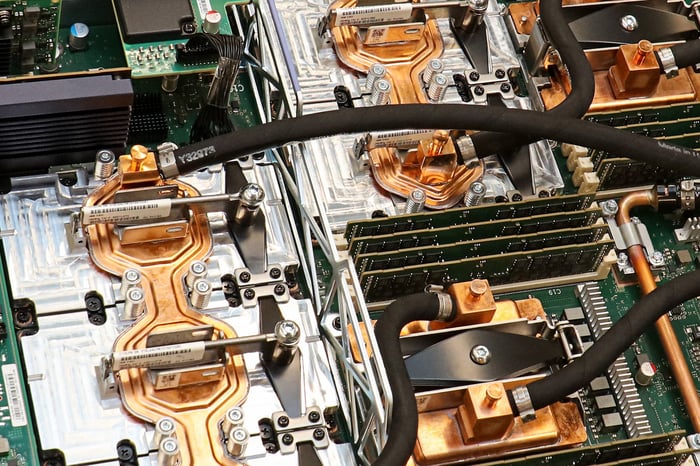 In the press release announcing the deal nearly four years ago, IBM explained the need for an architecture built around the movement of data: "The current approach to computing presumes a model of data repeatedly moving back and forth from storage to processor in order to analyze and access data insights. However, this approach becomes unsustainable with the onslaught of big data because of the significant amount of time and energy that massive and frequent data movement entails."

Speaking to CNBC, CEO Ginni Rometty said: "This is really one of our greatest achievements. It is the fastest, it is the smartest supercomputer."

NVIDIA CEO Jensen Huang added: "The architecture for Summit is going to be the way computers are built in the future. It's a multibillion-dollar industry."

Summit is a major milestone in IBM's attempt to position its POWER9 chips as an alternative to Intel chips for AI workloads. Much of Summit's processing power comes from NVIDIA's GPUs, but the central processors are still important.

Case in point: Alphabet's Google began deploying POWER9 processors in its data centers earlier this year. Google uses its own accelerator, the Tensor Processing Unit, for some AI workloads, but it found that POWER9 chips paired with these accelerators offered advantages over x86 chips. An ultrafast accelerator isn't as useful if it can't be fed data fast enough.

In total, the deal to build Summit and its smaller sibling is worth around $325 million. For IBM, with annual revenue close to $80 billion, that's a drop in the bucket. But Summit is the most notable demonstration yet of the AI capabilities of IBM's POWER9-based systems. It can act as a showcase project as IBM pushes its POWER9 chips as a viable alternative to Intel.

IBM's ambition is to win a meaningful share of the hyperscale data center and high-performance computing market. An IBM executive put the target between 10% and 20% of both markets back in 2015. It took Google years to reach the point where it could deploy IBM's chips for production workloads, so the path forward is still a long one. But IBM is making tangible progress.

For IBM, there may be no better advertising than having its chips inside the world's fastest computer.