Success often comes from the top down. A good CEO sets the tone for his or her company and inspires employees to do the best job possible.

That's why investors should look for companies with a top executive who's not just well-liked by the public, but also by the people who work for her or him. The annual Glassdoor Employee Choice awards used data from workers "who voluntarily provide anonymous feedback by completing a company review about their CEO's leadership, along with insights into their job, work environment and employer over the past year," according to a press release.

These rankings aren't about public perception. They rank the CEOs of companies with at least 1,000 workers using at least 100 ratings from employees during the eligible period. 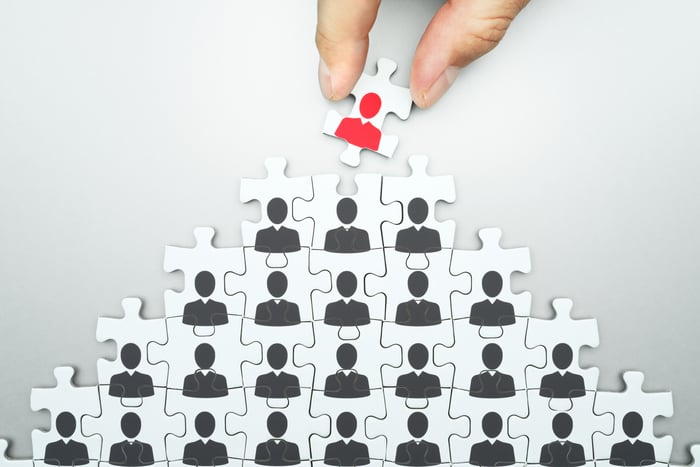 A good CEO can set the tone for the whole company. Image source: Getty Images.

Who are the top big company CEOs?

The majority of the top-50 CEOs (27) come from technology companies. That's up from 26 last year. That was followed by healthcare with 12, up from 11 in 2018; manufacturing with eight; and both retail and restaurants claiming seven spots. (Note: This is at the time of the awards, as some CEOs have since departed.)

What's clear from the rankings is that there's very little separation between the top CEOs. The top-ranked leaders scored a 99% approval ranking from their employees, while the 20th-ranked CEO still scored a 96% approval rating.

"Today's job seekers are looking for leaders who share their values and will empower them to bring their full selves to work," said Glassdoor COO Christian Sutherland-Wong in a press release. "More and more, we're seeing Top CEOs make decisions to shape the culture of their organizations to help recruit and retain quality talent, which has a direct correlation to fueling business success."

What does this mean for job seekers?

While a good CEO does not guarantee a pleasant working environment, it's a very good sign. As you search for a job, it's smart to research a company's top boss. If it's someone on this list, that's a strong point in favor of your accepting the position.

Most CEOs, however, don't make this list -- and the leaders of smaller companies may be harder to find information on. When you consider accepting a job at a smaller company, try to talk to present employees to get their opinion. Look to see if the average person has been there for a long time -- that's generally a good sign -- and learn what you can about the CEO's reputation.

Your position may be many levels removed from the CEO, but that doesn't mean the CEO won't affect you. Awful bosses tend to create negative cultures that infect the entire organization. It's important to figure out whether that's the case before you make the decision to accept a job.