Snap and Zynga reinvent the battle royale genre with a “bite-sized” game on Snapchat.

Back in April, Snap (SNAP 7.07%) announced Snap Games, a real-time multiplayer platform for original in-app games. Zynga (ZNGA) was introduced as one of the platform's most prominent partners, and the publisher recently introduced its first Snapchat game -- Tiny Royale, a "bite-sized" battle royale game for up to 30 players.

Players can form squads with up to four players then battle other squads on a shrinking map littered with weapons and health packs. In other words, it follows the template of popular battle royale games like Fortnite, PUBG, and Apex Legends.

But unlike those games, Tiny Royale isn't a 3D shooter -- it's a top-down shooter with lower-end graphics. However, distilling the addictive elements of the battle royale genre into snack-sized battles with Snapchat friends represents a fresh new take on an aging genre. Snapchat users can launch the game directly from the app's chat feature and use text- and voice-based chat as they play.

Zynga's publishing chief Bernard Kim stated that the publisher "was excited to remix the battle royale genre into a fast-paced game," while Snap Games chief Will Wu called Tiny Royale a "perfect example" of "exploring new ways for friends to play together." Let's take a look at how this new game -- and Snap Games in general -- could strengthen both companies.

A smart move for Snap

Snap's biggest challenge over the past year has been its peaking user growth. Its daily active users (DAUs) rose 2% sequentially to 190 million last quarter, but that still represented a 1% dip from a year earlier.

To offset its slower user growth, Snap is aggressively boosting its average revenue per user (ARPU) with several strategies. It sold more automated ads at cheaper rates, redesigned its Android app to be smaller and faster, opened up the platform to let developers add new features like AR lenses and games, and launched Snap Original shows to keep users tuned in. All those efforts clearly paid off, as its ARPU consistently rose and outpaced its DAU growth.

Launching in-app games is another piece of that strategy. Snapchat users who play games will likely spend more time in the app -- which increases their daily exposure to ads, boosts the value of its ads to companies, and widens its moat against Facebook's (META 3.01%) Instagram.

A strategic expansion for Zynga

Zynga has been a resilient player in the crowded mobile gaming market, thanks to the strength of games like FarmVille, Slots, CSR, Merge Dragons, and Zynga Poker. 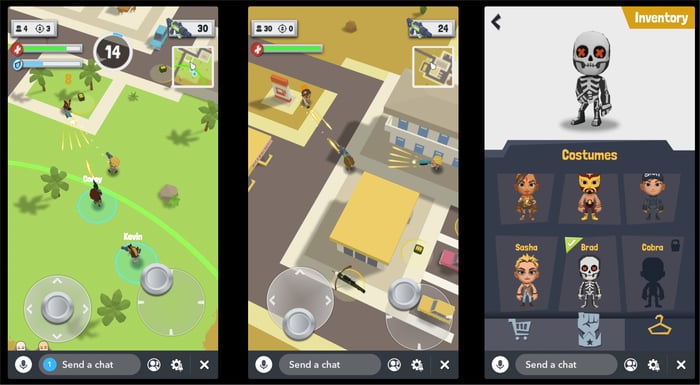 Last quarter, Zynga's revenue rose 27% annually as its total bookings surged 64%. That growth was attributed to its acquisitions of Gram Games and Small Giant Games, as well as the strength of newer games like Empires & Puzzles, Merge Dragons, and 1010.

But Zynga faces similar issues as Snap -- its user base is shrinking due to declines in older games (like Zynga Poker, Words With Friends, and Solitaire), but it's offsetting those declines by increasing its revenues per user.

Its mobile DAUs dipped 2% annually to 22 million last quarter, as its mobile MAUs (monthly active users) declined 12% to 72 million. Meanwhile, its average mobile daily bookings per DAU surged 80% to $0.17, thanks to its acquisitions, in-app purchases, and sales of more in-game ads.

The mobile gaming market is heavily saturated, so it's smart for Zynga to tether itself to Snap's newer and less-saturated platform for in-app games. After all, Snapchat has more DAUs than Zynga's entire ecosystem, and integrating itself with a social network worked before: In the early days of Facebook, Zynga's web-based games were widely played across the social network.

Facebook ended that partnership in 2012, and Zynga's stock still hasn't fully recovered from that blow. Therefore, partnering with Snap could make Zynga the dominant game publisher for a major social network again and simultaneously boost its DAUs and ARPU.

The launch of Tiny Royale is a shrewd strategic move for Snap and Zynga, but time will tell if this streamlined social take on the battle royale genre will take off. If it does, Snap's gaming ecosystem could attract more developers, and Zynga will gain a new audience of dedicated Snapchat gamers.