Cigarette giants' pricing power has always been one of their most attractive investment features, since the ability to raise prices while still retaining plenty of customers makes their dividend payments especially stable.

Altria (NYSE:MO) just flexed its pricing muscle again, raising the cost of its cigarettes by about $0.06 per pack on average, only two months after it had raised them by $0.09 to $0.11 per pack. 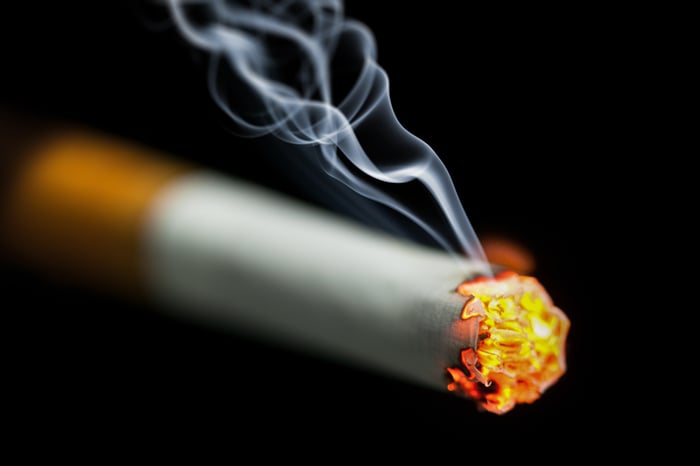 Tobacco companies typically raise their prices twice a year, once in the spring and again six months later. But Altria's increase after having just done so has analysts believing the cigarette maker could be making three price hikes this year, if not more.

While some see this as a bullish sign for the tobacco companies -- since it lets them offset declining volumes while bolstering the bottom line -- perhaps it should be seen as a more troubling development.

An inexorable spiral down

Cigarette smoking, at least in the U.S. and many other developed markets, is in the midst of a contraction that isn't expected to ever reverse. Last month, Nielsen data showed cigarette dollar sales fell almost 7% in the four-week period ending May 18 as volume sales plunged over 11%, the worst performance measured by the market researcher in four years. That news caused shares of Altria, British American Tobacco, and Philip Morris International to tumble.

While individual company data indicates the decline is not nearly as precipitous as what Nielsen showed, likely because of sampling bias due to major metropolitan areas being surveyed primarily, the direction of the trend is still correct. Sales are falling and will continue to do so.

The tobacco companies are nowhere near reaching "cigar butt" investment status -- a class of stock that has just about reached the end of its value, though there are still a few risk-free puffs remaining. (Warren Buffett once said of such stocks, "Though the stub might be ugly and soggy, the puff would be free.") But even the cigarette makers realize they need to pursue alternatives.

A future based on cigarette alternatives

Electronic cigarettes give manufacturers an opportunity to embrace what Philip Morris calls a "smoke-free future," (assuming regulators don't kill off the industry) while alternative nicotine products like snuff and snus allow them to still harness the strength of their tobacco business. Investments in cannabis producers are a potential long-term driver of growth, ignoring the irony that some governments are legalizing and cheering on the use of marijuana while still railing against tobacco.

Yet traditional cigarettes are still the backbone of tobacco companies, as they generate the vast bulk of their revenue. Offsetting volume declines by increasing prices remains one of the levers they can still pull. Because of nicotine's addictive qualities, smokers reluctantly pay up for the ability to smoke cigarettes, or what economists term price inelasticity of demand.

But smokers are more readily abandoning cigarettes and moving to alternatives (or quitting altogether) as tobacco companies squeeze them on one end and federal, state, and local governments do so on the other with onerous taxes (which, when raised, tobacco companies typically match with more price hikes).

Raising prices again as Altria is doing now will only further lock it and the industry into the vicious cycle of an accelerating decline.

More is not always better

It should also be worrisome that Altria actually feels the need to hike prices right now, and it could indicate that the Nielsen data may not be quite so off the mark as believed. If so, it would suggest Altria badly needs to bolster its margins to offset declines -- downturns it can't easily or readily make up for through its investment in Juul Labs or cost-cutting initiatives.

E-cigs, marijuana, and other alternatives are probably the future for Altria and its peers, and perhaps a cynic could say Altria's action is purposefully herding smokers in that direction sooner than they might otherwise switch.

But the future is not here yet, and going to the well too many times to extract tribute from their customers may cause the tobacco giants to suffer a backlash they're not ready to face.