Here are three stocks that could be big winners in the financial industry's technological revolution.

Financial technology, or fintech, is one of the biggest long-term growth opportunities in the market, but not all of the companies that operate in this space are great investments. We turned to three of our Fool.com contributors for investing ideas, and here's why they like DocuSign (DOCU -3.69%), Global Payments (GPN -2.66%), and Alibaba Group (BABA -3.11%) right now.

Matt Frankel, CFP (DocuSign): While it's not technically a fintech company, DocuSign is a technology company that stands to benefit tremendously from growth in the fintech industry. The electronic signature specialist is used by mortgage companies, banks, credit unions, real estate agencies, and more to expedite long-distance document processing and ensure compliance. 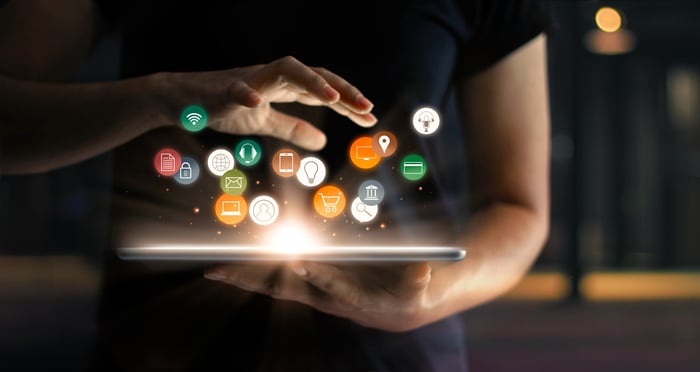 And it's fair to say that as fintech continues to evolve, the use case for Docusign's products will improve. According to a report by the American Bankers Association (ABA), digital lending is a $1 trillion addressable market, and only about half of larger banks and 38% of smaller banks currently have a digital loan origination channel.

To be clear, DocuSign isn't a cheap stock. Even after a recent post-earnings pullback, it trades for roughly 10 times its expected full-year sales (surprisingly, this is cheaper than many other cloud software companies). However, the growth numbers are impressive. Revenue grew 37% year over year in the first quarter, and customer count increased by 26%, The company is also profitable and free-cash-flow positive, something that several other recent IPOs can't say.

Finally, DocuSign has been investing heavily in new products, and these efforts aren't yet reflected in the company's numbers yet. Management claims that its addressable market could be as high as $50 billion now, and with just over $750 million in revenue over the past 12 months, it's fair to say that DocuSign's growth story could still be in its early innings.

Matthew Cochrane (Global Payments): Last month, Global Payments agreed to acquire Total System Services (TSS) for about $22 billion, joining the ranks of several other blockbuster fintech deals this year. The deal combines Global Payments' strength of processing card and digital payments for merchants with Total System's skill of handling the payments with card-issuing financial institutions. Combined, the company will be responsible for a customer base consisting of 3.5 million merchants and 1,300 financial institutions and will facilitate about $50 billion of payments per year.

Even before the merger was announced, however, Global Payments was a payments powerhouse. The company has been successfully shifting to a more software-centric business model, by embedding itself in industry-specific software vertical stacks through acquisitions, partnerships, and internal development. The result is something much more than a commoditized payment processing service; it creates a sticky payments platform with high switching costs for clients that will be reluctant to change payment processing providers if it means giving up a business-critical software platform.

In Q1, adjusted revenue rose to $1.04 billion, a 12.9% increase year over year, and adjusted earnings per share (EPS) grew 18.6% to $1.34. Before the merger was announced, Global Payments shares were trading at a forward P/E ratio of about 25. With the deal expected to create $300 million in cost savings and $100 million in revenue synergies, as well as be immediately accretive to EPS, that seems to be a relative bargain in a bull market that might be getting long in tooth.

Look to the East

Dan Caplinger (Alibaba Group Holding): When you hear Alibaba's name, financial technology might not be the first thing that comes to mind. The Chinese giant has become a huge leader in e-commerce, with a shopping search engine to go with plenty of exposure to the cloud computing services industry. Like many of its counterparts in the U.S., Alibaba has taken a scattershot approach to the internet realm, sticking its fingers into every niche in the hope of building a competitive edge and adding to its overall success.

But Alibaba has exposure to fintech through its one-third stake in Ant Financial, which runs a mobile payments platform that's extremely popular throughout much of the greater China region. Ant was once known as Alipay, and it's grown so large that some believe it could command a market capitalization of greater than $100 billion in its own right if it were spun off as a separate company.

Moreover, Alibaba is still looking at making investments in small upstart companies in a wide variety of areas, which could include fintech. As Alibaba spreads its influence across Southeast Asia and becomes an even more dominant player in e-commerce, the Chinese internet giant has plenty of opportunity to wield even more power in pushing fintech forward. The stock also comes at a bargain price right now thanks to trade-related tensions, offering an unparalleled value for those willing to think outside the U.S. box.