Don't believe the toymaker's spurned suitor -- it knows what it's missing.

Shares of Mattel (MAT 0.89%) have plunged nearly 40% over the past year, hurt most recently by the company's failed merger talks with privately held industry peer MGA Entertainment, owner of brands such as Bratz, Little Tykes, and L.O.L. Surprise.

Earlier this month, Mattel effectively rejected a second buyout offer from MGA that, based on subsequent comments from MGA founder and CEO Isaac Larian, reportedly not only included an underwhelming buyout premium but also came with the condition that Mattel's entire board of directors resign without further compensation and allow Larian to take over as its new chairman and CEO. Shortly thereafter, Larian suggested he was "looking at other options" to make a merger happen, a seeming hint that he would pursue a hostile takeover if Mattel didn't play nice.

But it all came crashing down last week when Larian issued a statement arguing that Mattel "cannot be salvaged" because of its "hostile board and management," its $4 billion in debt, and significant legal liabilities stemming from lawsuits over selling its faulty Fisher Price Rock 'n Play Sleeper product. 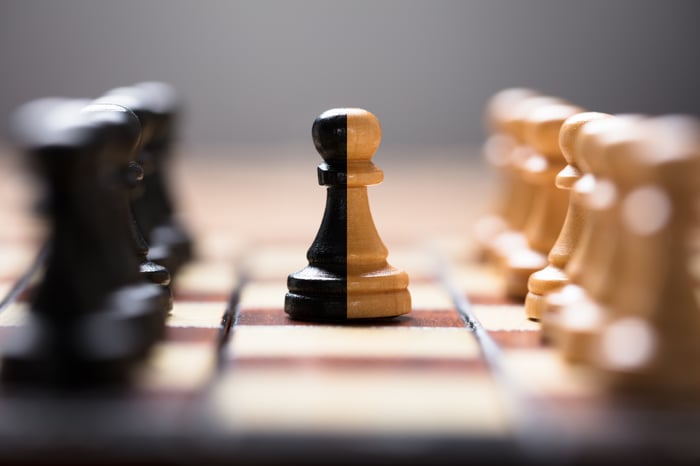 Call me crazy, but it seems MGA Entertainment would have been well aware of those risks before exhausting virtually every avenue it had to combine forces with Mattel.

Of course, even excluding the recent M&A-centric swings, it's an understatement to say Mattel shareholders have endured a roller coaster through their ownership of the toy maker over the past year. After plunging more than 30% in 2018 -- including a nearly 16% drop last December alone -- following the bankruptcy of Toys R Us, the company initially started 2019 on a high note.

Shares soared more than 20% in a single day in February as Mattel's cost-cutting efforts helped pave the way for its second straight profitable quarter, only to give up much of that gain weeks later, when the company provided tepid full-year guidance calling for flat gross sales at constant-currencies for all of 2019.

Mattel stock only drifted lower over the next few months, as investors worried over escalating trade tensions and the potential impact of tariffs on its bottom line. All told, those concerns overshadowed a slightly better-than-expected first-quarter 2019 report in late April, which saw its turnaround begin to take shape. For that, the company credited both early sales of Toy Story 4 products and the relative strength of legacy brands such as Barbie and Hot Wheels.

Undoubtedly sensing the opportunity to pick up Mattel at a discount as the market ignored its progress toward sustained, profitable growth -- and keeping in mind that MGA previously took an unsuccessful shot at acquiring Mattel in 2015 -- that's when we saw Larian and MGA try their hand yet again.

With that additional perspective, MGA today seems less like an acquirer that walked away from an unsalvageable business, and more like a spurned suitor now trying to damage the goods it can't have. If Mattel can sustain last quarter's momentum in the face of broader macroeconomic concerns, something tells me MGA will be quietly lamenting its missed chance as Mattel shareholders rejoice.