That's how one analyst would play the short term in car stocks -- and maybe the long term, too.

Swiss megabanker Credit Suisse just waded into the automotive market with a series of initiations on three of the most well-known car stocks in America. 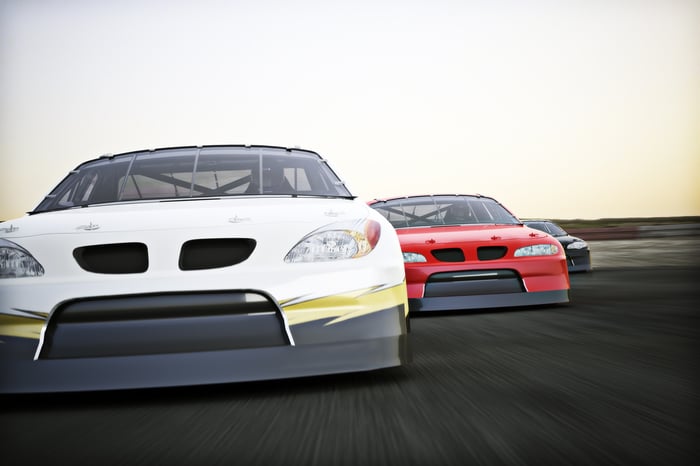 Why Ford gets a buy

Pondering the future of the car industry, Credit Suisse lifts a page from Ford's automotive playbook, in which that company measures its plans according to "Two Clocks" -- and uses it to weigh Ford stock itself. In the long term, says Credit Suisse, Ford is working to "reimagin[e]" its business to ensure it will have a future in a world going increasingly electric, and evolving toward driverless cars. But at the same time, in the short term, the company has to fix its problem of declining profitability.

Today's initiation of Ford stock at outperform (with a 12-month price target of $13) appears to focus on that short term.

According to Credit Suisse, there are "early signs of improvement" on profitability at Ford, and perhaps "more to come." Gross profit margin -- which has been falling for three years straight, according to data from S&P Global Market Intelligence -- ticked higher in Q1 2019. In fact, at 10.2%, Ford's gross margin was the highest we've seen since late 2017. Operating profit margin was up to 3.8% -- still not great, but the best it's been since early 2018. And Ford's net profit margin was 2.8% -- a nice reversal after the company's Q4 2018 net loss.

And GM does, too

General Motors also gets an outperform rating from Credit Suisse, this time with a $48 price target promising more than a 24% profit to new investors -- not quite as good as the 28% short-term upside Credit Suisse sees in Ford, but still nothing to sneeze at.

The difference in potential payoffs may be explained by the fact that, whereas Ford can become a better investment by fixing its problems in the near term, GM is already doing pretty well on the profitability front. Like Ford, GM enjoyed a bump in gross margin last quarter. GM's operating profit margin of 4.3% over the past 12 months is superior to Ford's, and with tax benefits, GM's net profit margin is currently at 6.2% -- more than twice what Ford is earning.

At the same time, it seems that Credit Suisse views GM as a better long-term bet than Ford. Indeed, according to the analyst, General Motors "is one of the best players in our coverage in balancing the 'near' and 'far,' offering a compelling narrative on both fronts."

But what about Tesla?

Not so with Tesla, though -- or at least, not according to Credit Suisse, which believes that in the long run, Tesla is doomed to end up as only "a niche automaker," hemmed in by bigger, better-capitalized rivals.

In a report covered today by TheFly.com, Credit Suisse highlights the threat to Tesla from one rival in particular -- Volkswagen -- which plans to unleash a torrent of 50 new battery-electric vehicles to compete with Tesla through 2025.

Although Tesla has taken an early lead in such "future" technologies as electric cars and autonomous driving, this "strong push" by VW, argues the analyst, is likely to swamp Tesla and deny the company the kind of scale it will need to compete with more mass market automakers -- and the ability to earn "healthy" profit margins as well.

And this last point may be key. Tesla may be enjoying a lot of popularity today, but as superinvestor Warren Buffett famously said, "In the short term, the market is a popularity contest; in the long term, it is a weighing machine" -- weighing profits, to be precise.

Tesla, which scored negative operating margins for seven straight quarters before becoming (briefly) profitable in last year's second half, turned unprofitable again last quarter. Analysts forecast the company to continue losing money in three of the next four quarters -- at the very moment its rivals ramp up their own electric offerings. Unless Tesla can beat the odds and deliver profits where none are expected, it may soon lack the money it needs to compete, and be relegated to the "niche" player role that Credit Suisse predicts for it.

This makes Tesla look like a much riskier bet than Ford, which costs only 13 times earnings, let alone GM, priced at just six times trailing profits. In the near term, both of these automotive giants look like better bets than Tesla -- and perhaps in the long term as well.