Things are heating up at Red Robin Gourmet Burgers (NASDAQ:RRGB). The struggling chain has had a rough streak of disappointing results, and in April, the company's CEO resigned. Now, hedge fund Vintage Capital has taken an activist position by accumulating a large ownership stake and advocating for a sale of the company. It has even thrown its own hat into the ring with a $40-per-share all-cash offer if no other buyers materialize. Red Robin stock closed June 12, the day before the Vintage Capital offer was announced, trading around $25 a share.

The stock jumped on the announcement, but Red Robin management quickly took a defensive position, which could cause a fight for board seats. Should shareholders embrace Vintage Capital's proposal, or is the company right to shun the activist? 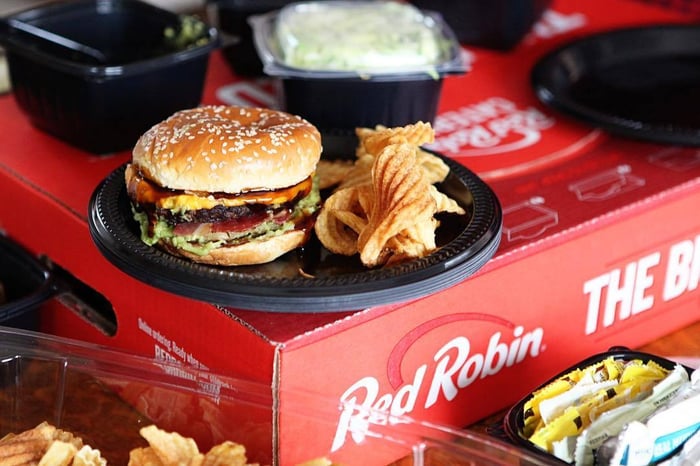 On June 13, Vintage published a letter to Red Robin's board of directors disclosing its 11.5% ownership stake in the company and calling for a sale of the company. The letter called Red Robin out for poor business performance and an alleged refusal to engage with the investment firm on its ideas to put the company back on track.

As indicated in Vintage Capital's letter, the hedge fund had privately made attempts to influence Red Robin's direction. After these private meetings, Red Robin's leadership hired takeover-defense advisors (investment bankers and lawyers) and adopted a "poison pill" in an attempt to thwart any hostile buyout attempts. A poison pill is a legal tool that allows a company to issue an unlimited number of shares to prevent a hostile acquirer from gaining control.

These perceived acts of bad faith by the company, in addition to its poor performance, ultimately caused Vintage Capital to rip up the script and go public with demands for change.

According to Vintage Capital's June 13 letter, the fund believes the No. 1 priority for the company should be to recruit a top-notch CEO. But because Red Robin has performed so poorly, Vintage doesn't believe it can attract a capable operator and has lost faith in the board's ability to recruit talent. Therefore, it says, the best path is to sell the company to a capable operator. Under private ownership, Vintage would be free to make the changes to the business it sees fit. Vintage Capital says it is even prepared to bid $40 per share in an auction for Red Robin. Vintage says if the board does not take steps to engage in a review of options including sale, it intends to call a shareholder meeting to attempt to force a new board into power.

In buying a large equity stake and threatening a hostile takeover, Vintage Capital has used extremely aggressive tactics. The company's defensive maneuvers have been equally contentious. This sets up a situation that could get ugly if it devolves into a fight for board seats.

The hedge fund presented a bleak picture of Red Robin's business and leadership in its letter. However, it sends a contradictory message: Vintage Capital wouldn't accumulate a large ownership stake or propose a buyout at a significant premium to the stock price if it didn't see significant upside.

Generally speaking, when an investment firm acquires a large stake in a company, it gets some ability to exercise influence over the leadership. But companies are more willing to partner with long-term shareholders, which Vintage Capital is not. It didn't start building its stake in Red Robin until April 2019.

Red Robin's stock trades at multiyear lows, and from the board's perspective, Vintage Capital's sudden entrance into the stock at a low level and its desire to see a quick pop through a sale could be perceived as opportunistic and short term. If Red Robin is suffering through a temporary lapse in performance, investors would want to wait for a recovery, especially if they purchased the stock within the last couple of years at a higher price. 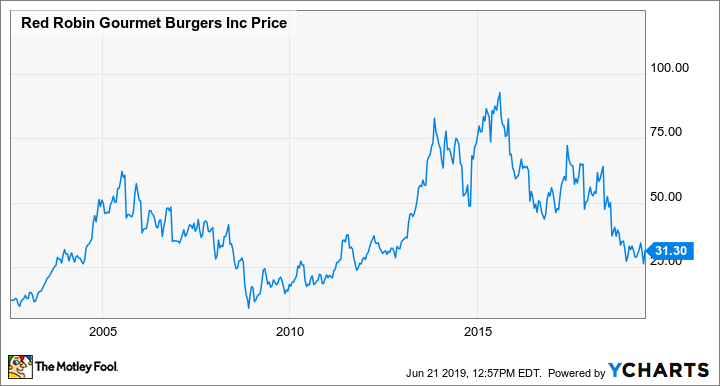 Perhaps adding to any Red Robin wariness about Vintage Capital is what happened when it tried to acquire Rent-A-Center (NASDAQ: RCII).

In a situation like the one at Red Robin, activist Engaged Capital took a stake in Rent-A-Center and forced it into a sales process. Vintage Capital tagged along, establishing a position in Rent-A-Center's stock, and then proceeded to strike a deal to acquire the entire company.

The original deal inked in June 2018 was for Vintage Capital to acquire Rent-A-Center for $15 per share. But in December 2018, Rent-A-Center pulled out. Vintage sued the company, but Rent-A-Center's position was upheld and the two sides reached a settlement.

Although Rent-A-Center didn't spell out why it pulled out of the deal, the company's shareholders are better off for it. The stock now trades more than 50% higher than the price Vintage Capital offered to buy it for. Vintage Capital was trying to be opportunistic and its deal would not have been a good one for shareholders. Applying similar logic to Red Robin would indicate that shareholders should be hesitant to accept a buyout offer from Vintage Capital.

There is merit in resisting Vintage Capital

Red Robin's board of directors has been put into a tough position. The company's financial performance and stock price have been lackluster, and the chain is missing a permanent CEO. This has made Red Robin vulnerable to an activist assault.

It's possible that shareholders would be better offer if Red Robin is sold at a fair price, but it's hard to swallow that message from an activist hedge fund that only recently became involved with the company.

This all suggests that Red Robin's board has a good reason to resist the hostile takeover attempt, but it doesn't mean the board shouldn't listen to the investment firm and try to find a way to partner constructively. Unfortunately, there is a good chance that the situation devolves into a fight over board seats, and a corporate proxy fight would only distract from efforts to turn the business around.