An administrative error regarding mailing labels will delay the $100 billion spin-off.

I recently wrote about Naspers (NPSNY -0.85%) and the upcoming spin-off of its international internet assets. These assets mainly include a massive 31% stake in Chinese internet giant Tencent (TCEHY -0.08%), as well as roughly 20 other smaller internet start-ups in emerging markets. Naspers first announced its intention to list the internet assets on Euronext back in March, then gave more particulars around the new company and schedule of events in late May.

Those plans were recently abruptly delayed, as Naspers announced it was pushing back both its general meeting of stockholders as well as the date of the potential spin-off.

The company also revealed that the new listing, formerly referred to as "NewCo," will now be called "Prosus," a Latin word that has multiple meanings but in this case translates to "forwards."

Naming issues aside, is the Prosus spin-off postponement any reason for concern, or just a frustrating delay that's still likely to unlock the same value, just two month later? 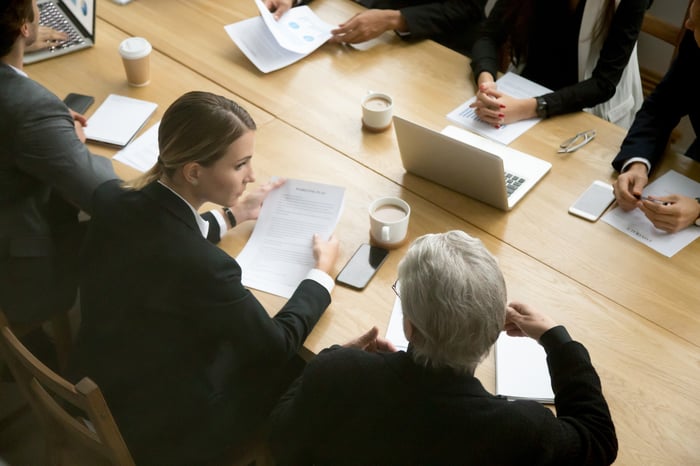 The good news for Naspers shareholders is that the delay doesn't seem to have anything to do with the merits or mechanics of the spin-off. The culprit actually appears to be a minor mistake on the part of a third-party company that was responsible for mailing the general circular to Naspers investors ahead of its general meeting. That's right -- a $100 billion-plus transaction is being held up because of a minor snafu with mail labels. According to the press release:

An administrative error by an external service provider has resulted in certain of the copies of the circular delivered to shareholders being incorrectly labelled. The service provider concerned has advised Naspers that the error occurred in pairing the names and addresses of some shareholders for purposes of printing labels on the envelopes in which the physical copies of the circular were delivered to certain shareholders. This meant that some circulars were sent to the correct addresses of the affected shareholders, but that incorrect names appeared on these envelopes (i.e. the name and address did not match). This could in some cases lead to confusion.

It's good that Naspers is playing more safe than sorry for its shareholders, although it is a pretty safe bet that shareholders will vote in favor of the move regardless. The spin-off is designed to close the valuation gap between the company's share price and its Tencent stake, an annoyance that shareholders have long sought to rectify. That makes this rather minor mistake frustrating for shareholders who were hoping to receive their new Prosus shares or American Depositary Receipts sooner.

The general meeting will be moved from June 28 to Aug. 23, and the listing of Prosus will now take place some time in September, as opposed to July 23 -- a delay of about two months.

If you were already a Naspers shareholder, I would continue to hold the shares, as the revised timeline doesn't affect the intrinsic value of Naspers' existing assets. Remember, not only is Naspers still trading at roughly a 30% discount to its Tencent stake alone, but Prosus will also contain some 20 other internet companies.

Although the value of Prosus will largely be determined by the value of Tencent in the near term, which will be mostly affected by the health of Chinese consumers, there are other significant assets in Prosus across online classifieds, food delivery, fintech, and social media in many emerging markets.

In its recent earnings release, Naspers revealed a strong 29% overall revenue growth last quarter, along with better profitability across its businesses, including PayU, Naspers' wholly owned payment processing platform. Other positives included "significantly reduced" losses in its e-commerce operations and the revelation of "larger ambitions" in food delivery. Perhaps most interestingly, Naspers reminded shareholders that its non-Tencent assets have compounded at a 20% internal rate of return since 2008, meaning the firm isn't just a one-trick pony.

The bottom line is that nothing has fundamentally gone awry with Naspers, and its spin-off is looking as interesting as ever, with even more time for investors to buy in ahead of the September Prosus listing on Euronext.