The company wants to double its Asia Pacific revenue over five years.

When it comes to online dating, Match Group (MTCH) has no equal. The company owns a growing collection of dating apps that span the globe, including Match, Tinder, OkCupid, PlentyOfFish, and Hinge, as well as dozens of others.

But make no mistake: Tinder is the biggest contributor to the company's growth and financial success. Tinder subscribers increased by 384,000 during the first quarter, growing its rolls to a whopping 4.7 million, up more than 1.3 million and 36% year over year. However, as Tinder's soaring subscriber growth has begun to diminish in the U.S., Match is looking to Asia to spur the next stage of its growth. 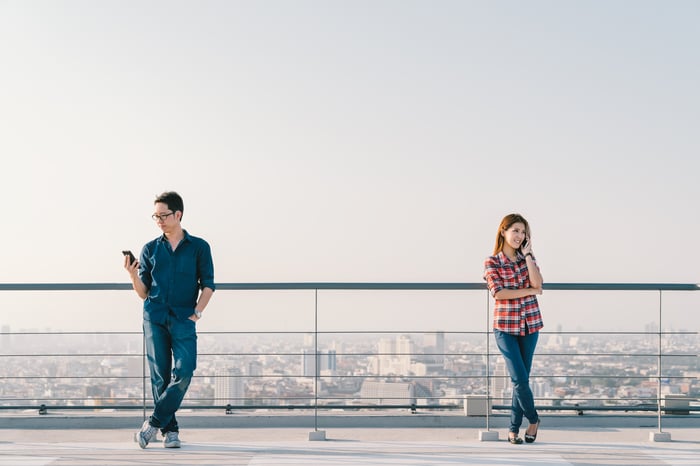 (Holding) hands across the water

Match recently announced that the company had realigned its management team to focus on opportunities in the Asia Pacific region. In fact, Asia was mentioned 31 times during the company's first-quarter conference call.

In recent months, Match has seen success in India, not only by promoting Tinder but also by billing OKCupid as a complementary alternative. That strategy is paying off, as downloads of OKCupid grew 600% year over year in the first quarter, becoming one of the top dating apps in the country with minimal investment.

Match CEO Mandy Ginsberg said the company will leverage that successful template in its approach to other Asian markets. Tinder is still the breadwinner, however, as it's one of the top 10 grossing apps across six countries in Southeast Asia.

Another strategy the company is employing is to address the issue of mobile data usage, which still comes at a premium in some countries. Match developed an alternate version of its most popular product, dubbed Tinder Lite, which is smaller, easier to download, and less data-intensive than the full-fledged version.

Investors may recall that it took some time before Match attempted to monetize Tinder. One of the first big steps the company took on that journey was the introduction of Tinder Gold, the dating app's premium subscription tier that lets users see who has liked them -- without all the swiping. The company continues to roll out new premium features that it believes will give users more reasons to use Tinder and to use it more often. These upgrades were big moneymakers -- Tinder's revenue topped $800 million last year.

Match also recently embarked on a comprehensive evaluation of the company's global pricing strategy. Match plans to begin testing price elasticity on a market-by-market basis as Ginsberg believes there's an opportunity to increase the prices, particularly in areas with the highest per-capita income.

A large and growing opportunity

That's not to say there aren't challenges ahead. Online dating has been growing in popularity in the U.S., and the market is expected to be worth as much as $3.2 billion by 2020, according to MarketResearch.com. That's not necessarily the case in many other countries where online dating still carries a negative stigma.

The headway Match has made thus far has been encouraging, and management believes that overall revenue from Asia, which accounted for less than 12% of the total in 2018, can grow to as much as 25% over the coming five years.

3 Great Stocks You Can Buy and Hold Forever
397%