While burger chains including Burger King, Carl's Jr., and Red Robin Gourmet Burgers (NASDAQ: RRGB) have been grabbing headlines for serving faux meat patties from Beyond Meat (NASDAQ: BYND) and rival Impossible Burger, McDonald's recently announced that after it switched over to fresh beef (rather than frozen) in Quarter Pounders a year ago, customers bought 40 million more of the iconic sandwich in the first quarter this year than they did in the same quarter a year ago. It also said it gained "burger share" in the informal eating out category for the first time in five years.

Certainly there are customers who will want to eat burgers made from pea protein isolate or soybeans due to being vegetarian or vegan or to being concerned about animal and environmental issues, but this news from McDonald's shows that there are still millions of people who prefer eating real beef. 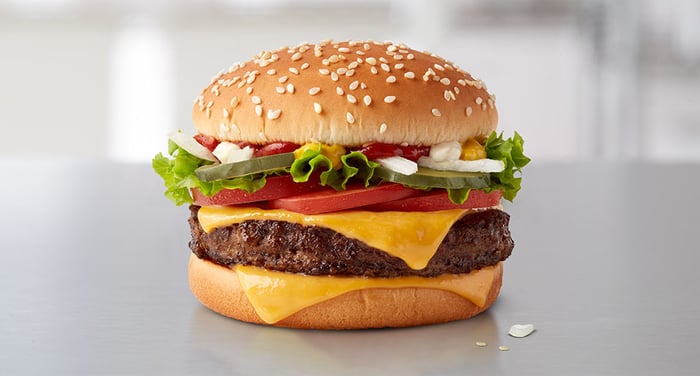 A focus on freshness

Transitioning to fresh beef was not an easy undertaking for the fast-food chain. There are more than 14,000 McDonald's restaurants in the U.S. operated by some 3,000 franchisees, so seamlessly making the switch without any interruptions in its supply chain was a major achievement.

McDonald's said that to accommodate the fresh beef, it was required to introduce specially designed packaging, develop dedicated kitchen utensils, add new refrigerators, and change the method of cooking the burgers, because the needed internal temperature for the fresh patties is higher than it is for frozen ones.

As part of McDonald's overall attempt to improve the quality of its food to appeal to consumers who are taking a more active interest in their health, the restaurant also has been streamlining its menu, recently removing eight items and it said customer feedback led it to eliminate its Signature Crafted sandwiches.

While the switch from frozen to fresh beef was limited mainly to the Quarter Pounder burger, its success may very well have McDonald's expanding its usage to other sandwiches. And it might want to do that soon, because rival Wendy's (NASDAQ: WEN) is the leader in the fast-food space, often boasting that all of its burgers are made from fresh beef while also taking mocking McDonald's frozen beef patties to an artistic level.

A stampede for real beef

But McDonald's might be the one laughing now. It said sales of Quarter Pounders surged 50% in the first month after it made the switch in May 2018 and maintained strong sales across the last 12 months, averaging 30% increases.

What the fresh-beef burger couldn't do, however, was bring more customers into the restaurant. McDonald's said guest traffic was down during the quarter, with the comps increases coming as a result of higher average guest checks from either buying more when customers were in the store or paying higher prices.

McDonald's is working to reverse that trend by investing in more technology to speed up service, reduce order errors, and improve the overall guest experience.

It wouldn't be surprising to see McDonald's eventually introduce a meatless burger to its U.S. menu. Nestle (NASDAQOTH: NSRGY) launched a plant-based patty in Europe earlier this year, and McDonald's is giving it a try at its restaurants in Germany. Nestle plans on bringing the burger to the U.S. sometime this year, so having it show up at McDonald's in the U.S. might be possible.

Although there's nothing wrong with trying to meet the needs of all potential customers, McDonald's experience with introducing fresh, real beef should convince it and other burger chains that the path to sustained growth will be found in cow pastures, not among the pea or soybean fields.