In the wake of the company's January satellite mishap and subsequent massive earnings miss, Maxar stock plumbed depths as low as $5 per share (that's penny-stock levels, people) in March. It's been clawing its way back since, helped by a series of positive news items, including the announcement of a $375 million lifeline from NASA.

What really got the stock rolling, though, was last week's news that European space companies Leonardo SpA and Thales SA may be interested in buying Maxar's space business, MDA, for as much as $1 billion.

On Tuesday, this news helped lift Maxar stock another 17%, to close above $9 per share for the first time since January. On Friday, as the news spread even farther, Maxar gained a further 7.9% -- and it sits within spitting distance of double digits today.

But is the rumor true? 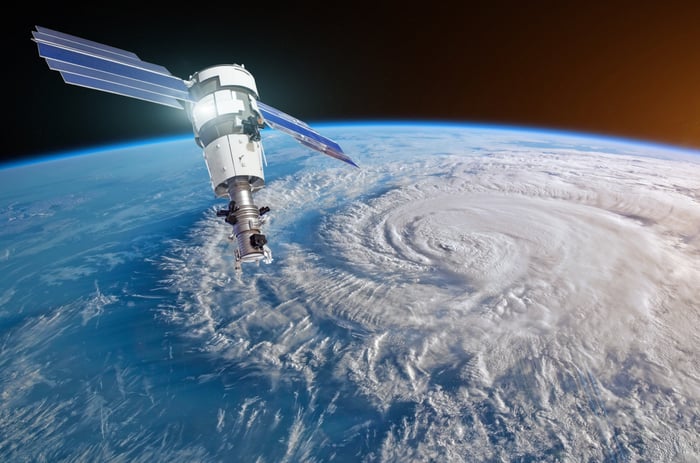 As Reuters reported last week, Leonardo CEO Alessandro Profumo has confirmed that his company and Thales are at least "considering" buying Maxar's space systems business, which builds everything from robotic devices used in space, to satellite payloads and communication systems, to entire satellites.

That being said, "considering" isn't the same thing as "intending." And the "$1 billion" valuation quoted by Reuters was sourced only from "people familiar with the matter." The bid price -- if a bid actually materializes -- has not been confirmed by either Leonardo or Thales.

Nor does Leonardo appear to be a particularly motivated buyer, willing to pay any price named to acquire MDA. To the contrary, if Leonardo decides not to buy, it could still get what it needs as "a customer of Maxar and MDA." Actually buying the company, said Leonardo's CEO, "is not something that is necessary to complete for our business."

Especially not for $1 billion.

After all, Maxar Technologies is currently valued at less than $600 million in market capitalization. A $1 billion buyout price would represent a 67% premium to Maxar's current price. Even in a market where overvalued acquisitions aren't exactly a rarity, that kind of premium would seem kind of extreme -- the more so when you consider what Leonardo and Thales would get for their money.

Consider: According to S&P Global Market Intelligence data, "space systems" account for only a little more than half of Maxar's $2.1 billion in total annual revenue ($1.1 billion, to be precise) -- and provide a much smaller percentage of the company's profit. In terms of earnings before interest, taxes, depreciation, and amortization, for example, S&P Global shows MDA contributing just $5 million out of Maxar's $472 million total EBITDA last year. That works out to an EBITDA margin of less than 0.5% -- versus Maxar's overall EBITDA margin of 22%.

Does it make sense that Leonardo and Thales would pay more than all of Maxar stock is currently worth, to acquire the least profitable division within Maxar? It doesn't to me.

But what if it's true?

That being said, if Leonardo and Thales are in fact contemplating spending $1 billion to acquire MDA...well, suffice it to say that Maxar shareholders should probably jump at the chance to approve such a deal.

Such a transaction would provide a cash windfall with which to help pay down Maxar's $3.3 billion in long-term debt. And Maxar would only be giving up $5 million of annual EBITDA in the bargain, leaving the company's imagery and satellite services businesses (basically, the parts Maxar acquired through its purchase of DigitalGlobe two years ago) intact to continue generating cash.

Granted, even assuming all of the MDA purchase price was earmarked for paying down debt, this still might not be enough to save the company. After all, Maxar would still be carrying more than $2 billion in debt net of cash, and still operating somewhat hobbled by the loss of its WorldView-4 imaging satellite earlier this year. But it still looks to me like the best chance Maxar has of getting back to profitability in space.