Born out of the ashes of the Soviet Union's state telephone network in 1992, the company branded itself "VimpelCom" in an attempt to make itself sound modern, Western, and reliable to Russian consumers (who at the time, believe it or not, liked the West). The company furthered the impression with its choice of brand name, the most un-Russian-sounding "Beeline," helping to secure for it a position among the leading cellphone providers within the new Russian Federation. Currently, Veon sits at No. 3 by revenue, according to data from S&P Global Market Intelligence.

In 2010, VimpelCom announced it was moving its headquarters to Holland. Then in 2017, the company changed its name to the less familiar "Veon." Combined with a steep slide in sales -- revenue is down 33% over the past five years -- I suspect these moves helped to push Veon off the radar for many investors. And yet, all may not be lost. 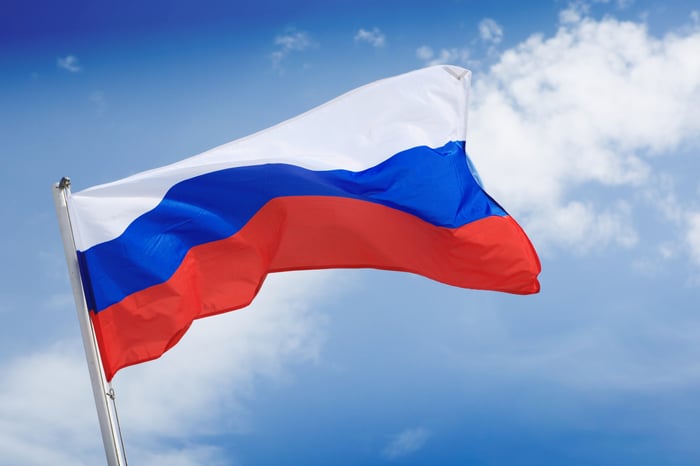 TheFly.com has the details. This morning, Merrill Lynch announced it is upgrading shares of Veon from neutral to buy and raising its price target by 40% to $3.80. Merrill cited three main reasons for the move.

First, the analyst says it sees signs of operational stabilization in Russia, which despite all the corporate maneuverings, still provides more than 50% of Veon's revenue and profits. Although revenue remains down steeply from 2013 levels, 2018 sales were only off about 1.5% in comparison to 2017.

Second, the dividend: Veon pays its shareholders a whopping 9.3% dividend yield, according to S&P Global data, which is significantly more than telecom investors in AT&T or Verizon enjoy. And Merrill thinks a 10% yield is not out of reach.

Indeed, with Veon's dividend payout ratio at only 43%, less than half the company's profits are currently earmarked for dividend checks. This suggests that not only is its dividend safe, but that the company could even increase it over time.

Third and finally, the liquidation of Telenor's stake in Veon, which may have contributed to Veon's stock underperformance over the past year, is nearing an end. Once Telenor's 8.9% stake has been sold, selling pressure should lessen, permitting the stock to resume its rise.

All of this adds up, in Merrill Lynch's view, to the conclusion that now is an excellent time to pile back into Veon shares.

Of course, even taking all of the above as a given (and I'm not 100% certain you can do that, seeing as Russian revenue is still going down, albeit not as steeply as it once was), there remains the question of price. Simply put: Is Veon stock attractively valued?

At first glance, the answer appears to be an unqualified "yes." Valued at only $5.4 billion in market capitalization, and with $1.2 billion in trailing-12-month earnings, Veon shares sell for a P/E ratio of only 4.5. Even assuming no growth at all, that's an attractive price given the stock's 9% to 10% dividend yield. However, there are complications.

First and foremost: Debt. Veon has a boatload of it -- $8.1 billion net of cash on hand. Added to the company's market cap, this gives it an enterprise value of roughly $13.5 billion, making its debt-adjusted P/E ratio something more like 11.2.

Now personally, I think even that valuation is pretty attractive given the dividend yield. Adding to the attraction, though, is the fact that while Veon's earnings estimates are all over the map, analysts believe that the company's free cash flow is likely to grow strongly over the next several years -- rising 33% this year from last year's $567 million, dipping ever so slightly in 2020, but then surging to $1.1 billion in 2021, $1.2 billion in 2022, and $1.5 billion in 2023.

What could really turbocharge the stock, though, is what Veon might do with all this extra cash coming down the pike.

Dividend increases are one option, of course. But if Veon were to take some of this cash and begin paying down its debt, the company's enterprise value would rapidly shrink, and the stock would look increasingly cheap to investors. Even with a steady-state dividend yield in the high single digits, I believe that's the best scenario for how Veon stock could turn into a winning investment -- and prove Merrill Lynch right for recommending it.