Please ensure Javascript is enabled for purposes of website accessibility
Free Article Join Over 1 Million Premium Members And Get More In-Depth Stock Guidance and Research
By George Budwell, Keith Speights, and Todd Campbell - Jul 10, 2019 at 11:01AM

Marijuana investors might want to keep an eye on these three pot stocks in July.

After a red-hot start to the year, marijuana stocks have been steadily retreating over the past two months. Weaker-than-expected earnings from some of the top players and over-the-top valuations have taken a hefty toll on the industry of late.

With valuations rapidly falling across the board, we asked three of our Motley Fool contributors which stocks they think marijuana investors should be keeping close tabs on right now. They suggested Aleafia Health ( ALEAF 1.74% ), Charlotte's Web Holdings ( CWBHF -2.80% ), and Canopy Growth ( CGC -3.16% ). Here's why. 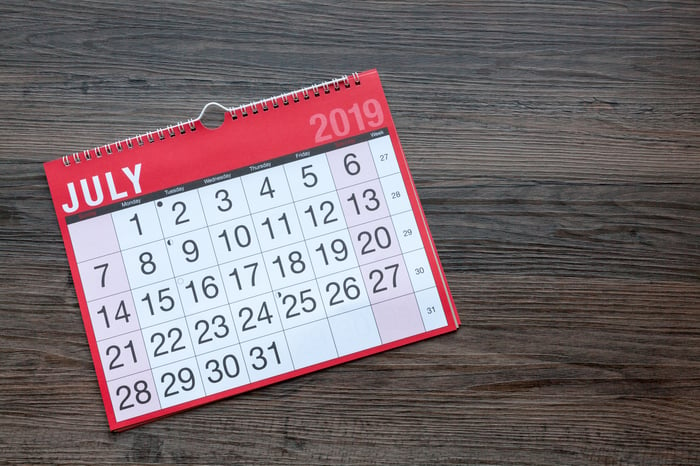 Don't sleep on this underdog

George Budwell (Aleafia Health): Canada's Aleafia Health is angling to become a top-drawer pot stock. Despite the company's late start, Aleafia has made a number of intriguing moves over the past year that have transformed formed it from a long shot into a formidable upstart in the world of Canadian cannabis companies.

What's the backstory? Last March, Aleafia acquired Emblem, which instantly made it a top-10 Canadian cultivator, expanded its product offerings, and cemented its place as the country's largest medical service provider for cannabis. Ahead of this Emblem transaction, Aleafia also bought a 10% stake in the licensed Australian medical cannabis company CannaPacific and formed a joint venture with Acnos Pharma GmbH to gain a foothold in the high-value German cannabis market. Aleafia thus has a clear path carved out to possibly catch up to its larger peers and maybe even surpass a few of the current alpha dogs from a business development standpoint.

All that being said, Aleafia is still facing an uphill battle to survive the ongoing consolidation phase in this nascent industry. The Canadian cannabis market, after all, is already oversaturated with cultivators and big-money partners have largely been sticking to the sidelines recently. Aleafia's large medical service network, in turn, will more than likely have to carry it through this rather challenging period.

Should investors take a flier on this high-risk pot stock? Although Aleafia's market cap pales in comparison to the top dogs in the space, investors might want to think twice before buying shares. Aleafia has accomplished a lot with its limited resources, but there's no guarantee this tiny company can ultimately survive. As a result, this small-cap pot stock is arguably best suited as a top watch list candidate for the time being.

For one thing, Charlotte's Web's revenue will almost certainly continue to skyrocket. The company planted 300 acres of hemp last year. It announced a few weeks ago that total will increase to 862 acres in 2019. Even better, Charlotte's Web shouldn't have to worry about customers for its hemp CBD products. In the first quarter, 2,300 new retail locations were added to its distribution network -- more stores than were added in all of 2018. This brings the total number of retail stores carrying Charlotte's Web products to more than 6,000.

The key factor behind Charlotte's Web explosive growth is the legalization of hemp in the U.S. in December 2018. There are still some wrinkles to iron out with this legalization, though. The U.S. Food and Drug Administration (FDA) conducted a public hearing in late May as part of a process to establish regulations for CBD products. My hunch is that when those regulations are finally put into place, they'll provide a framework for fueling even more growth for Charlotte's Web.

I'm also interested to see what new steps CEO Deanie Elsner might take over the next few months. She's a consumer packaged goods industry veteran with a strong track record.

Overall, there are plenty of reasons to like what's happening with Charlotte's Web. I think the stock's rebound is just getting started.

Todd Campbell (Canopy Growth): Marijuana market pioneer Bruce Linton is out. After establishing Canopy Growth as the leading player in this multibillion emerging market opportunity, its board has apparently decided it needs a fresh set of eyes to take it to the next level.

The decision surprised everyone. A highly respected cannabis evangelist, Linton helped validate the legal marijuana market worldwide. Canopy Growth became the largest legal marijuana company in the world, secured $4 billion in financing via an equity sale to beer, wine, and spirits giant Constellation Brands ( STZ -0.72% ), and announced plans to take advantage of growing marijuana momentum in the U.S. under his leadership.

Those are impressive accomplishments. But entrepreneurs like Linton often possess a management style that doesn't jibe well with investors once a company gets beyond its fledgling state. Linton's "foot-on-the-gas" mentality was critical to Canopy Growth's early success, but someone with more experience running a larger consumer goods business might be better suited to taking on the next stage of Canopy's growth: tackling complex global markets while also delivering operating profits.

In short, Linton's surprising departure might be for the best, especially since Canopy Growth's likely to attract top CEO talent because of its market leadership. If Canopy Growth lands a CEO with a proven track record of global success, then buying Canopy Growth shares following their post-Linton sell-off could be wise. After all, it's disrupting a global market worth over $150 billion, and with so much money up for grabs, there's plenty of potential for management to reward investors.