The bottom line slumped as promotions and currency took their toll, and the denim company sees weaker growth in the second half.

Levi Strauss ( LEVI 1.15% ) impressed investors when it reported its first-quarter results back in April, but the denim company was unable to provide an encore performance. Levi's second-quarter results fell far short of analyst expectations, missing on both the top and bottom lines. Even on an adjusted basis, which backs out costs related to the IPO, net income tumbled.

On top of the weaker-than-expected results, Levi predicted that sales would moderate in the second half of the year due to a few different factors. The market wasn't thrilled with any of this news, sending the stock down around 12% soon after the opening bell on Wednesday. 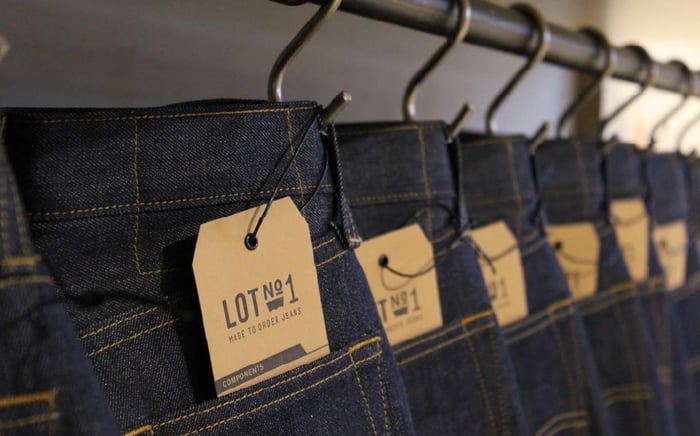 Growth, but not enough

Levi reported second-quarter revenue of $1.31 billion, up 5% year over year but $120 million below the average analyst estimate. Currency was a big problem during the quarter, reducing Levi's growth rate by 4 percentage points. International markets accounted for 58% of total revenue.

Global wholesale revenue jumped 6%, while direct-to-consumer revenue soared 14%. Levi has been rapidly opening its own retail stores, with the company's store base expanding by 78 over the past year. As of Nov. 25, 2018, Levi operated 824 stores and about 500 shop-in-shops worldwide.

A weak spot for Levi was the U.S. wholesale business. While total U.S. revenue was up 1%, U.S. wholesale revenue declined by 2%. The company blamed retailer bankruptcies, store closings, and a decline in discounted sales to the off-price channel.

"[A]bout two-thirds was what I call a combination of bankruptcies, store closures and a softer environment. About one-third was the fact that we reduced our discounted sales or incentive sales," explained Levi CFO Harmit Singh during the earnings call regarding the weakness in U.S. wholesale, according to a transcript from Seeking Alpha.

Levi reported net income of just $28.2 million, or $0.07 per share, under generally accepted accounting principles. That's down from $74.9 million, or $0.19 per share, in the prior-year period, and $0.31 per share below the average analyst estimate.

Much of this decline was due to costs related to the initial public offering. The company booked $29 million of one-time costs, including $25 million of underwriting commissions paid on behalf of selling shareholders.

Even after backing out those costs, Levi reported a decline in non-GAAP (adjusted) net income. Adjusted net income came in at $69 million, down about 17% year over year. The company blamed part of this decline on lower net gains on foreign exchange derivatives. Adjusted earnings before interest and taxes slumped 4% to $82 million, driven by unfavorable currency and higher spending on advertising.

While Levi expects to grow revenue for the full year at the high end of its guidance range, which calls for mid-single-digit percentage growth, the company sees a weaker second half ahead. "While underlying business trends remain positive, there are a few reasons we expect second-half sales growth to moderate relative to the first half, particularly in the United States," said Singh.

When Levi went public earlier this year, investors were optimistic despite the company's long history of sluggish revenue growth and erratic profitability. The market assigned the stock a price-to-earnings ratio of 20, based on 2018 earnings and excluding a one-time tax change. That's not all that high, but it does bake in the expectation of solid earnings growth.

With adjusted earnings slumping in the second quarter, and with various headwinds negatively affecting sales in the second half, Levi's growth story doesn't seem as strong as it did a few months ago.