That momentum carried over into the first quarter of 2019 for Levi. Revenue was up by a double-digit percentage on a constant-currency basis, and adjusted operating income grew at an even quicker pace. The company's guidance for the full year was a little less impressive, but Levi still sees revenue and earnings marching higher in 2019. 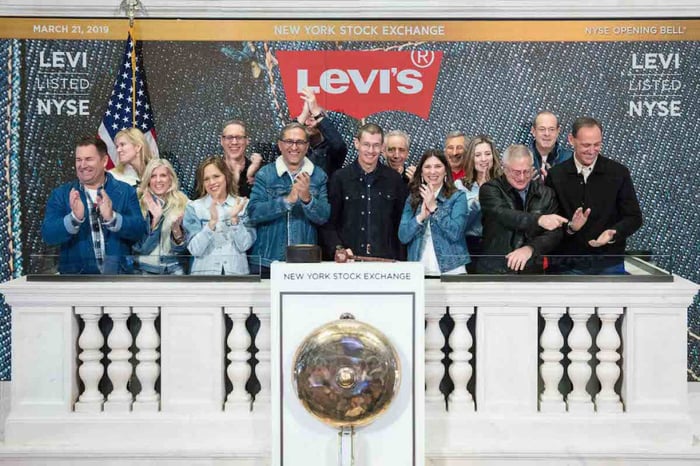 With about half of Levi's revenue coming from Europe and Asia, currency fluctuations reduced the company's revenue growth rate during the first quarter. On a constant-currency basis, revenue was up 11% year over year, while adjusted operating income was up 21%. Here are the company's as-reported results:

Levi's adjusted operating income growth was driven by higher revenue and a reduction in operating expenses as a percentage of revenue. However, adjusted net income soared primarily due to a $37 million charge related to undistributed foreign earnings in the prior-year period.

The timing of the end of fiscal 2019 will reduce revenue growth a bit. Fiscal 2019 won't contain Black Friday this year, which Levi's expects to reduce revenue by about half of a percentage point. Adjusted operating margin is expected to be flat to slightly up this year.

Levi's strategy is to branch out beyond its core men's bottoms business by increasing sales of tops and women's apparel. That plan is working so far, but the company's track record over the past 20 years should give investors some pause. Levi's annual revenue is still well below its peak revenue in the mid-1990s, and the apparel business is arguably more competitive today than it's ever been. Throw in disruption from e-commerce, and the path ahead for Levi is far from smooth.

Levi did what it needed to do for its first quarterly report as a publicly traded company. Whether it can keep up its momentum in the coming years, rather than fall back into a malaise, remains to be seen.