If you're an income investor, deciding between an investment in Kinder Morgan Canada (OTC:KMLGF) and Chevron (NYSE:CVX) today might seem easy. The first pays a dividend that's currently yielding 5.6%, easily beating the 3.8% yield of the second.

But dividend yield shouldn't be the only factor you consider when looking at these two energy stocks. To decide which one is better for your portfolio, it's necessary to step back and look at the bigger picture. In particular, let's compare them across these five areas.

Kinder Morgan Canada is a $1 billion market cap energy company that owns just three assets in Canada -- all in the midstream space. To be fair, $48 billion market cap Kinder Morgan, one of the largest and most diversified midstream companies in North America, owns 70% of it, and that relationship should help it to punch above its weight and compete with larger players. But Kinder Morgan Canada is still a relatively small, narrowly focused energy company. 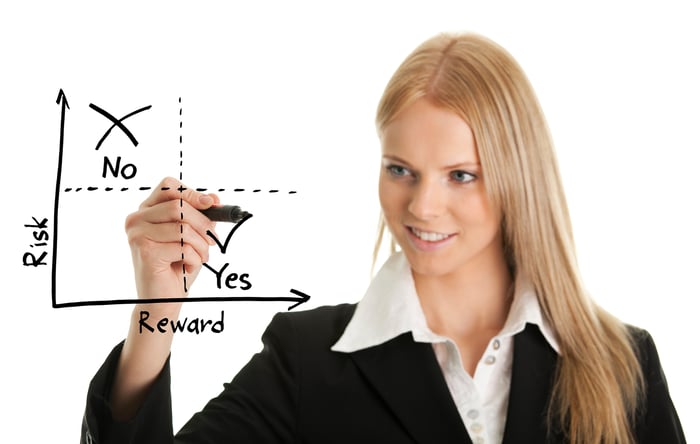 Chevron, by contrast, is a $230 billion market cap energy giant with assets across the upstream oil and gas drilling, midstream, and downstream chemicals and refining sectors. Not only is it larger and more diversified, but its portfolio quite literally spans the globe. When it comes to scale and diversification, Chevron is the clear winner.

Kinder Morgan Canada has been a public company since May 2017, when it was spun off from Kinder Morgan. It has paid a consistent dividend since that point, with a total of eight payments under its belt. (The first payout was smaller because it was for only part of a quarter.)

Chevron has been in existence since 1879. Not only has it paid dividends for most of this span, but it has increased the payouts shareholders have received annually for 32 consecutive years. Just being around longer doesn't make Chevron a better company than Kinder Morgan Canada. However, its impressive dividend streak speaks volumes about how well run Chevron is, and its philosophy on sharing its success with investors. Again, Chevron, despite a lower yield, looks like the winner by this measure.

Things get a little more interesting when you look at the balance sheets. Chevron's debt-to-equity ratio is around 0.20, toward the low end of its peer group. It has plenty of room to add debt should it need cash to fund its business and dividend, as it did during 2014's deep oil price downturn. Looking at leverage a different way, the energy giant's debt-to-EBITDA ratio is a reasonable 0.9 times. And it covered its trailing interest expenses by an incredible 24 times. There is no reason to worry about Chevron's financial strength. 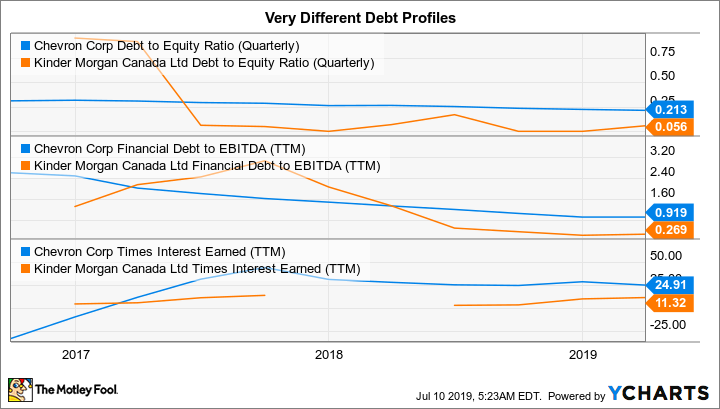 Yet Kinder Morgan Canada's financial foundation is even stronger. The tiny midstream player's debt-to-equity ratio is just 0.05, its debt-to-EBITDA ratio is 0.26, and it covers its trailing interest expenses 11 times over (a lower, but still solid number). This, however, needs some explanation.

Kinder Morgan Canada just completed a strategic review of its business following the sale of the project was expected to be its main growth engine. Based on that review, it determined that it will remain a standalone company. Right now, it is investing in its three primary assets, which are expected to provide some near-term growth. But it really needs to either build new assets or buy some if it wants to expand over the long term.

There's no plan on the table for that right now, but it is highly likely that it will finance this growth at least partially with debt. With such a clean balance sheet, it has plenty of financial flexibility, but over time, its growth efforts will likely lead to much higher levels of leverage.

Chevron's outlook is a bit less hazy. Of course, there's no way to predict with certainty what will happen in a year or two from now, but the oil giant plans to spend around $20 billion a year through 2023 to expand its production and fortify its downstream operations. Its intentions have been well articulated, as well, with a projection for mid-single-digit percentage production growth between 2018 and 2023. Investors know pretty much what they are getting when they invest in Chevron, and so far its plans have been playing out as expected. That's another win for the energy giant.

Chevron has rewarded investors well over the years with a steadily increasing dividend payment backed by a diversified and financially strong business. However, the largest contributors to its top and bottom lines are oil and natural gas. These commodities often experience volatile price swings, so Chevron's revenues and earnings can be a little unpredictable, even though it has the balance sheet to handle such variability. Its downstream operations help to provide some underlying revenue stability, but oil and natural gas are (and will likely always be) the driving force for this company. That means huge earnings when prices are high, and lots of red ink when prices tank. 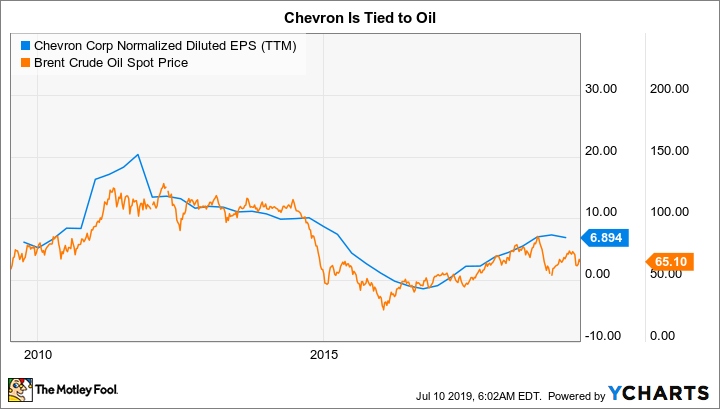 Kinder Morgan Canada operates only in the midstream space. This area of the energy sector is largely driven by fees, meaning that demand for energy is more important to its bottom line than the price of energy. So long as someone wants to use its systems to ship and store oil and related petroleum products, Kinder Morgan Canada's revenues and earnings will remain robust even if crude prices are low. It is, like most midstream companies, a fairly consistent business. That's why Kinder Morgan Canada wins on this front, though with the caveat that Chevron has proven over time that it is built to handle energy price volatility.

Chevron got the nod on three of the five items examined, and the two points on which Kinder Morgan Canada came out stronger (leverage and consistency) weren't exactly strong wins for it. So when you add it all up, between these two, most investors will likely be better off buying shares of Chevron, a large and diversified energy giant with an impressive financial foundation that has clear plans and a proven history of rewarding investors. Sure, its dividend yield isn't as high, but a somewhat lower yield is a worthwhile trade-off for all the other benefits you are getting when you buy Chevron.