A high-yield dividend stock doesn't always have to translate into an exceptionally risky stock on shaky financial ground. There are often some very good reasons that a stock with a yield over 5% can be a good opportunity for investors.

This happens to be the case with AT&T (NYSE:T), Royal Dutch Shell (NYSE:RDS.A)(NYSE:RDS.B), and Altria Group (NYSE:MO), all of which sport high dividend yields but don't represent the kind of risks you'd typically associate with such stocks. Read on to find out why three Motley Fool contributors picked out these three particular stocks. 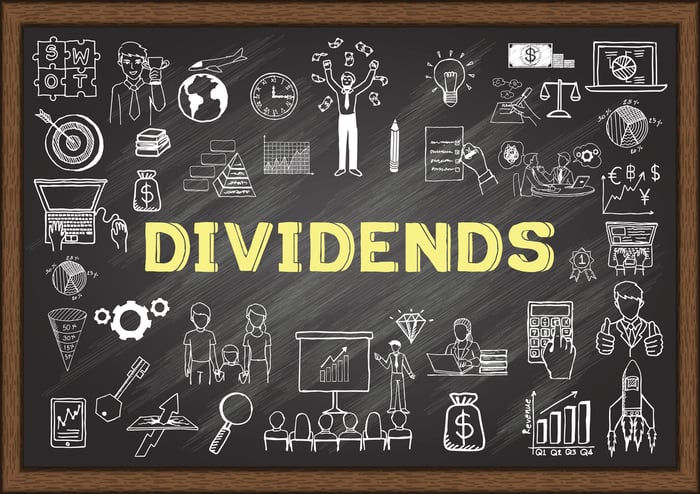 Jamal Carnette, CFA (AT&T): AT&T is the poster child for high-yield blue chips, but not for good reason: Shares have been stuck in neutral over the last five years, down 6% in the time frame versus a 53% advance for the S&P 500. Still, banning an unforeseen negative event, income investors can expect the dividend to continue.

The bearish argument is AT&T has too much debt. While it's certainly true that AT&T has significant debt on its books -- nearly $200 billion, including commercial paper, capital leases, and traditional bonds -- leverage doesn't exist in a vacuum. AT&T used much of that money to buy DIRECTV and Time Warner, both cash-accretive acquisitions.

AT&T has a revenue catalyst in the upcoming switch to 5G. Despite the fourth generation of wireless internet connectivity (4G) being considered a bust for the major wireless telecoms, analysts are broadly more bullish on this fifth iteration because it's able to facilitate many more connections and usher in the Internet of Things.

In the short term, AT&T is committed to paying down its debt pile. In the first-quarter conference call, CFO John Stephens noted $12 billion in free cash flow (after paying dividends) and over $6 billion in asset sales will be used to reduce its debt. Debt pay-downs and the upcoming 5G catalyst are reasons for income investors to put AT&T on their radar.

No longer top dog, but still worth buying

John Bromels (Royal Dutch Shell): Recently, oil major Royal Dutch Shell lost one of its crowns. For a year, the company had been the highest-yielding dividend stock among big oil companies. But in the past few months, shares of BP have slumped while Shell's held steady, which was just enough to tip the scales to BP. BP now yields 6%, but at 5.8%, Shell's yield is still handsome, plus the company is a strong investment.

In June, Shell's management provided a six-year outlook, through 2025. It increased its organic free cash flow outlook to $35 billion for 2025. Based on that estimate, the company says it could distribute $125 billion -- or more -- to shareholders through dividends and buybacks between 2021 and 2025. That has to be music to a dividend investor's ears.

Those predictions are based on the assumption of an average oil cost of $60 per barrel, and there's no guarantee that that's going to be the reality in 2025. Still, Shell has amassed an excellent track record of returning value to shareholders. The company is likely to complete a $25 billion share-buyback program by the end of 2020, bringing total shareholder distributions to $90 billion between 2016 and 2020. That would mark a 42.2% increase over the prior five-year period (2011-2015). Even better, Shell has been able to do it while reducing debt, cutting costs, and -- in recent quarters -- generating impressive results.

Even though Shell isn't paying the highest yield, it's still a buy for dividend investors.

Ready to smoke the competition

Rich Duprey (Altria): Tobacco giant Altria still represents a huge investment opportunity. Although its legacy cigarette business remains in a secular decline, technological innovations in electronic cigarettes and the potential for the opening of new markets make the 6.5% dividend yield even more juicy.

Cigarette sales may be slowing, but Altria's partnership with Philip Morris International (NYSE:PM) to market and sell its IQOS heated tobacco e-cig in the U.S. under the Marlboro brand presents a unique opportunity to capture sales from those looking to quit traditional combustible cigarettes. Because the Food and Drug Administration is clamping down on e-cigs and introducing a sped-up timetable to submit plans to comply with new regulations -- something Philip Morris already did with the IQOS -- there's the very real possibility Altria will be the only e-cig manufacturer on the market, at least for a little while.

Moreover, despite some doubts about whether Juul will ever be approved in the U.S. because of its association with teen e-cig use, there are massive opportunities elsewhere in the world. For example, Juul is entering the Vietnam cigarette market, the second-largest smoking market in the world. That gives it the potential to notch tremendous sales growth there, still validating Altria's $13 billion investment in the e-cig maker. For the U.S. market, it may be a bust, but the world's still a big place, and most other countries haven't stepped up scrutiny of cigarette alternatives the way U.S. regulators have.

It will take quite a number of years before e-cig revenue equals that produced by traditional cigarettes, but cigarette smoking is still going to be around for a long time, too. And with Juul, Altria now has global opportunities that it didn't possess before after calving off Philip Morris International, so this tobacco stock is still very much a growth stock.