Please ensure Javascript is enabled for purposes of website accessibility
Free Article Join Over 1 Million Premium Members And Get More In-Depth Stock Guidance and Research
By Asit Sharma - Jul 18, 2019 at 11:55AM

For Union Pacific ( UNP -1.01% ), the second quarter of 2019 presented little surprise on the revenue front, as investors were expecting a smaller top line against the prior year, given weakening volume in the rail industry. But the company chalked up considerable progress on operational efficiency and cost control, as shown in its earnings filing issued Thursday morning before the markets opened.

Here are headline numbers and essential details from Union Pacific's results over the last three months. Note that all comparative numbers are presented against the prior-year period.

What happened with the railroad this quarter? 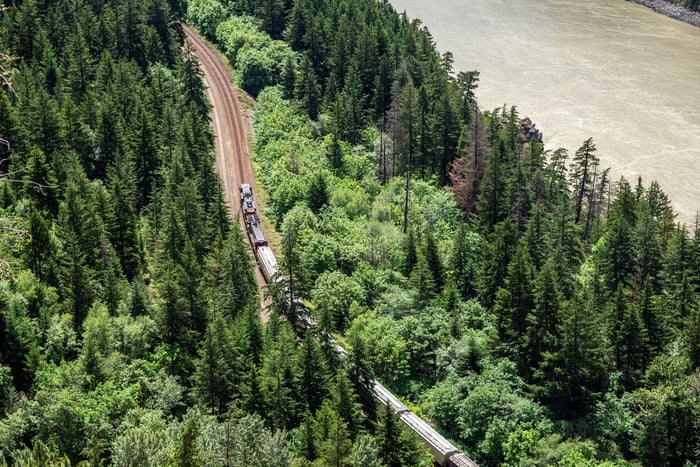 CEO Lance Fritz lauded Union Pacific's efficiency in the company's earnings press release Thursday. He also alluded to the difficulty of achieving improved results given lingering weather issues that stymied operations last quarter: "We delivered record second quarter financial results driven by exceptional operating performance, including an all-time best quarterly operating ratio of 59.6 percent. These results are a testament to the dedication of the men and women of Union Pacific, who are embracing Unified Plan 2020 and who worked closely with our customers to overcome numerous weather challenges."

Fritz signaled the potential for further progress in lowering the railroad's OR. The company now has its full-year target of booking an OR of below 61% within grasp. Fritz also hinted at further significant share repurchases in the back half of 2019: "We look forward to building on the momentum from Unified Plan 2020 and providing a consistent, reliable service product for our customers. We remain focused on driving increased shareholder returns by appropriately investing capital in the railroad and returning excess cash to our shareholders."

In my earnings preview, I discussed the possibility of Union Pacific offering up OR and margin improvement as an offset to a weaker top line. This scenario appears to have materialized, as management is focused on what it can control (efficiency and the exercise of cost discipline), as opposed to battling a macroeconomic environment in which trade uncertainty and slowing manufacturing output are pressuring rail industry volumes.