Artificial intelligence (AI) is expected to create new industries, make existing ones more efficient, and generate revenue from new businesses that could create a $13 trillion market by 2030, according to research by consulting firm McKinsey & Co.

Nearly every major technology company is talking about what it's doing to tap into the growing market. But how can investors push through the noise and find one of the top stocks in artificial intelligence? Fortunately, betting on an AI leader is as simple as looking to one of the most prominent technology companies in the world: Alphabet (NASDAQ:GOOG) (NASDAQ:GOOGL).

Sure, the company makes most of its money from advertising. But here are three reasons why investors looking for a top AI stock should look at Alphabet. 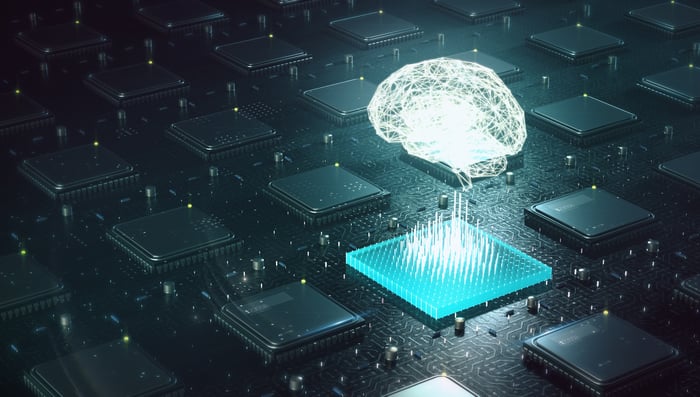 One of the more pervasive uses of Alphabet's artificial intelligence comes in the form of its smart digital assistant, Google Assistant. This AI system is baked into the mobile Android operating system and is also inside of the company's smart-home devices. It listens to a user's voice commands to search the Internet, find files, track packages, check the weather, and set reminders.

Google Assistant is becoming an increasingly important AI tool for Alphabet, as more people (especially younger ones) opt to use voice commands on their phones rather than typing. Research by comScore shows that 50% of smartphone users already use voice technology on their phones regularly. Additionally, Alphabet is using Google Assistant as a key feature of its Nest smart-home speakers and devices.

As it adds its AI assistant into more devices, Alphabet benefits by collecting data from voice searches to learn more about its users. The more the company knows about what users are searching for, the better it can serve them targeted ads.

Alphabet bought DeepMind, an artificial intelligence company, back in 2015 and the company has used it, in part, as a way to improve healthcare. For example, DeepMind algorithms have analyzed anonymized data from the Department of Veterans Affairs to help predict whether patients could have dangerous kidney damage.

Another Alphabet company, called Verily, has used artificial intelligence to help doctors in India diagnose people with diabetic retinopathy. Verily also uses AI to teach surgical robots to learn from past operations and improve how they conduct new ones.

If all of that isn't enough, Alphabet's Calico subsidiary is using AI to try to identify ways for humans to extend their lives.

One of the most well-known uses of Alphabet's AI is in the company's self-driving car company, Waymo. The company has completed 10 million miles of autonomous driving on public roads and 10 billion simulated miles.

Waymo's AI allows its vehicles to see the world around them and learn from their driving experiences. The company launched one of the first commercial autonomous ride-sharing services at the end of last year.

Waymo is one of Alphabet's biggest commercial bets on AI, in part because global autonomous-vehicle sales are expected to reach 33 million vehicles annually in 2040. The value of the global market is projected to reach $7 trillion in 2050.

Artificial intelligence has the potential to transform everything from how we get around town to how we fight diseases. But there's no guarantee that Alphabet will create viable businesses from all of its AI pursuits. The good news for investors is that Alphabet has diversified how it uses AI across many different businesses and industries, making it more likely that the company will eventually be able to benefit from artificial intelligence.

For example, Waymo's projected value over the next decade could reach as high as $100 billion by some estimates. Waymo has been clear that it plans to make money from driverless cars by licensing out its technology to other companies.

Investors should be patient with Alphabet's AI moves and keep a long-term perspective on the company's stock. With Alphabet's massive resources and its ongoing bets on AI, the odds are good that this company will remain a top artificial intelligence stock for years to come.