By now, most investors in CSX (NASDAQ:CSX) will know that the stock slumped following a disappointing set of earnings and guidance in the second quarter. The key takeaway from the earnings presentation was undoubtedly the cut in full-year revenue guidance on the back of a weaker-than-expected economy. Is it now time to bail out of the stock, or is it a buying opportunity? Let's take a closer look.

Railroad stocks are cyclical and always will be, and their revenue will follow trends in the economy. However, in recent years, the wide-scale adoption of Precision Scheduled Railroading (PSR) has led to significant improvements in profitability. 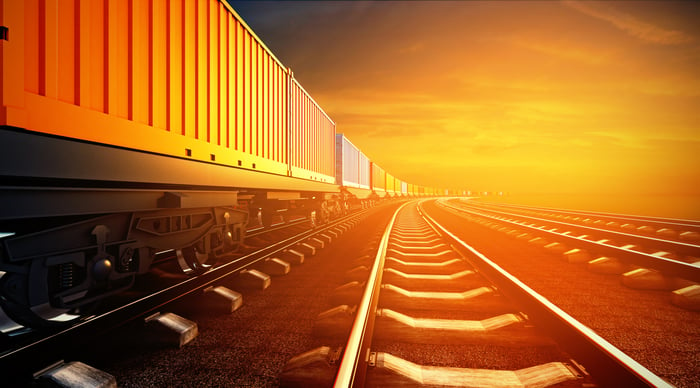 In a nutshell, PSR is a set of principles whereby railroads tend to run fixed scheduled trains from point A to point B rather than a hub and spoke approach. Even though CSX's revenue growth is undoubtedly going through a cyclical slowdown, PSR has brought about significant improvements in its operating ratio (operating expenses divided by revenue, therefore a lower number is better), and that's helping to counteract weakness in revenue growth.

The impact of these productivity improvements (train velocity increased and terminal car dwell was reduced -- both positives) can be seen in the reduction in operating expenses during the second quarter. Ultimately, this helped CSX offset a fall in revenue and meant the railroad could increase its operating income in the quarter.

Is a falling operating ratio enough?

That said, if revenue keeps falling, then even an improving operating ratio won't be enough to stop earnings from declining. Moreover, management now expects full-year revenue to decline by 1% to 2% compared to a previous forecast for growth of 1% to 2%. The reason?

During the earnings call, CFO Kevin Boone said, "Our change in our revenue guidance is largely, evenly attributable between our three segments of coal, merchandise and intermodal." Coal's weakness is largely a consequence of lower gas prices causing a relative decline in the use of coal for electricity production.

Within merchandise, Boone cited a softer industrial environment notably in automotive, chemicals, and metals & equipment. Intermodal revenue was down 11% on a 10% decline in volume "primarily due to the impact of lane rationalization implemented last fall and early this year," according to CEO James Foote on the earnings call.

However, as Boone pointed out, CSX is "not immune from some of the pressures that the entire US intermodal industry is facing right now with a weak trucking market coming off an exceptionally strong 2018."

The case for buying CSX stock

Clearly, the industrial economy is slowing -- recent results from industrial supply companies confirm this, too -- but overall, the outlook is still for GDP growth in 2019 and 2020. In such an environment, railroads would be expected to grow revenue, and recall that a large part of CSX's decline in intermodal was due to actions taken (lane rationalizations) with the intent to improve the operating ratio, while there's little management can do about the price of gas relative to coal.

In other words, CSX should get back to seeing revenue growth at least rise at the same pace as GDP growth in the U.S. in the future. Throw in ongoing reductions in the operating ratio (meaning income margin will go up) and a relatively attractive free cash flow (FCF) based valuation, and it's not hard to build a case for buying the stock right now. 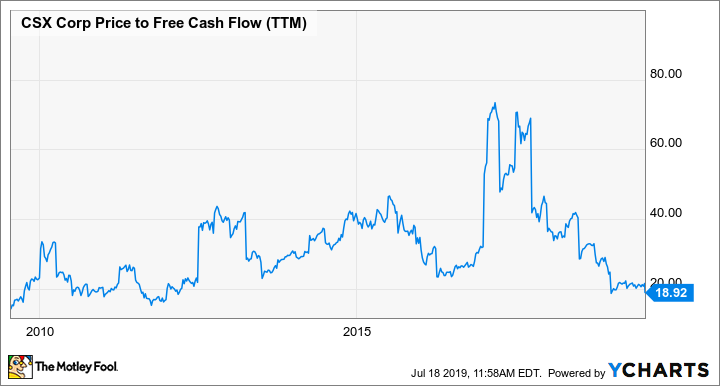 On the other hand, based on a current price of $70 per share, investors might decide that with a price-to-FCF multiple of around 20 and the risk of more revenue deterioration in the near term, the stock is no more than a fair value. After all, CSX's combination of low-single-digit revenue growth and high-single-digit earnings growth isn't the most compelling on the marketplace right now.

If you like the stability and competitive moats inherent in the railroad sector in the long term and don't mind riding out the potentially bad news flow over the next few quarters, then now is a good time to invest. However, for most investors, there are likely to be other stocks with more favorable risk/reward equations in the marketplace right now -- particularly for those investors who are positive on U.S. growth prospects in 2020.