The fast-food chain has put a lot of time and money into improving its menu and operations.

The burger titan has been investing heavily in technology and automation to decrease order turnaround time to help push those numbers higher. McDonald's will post second-quarter earnings on Friday, July 26. Let's see what investors might expect to hear. 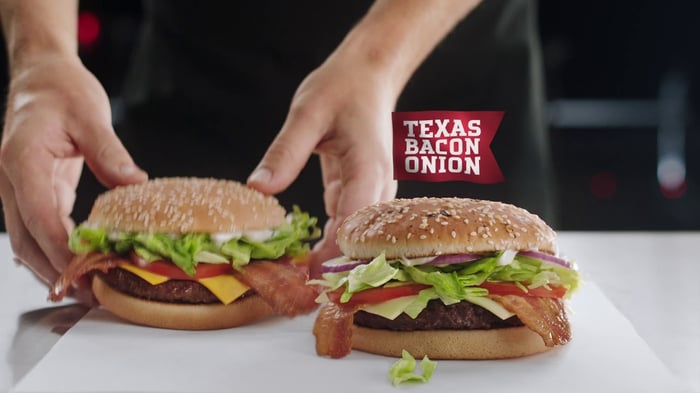 When in doubt, add bacon, and that's what McDonald's did in the first quarter, holding a national "Bacon Event" that saw the tasty meat strips added to Big Macs, Quarter Pounders, and even Cheesy Bacon fries. The restaurant credited bacon with helping to push sales higher, along with the 2-for-$5 discount bundle the chain added in recognition of the promotional atmosphere running through the burger industry.

Because the floor was raised from the $4 promotions that were previously in effect, it added a few more pennies of profit to each order, but also helped McDonald's to keep pace with the promotions from Wendy's and Burger King. The competitive environment remains fierce in fast food, which is why McDonald's technology investments are important.

Hundreds of drive-thrus have been outfitted with the artificial intelligence capabilities from its Dynamic Yield acquisition. The system uses data collected from its millions of customers served daily to make order suggestions based on factors like time of day, weather, menu items that are trending, andwhat the customer has already ordered. It will eventually be added to all of McDonald's digital access points, such as mobile ordering and self-order kiosks.

CEO Steve Easterbrook has said the technology offers the added benefit of increasing average ticket amount because when customers control the ordering, they end up spending more.

Labor and delivery will be key items

We'll likely hear that McDonald's has expanded the presence of such innovations at more restaurants during the quarter, and possibly how its new kitchen technology improvements are faring. For example, a new automated process for dunking fries, fish patties, and other items into fryers is now being tested in a handful of kitchens -- ostensibly to assist employees with their workflow, but eventually it has to mean fewer employees are hired.

McDonald's continues to face high labor cost pressures due to its own actions of raising wages, as well as nearly two dozen states raising the minimum wage. CFO Kevin Ozan said it was safe to say "labor inflation is going to continue to be a challenge."

Delivery will also be an important component of McDonald's growth program. Easterbrook said it had grown to a $3 billion business globally through its partnership with Uber Eats. It now offers delivery in over 20,000 restaurants across more than 75 countries, but McDonald's just ended the exclusivity contract it had with Uber and will now also use DoorDash to deliver food for over 200 McDonald's locations across Houston.

The bottom line is expanding

Analysts forecast revenue to be essentially flat in the second quarter, coming in at $5.33 billion, just slightly below the $5.35 billion McDonald's posted last year. But Wall Street foresees profits widening in the period, growing to $2.06 per share from $1.99 per share a year ago. That would undoubtedly come from the focus on more premium menu items even as it streamlines its menu to make it easier to compile orders and make the order process faster.

McDonald's has a lot of initiatives at play and the many moving parts all impact different aspects of the business, but they're all aimed at building a better burger shop, and the investments should start paying off -- perhaps as soon as the second quarter.