40 million Americans receive food stamps, but even more may own food stocks. It would be a mistake for investors in food stocks to ignore this new proposal.

President Trump has done it again. And by "it," I mean kicked a hornet's nest with a new policy proposal.

On Tuesday, the U.S. Department of Agriculture rolled out a plan to restrict access to the government food stamp program -- also called the Supplemental Nutrition Assistance Program, or SNAP -- by separating eligibility for food stamps from eligibility for the related Temporary Assistance for Needy Families, or TANF, program. Reuters reports that, if implemented, the new policy proposal could end food stamp assistance for as many as 3.1 million citizens. 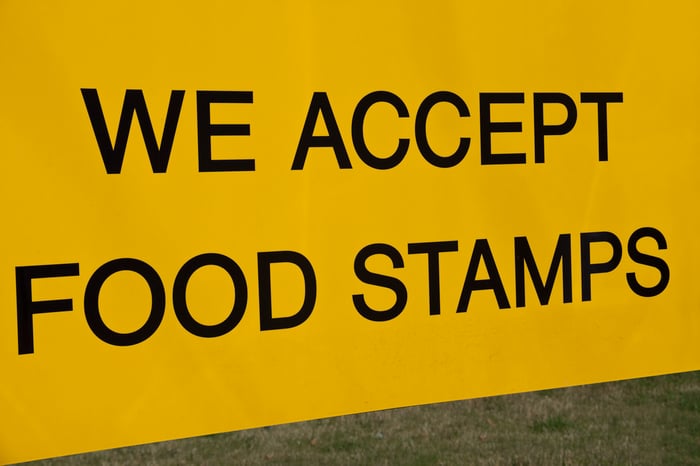 What is SNAP, and how would it be restricted?

SNAP and TANF are similar in focus -- both aim to supplement the incomes of America's poorest. SNAP provides free food (mostly through vouchers) to some 40 million Americans (many of them children), or about 12% of the total U.S. population. USDA says that some food stamp recipients are abusing the program after being automatically enrolled in SNAP by virtue of qualifying for TANF (estimates put it at 3.1 million people). In requiring proof of separate eligibility, USDA aims to curtail abuse and save $2.5 billion in taxpayer money.

That sounds like it might be a good idea, but it could have two side effects: potentially denying $2.5 billion of assistance to folks who might actually need it, and eliminating as much as $2.5 billion in spending on groceries every year. That will hurt revenues of both food companies and grocery store chains.

Actually, $2.5 billion may just be the beginning. Reuters also suggests that this week's proposed restriction on SNAP access could be just the first step toward President Trump's ultimate goal of shutting down the food stamp program entirely and saving taxpayers $15 billion in annual outlays on SNAP in the process. (Note that various sources attach various numbers to the potential savings, but for the purposes of this article, I'll be taking the president's estimate as a given.)

Gallup poll data confirm that "most" American adults own stocks in some form or other, whether via a 401(k), individual retirement account, or membership in a pension plan. Out of an adult population of 252 million-odd humans, that works out to at least 120 million stockholders in the U.S -- three times as many as there are food stamp recipients.

And while it's difficult to say for certain how many of these stocks are "food stocks" -- that is, shares of companies that grow, process, or sell food -- chances are good it's a significant number. Walmart, for example (the nation's largest retailer of groceries), Kroger (the biggest pure-play grocery chain), and Kraft Heinz (maker of macaroni and cheese, a staple food of the American family) are all members of the S&P 500, which is in turn represented by the SPDR S&P 500 ETF, consistently ranked America's most popular ETF.

So what might be the consequences of the USDA's move for food stock investors? Honestly, the implications could range from modest to significant. Let's consider the more modest -- and more likely -- scenario first.

According to the latest information from the USDA itself, "in 2017, U.S. consumers, businesses, and government entities spent $1.62 trillion on food and beverages in grocery stores and other retailers and on away-from-home meals and snacks."

Admittedly, this is a wide net, capturing the 53.8% of "food" budgets that Americans spend on restaurants -- which generally do not accept food stamps. But even if you exclude restaurant receipts, that still leaves Americans spending some $748 billion a year on food at grocery stores and other non-restaurant food sellers.

Now, divide the $2.5 billion in "savings" USDA hopes to gain from removing 3.1 million Americans from the food stamps roll by the $748 billion in total spending on food, and you have an educated guess: This new policy could reduce grocery store spending by approximately 0.33% annually.

Admittedly, that's not a significant share, and probably not something investors need to worry about.

Things could get worse

But now comes the worst-case scenario: What would happen if President Trump (or some future president) should eliminate the SNAP program entirely? If the government goes for the entire $15 billion in promised savings from eliminating SNAP, the impact on grocery store revenues would swell six times in size. Eliminating food stamps could reduce revenues at grocery stores by a full two percentage points.

Granted, that still might not sound like a lot. But consider that Walmart's revenue growth forecast for next year, for example, is expected to amount to just 2.7%, according to data from S&P Global Market Intelligence. Eliminating food stamps could be enough to snuff out nearly a full year's sales growth for Walmart in the year it happens. For that matter, Kroger's revenue growth next year is estimated at only 1.5%, while Kraft Heinz's is only 1.2%. Eliminating SNAP could conceivably push both Kroger and Kraft into negative territory for the year.

The upshot for investors: For the time being, we're still talking in hypotheticals. The USDA has proposed a change in the rules for eligibility for SNAP. Enacting said change is far from a certainty -- much less eliminating SNAP entirely. Still, the trial balloon has been released. It would be a mistake for investors in food stocks to ignore it entirely.

Forewarned, as the saying goes, is forearmed.