Universal Music Group had a huge first half, sending earnings up more than threefold at the midway point in 2019.

Vivendi ( VIVHY 0.00% ) reported its first half of 2019 results on July 25 and it gave investors a lot to like. Revenue was up 13.6%, EBITA -- earnings before interest, taxes, and amortization (similar to U.S. EBITDA) -- was up 32%, and net income attributable to shareholders surged 320% (though only 41% adjusting for non-recurring items).

The biggest driver behind Vivendi's revenue and profit surge was Universal Music Group, or UMG, which reported record revenue of 3.26 billion euros and 481 million euros of EBITA. Moreover, the company announced the execution of a massive share buyback in recent months that's likely to get even bigger once it completes the plan to sell a stake in UMG in the near future. 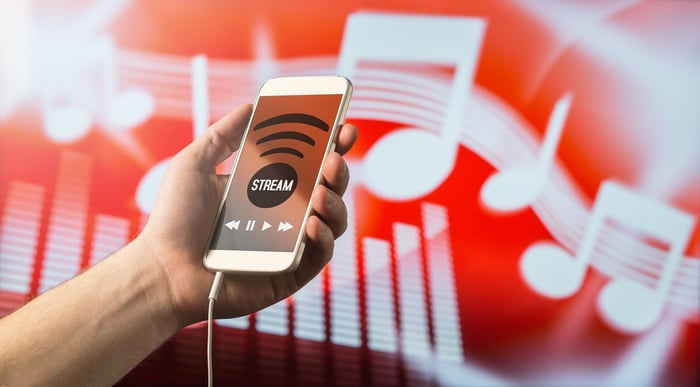 Let's take a closer look at Vivendi's results so far this year.

Since it's not directly listed on a U.S. exchange -- Vivendi's shares trade "over the counter" and not as a sponsored American Depository Receipt (ADR) -- Vivendi doesn't submit financials to the SEC or provide financial information in U.S. dollars or according to U.S. generally accepted accounting principles (GAAP) standards. For that reason, all of the currency information below is in euros and will follow Vivendi's update, which is the first six months of the year, not just the second quarter.

Here are the highlights for the first half of 2019:

In millions. Source: Vivendi. EBIT = earnings before interest and taxes.

The biggest driver behind Vivendi's big earnings jump was UMG, which saw revenue increase 19%, to 3.3 million euros, and EBITA of 481 million euros, up 44% and two-thirds of the company's total EBITA result.

Vivendi's pay-tv business reported a 2.2% decrease in revenue, to 2.5 billion euros, as cable subscriptions in most developed markets lag under the pressure of cord-cutting. The company continues to take steps to improve profits, reporting EBITA of 233 million euros after adjusting for restructuring expense, up slightly from 221 million euros year over year. Vivendi also continues to make acquisitions to expand Canal+ geographically, with deals in Nigeria and the acquisitions of a European pay TV operator and the Mezzo channel.

Vivendi's advertising and public relations business reported 4% revenue growth, to 1.1 billion euros, with the majority of that growth from acquisitions. Organic revenue increased 0.2% in the first half of the year. EBITA was up 6%, to 108 million euros.

Only added to Vivendi family in February, Editis, the company's new publishing arm, reported 89 million euros in revenue as a Vivendi subsidiary and 134 million euros including sales before the acquisition closed. Vivendi has a number of plans for Editis, including leveraging both UMG and Havas to grow and promote it.

Vivendi operates a number of other smaller businesses that generated 91 million euros in revenue, a 2.3% decline year over year.

While the addition of Editis and the steady expansion of Havas are expected to help balance out the secular trend of cord-cutting that's impacting the pay-TV part of Canal+ Group, probably the biggest unknown is how Vivendi will look once it finally sells off a minority stake in UMG. The company disclosed last year its intent to sell just half its interest in Universal Music Group, a surprising move considering that UMG continues to be its best, most-profitable business unit.

As of this writing, the company seems to be on track. It disclosed that it has selected the advisory banks it will work with and established contact with several "potential strategic partners." Whether it can accomplish the goal of completing the sale within 18 months of the initial announcement remains to be seen. (It would need to wrap things up close to year-end to do that.)

Moreover, the company has started executing on its plan to repurchase a substantial amount of shares. From May 28 to July 23 of this year, the company repurchased 64.465 million shares, or 5% of shares outstanding. In June and July, the board of directors canceled a total of 94.679 million shares -- including about 30 million shares previously repurchased -- removing 7.23% of shares outstanding from existence while retaining 7.8 million, mainly to cover employee stock-incentive plans. The company also paid its 0.50 euros per-share dividend in April, 11% higher than last year's dividend.

Vivendi didn't offer any earnings guidance for the rest of the year or beyond, but there's little doubt that the biggest thing investors should continue to monitor is the progress toward selling part of BMG. The company is likely to return a substantial portion of those proceeds to shareholders, either through buybacks, dividends, or more likely, some combination. Stay tuned over the next few quarters as the story plays out.