Lockheed Martin (NYSE:LMT) has been a highflier among defense stocks in recent quarters, fueled by an impressive portfolio headlined by the F-35 Joint Strike Fighter. The company's latest quarter continued the positive trend, with Lockheed easily beating estimates and raising guidance for the full year.

The outperformance in recent years has been driven by the slow and steady ramp-up of the F-35, potentially a trillion-dollar program, as well as the U.S. government's hunger to replenish its missile stocks and update missile defenses. Those trends are going to take time to play out and should provide Lockheed Martin a boost for the next few years. 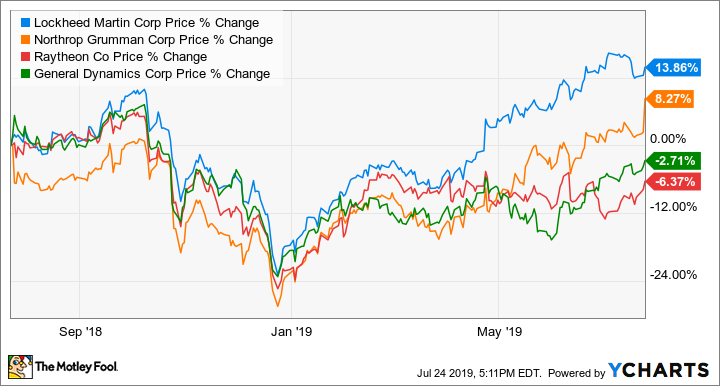 Lockheed Martin's second quarter provided a clear indication that the bull case for the stock is intact, while also hinting where new growth, and the potential for continued outperformance, will come from. Here's a look at the quarter, and what management has to say about Lockheed Martin's long-term prospects.

Revenue up across the board

Lockheed Martin earned $5 per share in the second quarter on revenue of $14.4 billion, easily surpassing analyst expectations for $4.77 per share in earnings on sales of $14.2 billion. It's the second straight quarterly beat in 2019.

The rest of the year looks good as well. Lockheed hiked its full-year guidance for the second time, now saying it expects $20.85 to $21.15 per share in earnings on sales of $58.25 billion to $59.75 billion. The company expects to generate operating cash of $7.6 billion for the year, up from previous guidance of at least $7.5 billion.

Lockheed Martin grew sales by nearly 8% year over year, led by 15.6% growth in missiles and fire control, 11% growth from space, and single-digit gains from rotary and aeronautics. The company was also a cash generating machine in the quarter, boasting a cash conversion rate -- a measure of a company's ability to convert earnings into free cash flow -- of 120% in the period.

Things weren't all rosy for Lockheed Martin. The company is scrambling to find alternate supply sources for F-35 components following the U.S. government's decision to remove Turkey from the fighter program, a process that could take until early 2020 to complete. Lockheed Martin CEO Marillyn Hewson in a post-earnings call with investors said the resourcing effort is "a pretty fluid situation," but one the company had been preparing for.

"It's been percolating for a while," Hewson said. "[W]e addressed it early and have been working closely with the Pentagon, and even they have requested reprogramming dollars out of Congress to support it."

Turkey's plan to purchase up to 100 of the jets is also in doubt, though Lockheed Martin is not expected to have problems finding new buyers as allies including Poland explore interest in the fighter.

The company also warned that it expects to increase spending in 2019 and sustain those higher levels for the next few years. Perhaps for that reason, the stock had a tepid reaction to the earnings beat, with shares falling initially before closing flat on the day.

In a lot of its projected growth areas, such as missiles, the F-35, and a number of new opportunities in rotary, Lockheed Martin appears to already be laying the groundwork for the next big thing. The Pentagon is focused on hypersonic technology -- weapons and interceptors able to travel at least five times the speed of sound -- and early evidence indicates that Lockheed Martin is out in front of its competitors in producing the tech.

Lockheed Martin has won most of the big contract awards in hypersonics over the past year, and has about $3.5 billion in deals either already included in its $137 billion backlog or soon to be added as deals are finalized. The company expects to book about $600 million in sales from hypersonics in 2019, work that was mostly not in its initial guidance, with the funding on the initial contracts expected to continue to pour in for two more years. 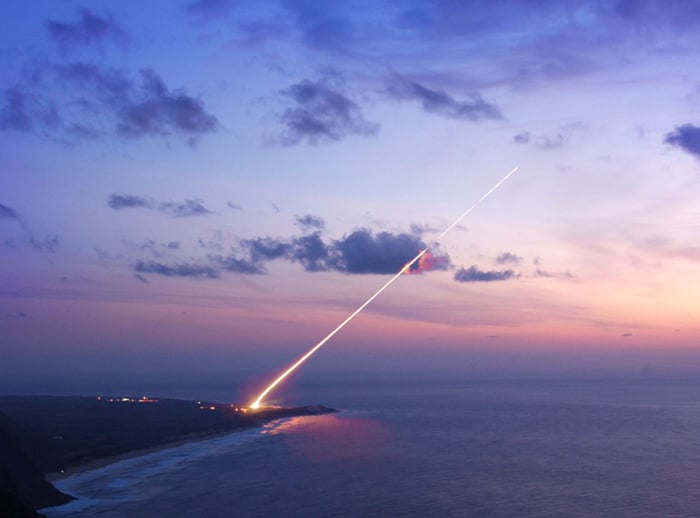 CFO Kenneth Possenriede said during the conference call that Lockheed needs to add capacity at its legendary Skunk Works research facility in Palmdale, California, to handle some of its recent classified wins. Possenriede didn't detail the work to be done but did note a recent second customer order for a big classified job won last year. He's almost certainly referring to hypersonics, and Lockheed Martin's willingness to invest in expansion suggests the company's outlook for additional business is strong.

There's a near-term cost to this expansion. Possenriede said he expects $1.7 billion in capital spending for the year, and similar amounts over the next few years. That's a sharp rise from the $1.3 billion in capex in 2018 and $1.2 billion in 2017.

Expansion at Palmdale is one factor in the growing outlays, but Lockheed also needs to invest in its missile business to ramp up production and has some space programs that have strong capital requirements.

One for now and for the future

The Turkey troubles and capex guidance seemed to weigh on investors post-earnings, but it's important to remember that Lockheed Martin is raising earnings targets and exceeding expectations even while investing for the future. Defense contracts tend to grow more profitable as they mature, and the initial research and development effort is paid down, so Lockheed Martin is spending now for a big payoff down the line in areas like hypersonics.

When asked on the call how Lockheed Martin was managing to seemingly post market-share gains and take the lead in new areas like hypersonics, Hewson responded that the company's size, and its willingness to invest, is a huge advantage:

I would just say that we've put innovation and investment in extending our products and investing in new products as the priority in this company. I mean, that's -- we know that, that's where we bring value to our customers. And so it's long-running investments that we've been making into the programs that are coming to fruition that allows us to win. For example, hypersonics is a great example of that, a lot of the work that we've been doing in that for a number of years.

Lockheed Martin is winning today and is making the investments that will allow it to win tomorrow. Investors can buy into the company at a valuation in line with its competitors and enjoy a sector-best dividend yield along with the strength of the portfolio.

Lockheed Martin shares didn't get much of a pop stemming from the company's latest quarterly beat, but the results make the case that this titan remains among the best buys in the defense sector.