Please ensure Javascript is enabled for purposes of website accessibility
Log In Help Join The Motley Fool
Free Article Join Over 1 Million Premium Members And Get More In-Depth Stock Guidance and Research
By Rich Smith - Aug 1, 2019 at 10:46AM

One analyst thinks a wet spring and summer could lead to a "bumper" year in 2020.

In just under a week, Mosaic (MOS 3.03%) will report Q2 earnings -- but one analyst isn't waiting around to hear the news.

Instead, Citigroup says you should go ahead and buy Mosaic now. Predicting the nation's second-biggest fertilizer maker by sales could hit $31 a share within a year, Citi analysts upgraded the stock to buy on Wednesday. 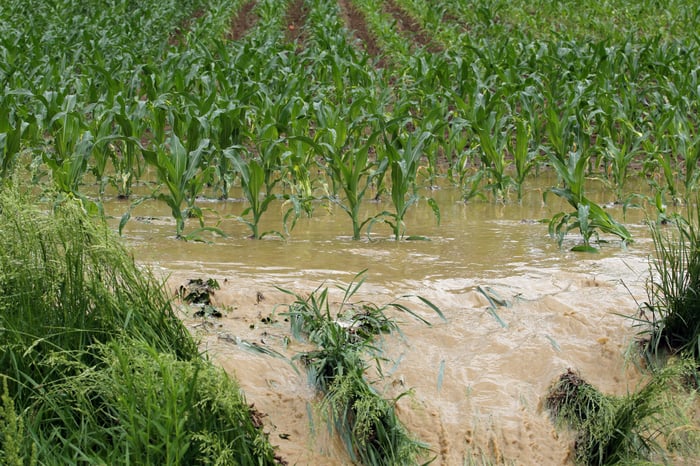 It never rains but it pours

The 12-month span between May 2018 to April of this year was the wettest 12 months in U.S. history, according to the National Oceanic and Atmospheric Administration -- or at least, the wettest we've seen in the 124 years the government has been keeping track.

That's basically what we've been dealing with here in the Midwest, and the result has been a "disappointing" year for crop output, according to TheFly.com, which covered Citi's note yesterday. While weather has moderated in July, as recently as June Ohioan farmers were reporting they'd planted only half what they were supposed to because of heavy rain -- and Hoosier farmers were reporting only 31% planting completion!

Fewer seeds planted in time means less time to grow, less time to fertilize, and less money spent on fertilizer this year. And yet, Citi believes this could lead to a "bumper" year for fertilizer makers in 2020 (assuming the weather cooperates). Logically, farmers who were prevented from reaping what they wanted to in 2019 will attempt to make up for lost yield next year -- and buy the fertilizer they will need to accomplish that.

Consequently, even if 2019 is a wash, Citi says it's getting "more positive" on Mosaic's prospects for selling fertilizer in the U.S. in 2020. The banker is also feeling "more constructive" on the potential for sales picking up in the next few months as the growing season arrives in South America.

At the same time, Citi finds encouragement in "solid growth" in sales at Mosaic rival Nutrien (NTR 1.57%) -- the company formed by the merger of Potash of Saskatchewan and Agrium in 2017. Although profits were down in the most recent quarter, Nutrien's sales grew a respectable 6.5%, and StreetInsider.com quotes Citi saying that Nutrien's potash "pricing and volume" in particular are looking "strong." And if you look at the two companies' relative sales of potash, the $2.2 billion that Mosaic sells annually makes up 23% of the company's sales, according to data from S&P Global Market Intelligence. Relative to Nutrien's $2.7 billion in potash sales (only 14% of total company revenue), it would seem likely strength in the potash market should work even more to Mosaic's benefit than to Nutrien's.

In other words, while there's certainly bad news surrounding Mosaic today, the news isn't all bad. Moreover, Citi argues that the bad news is already "priced in" -- with the result that "MOS is now the worst performing fertilizer stock YTD."

Does that make Mosaic a buying opportunity -- or is there perhaps a reason the stock is down so much?

Consider the valuation: With $558 million in trailing profits (and even weaker free cash flow), Mosaic stock really doesn't look that attractive to me at a P/E ratio of 17 and a projected earnings growth rate of only 7%. What's more, if you factor in the company's sizable debt load -- $4.6 billion net of cash on hand -- Mosaic's debt-adjusted P/E rises past 25.

Granted, if Mosaic enjoys a "bumper" year for sales in 2020, as Citigroup predicts, that could lift earnings in the short term and lower the P/E somewhat. Longer-term, however, if the earnings growth rate is only going to be around 7% or so over the next five years, I just can't see my way to recommending a stock with a P/E two or three times that number.

Citi's optimism notwithstanding, I simply do not agree that Mosaic shares are a buy.