I don't mind eating some humble pie. Leading into Under Armour's (NYSE:UAA)(NYSE:UA) second-quarter 2019 report, I wrote about how big rebounds in business for some of the athleticwear company's peers could mean a similar story was in store for Under Armour, too. I wasn't even a little bit right.

While the athleisure movement (basically, wearing gym clothes, but not at the gym) has meant good times for many, Under Armour can't seem to get the formula right and keeps losing business here in the states, only partially offset by respectable, but comparatively modest, expansion overseas. At the midpoint of 2019, there remain more questions than answers to the sports apparel company's problems. 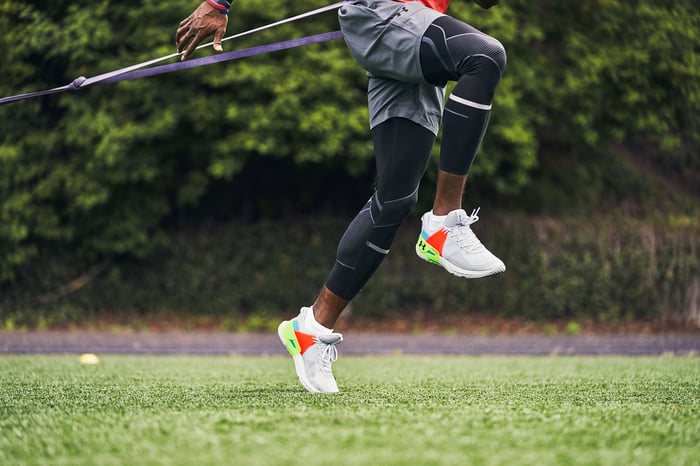 In case you missed my miss

2018 wasn't exactly a great one for apparel companies. Growth rates decelerated through the year, both domestically and internationally. Through the first half of 2019, though, trends started to reverse. North American sales at Nike (NYSE:NKE) finished out the company's 2019 fiscal year up 7% in both the final quarter and for the full-year period. International sales were also up double digits, including a 21% gain in China.

The story has been similar for Skechers (NYSE:SKX). After dipping into the single digits for the first time in years during the first quarter, international growth came roaring back with a 20% gain during the second quarter. Domestic sales also rebounded and notched a much-needed positive quarter with a 1.5% gain after falling 6% in Q1.

But there would be no such luck at Under Armour as I thought there might be. Instead of posting a rebound, the company reported another 3% drop in U.S.-based sales -- the third quarter in a row at that rate -- and international business held steady at a 12% growth rate. In combination, Under Armour grew the top line by a meager 1% in the second quarter of 2019. Trading at a premium on expectations that things would turn around, the stock is down double digit percentages since the July 30 report.

"Changing the tires while driving"

Under Armour is staying committed to its premium image and focus on high-performance gear, whereas industry peers have allowed more casual athletic-inspired apparel to creep into the mix to maximize growth from the athleisure movement. While noble, it hasn't exactly been a winning strategy for Under Armour, and losing some rack space at what was once a key distributor in Dick's Sporting Goods hasn't helped. Even the online direct-to-consumer strategy is a mixed bag, in comparison to the all-out growth digital selling has been delivering at Nike, Skechers, and elsewhere around the retail industry.

Granted, Under Armour is partway through a reworking of its business model. Much of that is behind-the-scenes work streamlining its operations and building out its distribution network outside of the U.S., but it also has to do with continual product innovation as well. CEO Kevin Plank compared the journey to "changing the tires while driving" as Under Armour tries to keep business stable all the while making adjustments. Nevertheless, while the sales picture in its home market isn't in all-out contraction, Under Armour not mustering any growth at all does mean it's losing market share to its competition.

In the meantime, the stock is still fetching premium valuation as if it is in high-growth mode and in an industry leadership position. Shares currently trade for 45.5 times expected one-year forward profits and 23.5 times trailing one-year free cash flow. Some of that premium is based on an expected rebound, but at some point, there should actually be signs of life to justify the price tag.

With management admitting it still has work to do to fix its selling model, there isn't much to get overly excited about. Full-year 2019 guidance is still calling for slight declines here in the states and low- to mid-teens growth internationally. Put simply, Under Armour's business isn't yet the seaworthy vessel ready to take full advantage of the rising athletic apparel tide I thought it was.