Please ensure Javascript is enabled for purposes of website accessibility
Log In Help Join The Motley Fool
Free Article Join Over 1 Million Premium Members And Get More In-Depth Stock Guidance and Research
By Leo Sun - Aug 7, 2019 at 11:15AM

Shake Shack (SHAK 7.88%) this week announced that it will integrate its POS (point of sale) systems into Grubhub's (GRUB) platform for nationwide deliveries. The two companies will initially test out deliveries in four areas -- New York City, Chicago, Livingston (in New Jersey), and Darien (Connecticut) -- before expanding the service to all of Shake Shack's 150-plus U.S. locations over the next nine months.

Shake Shack previously tested deliveries with DoorDash, Caviar (now owned by DoorDash), and Postmates. The fast-food giant might still offer deliveries on those platforms, but Grubhub's integration with Shake Shack's POS systems will likely make it the preferred delivery partner.

Let's see why this deal could help Grubhub gain ground against DoorDash, which overtook Grubhub as the biggest food delivery platform in the U.S. earlier this year. 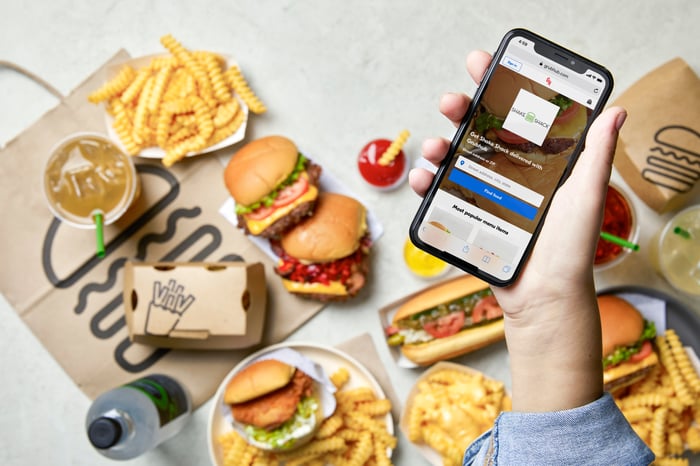 The escalating battle over big partnerships

Grubhub and its subsidiaries controlled 32.7% of the U.S. food delivery market in June, according to Second Measure. DoorDash led the market with a 33.8% share, while Uber (UBER 4.81%) Eats ranked third with a 16.7% share.

Therefore, it made sense for Shake Shack, which started in New York, to team up with the city's top delivery platform. That's also why McDonald's recently partnered with DoorDash in Houston after its exclusive deal with Uber Eats expired.

Second Measure notes that about a fifth of DoorDash's users also use Grubhub. That overlap highlights the importance of big partnerships with major restaurant chains, which could help one platform lure diners away from the other.

Grubhub wants to lock in those partners by expanding its digital ecosystem, which includes analytics tools and LevelUp's payment and loyalty services. That all-in-one service lets restaurants send orders from every channel (in-store, pickups, deliveries) straight to the kitchen, then organizes that data on a central dashboard for easy analysis. 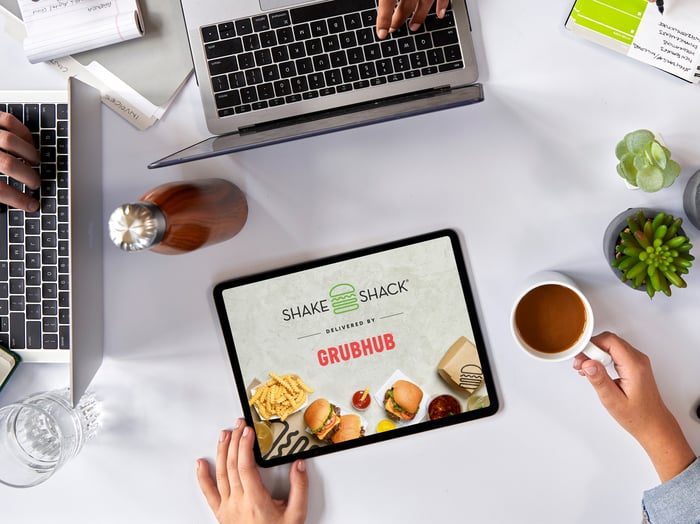 Once Shake Shack tethers all of its U.S. stores to that ecosystem, it would be logical to cut ties with other platforms like DoorDash, Caviar, and Postmates, since those orders wouldn't be logged in Grubhub's platform.

Shake Shack tested out third-party deliveries in the past, but it wasn't particularly sold on the idea. At the end of 2018, it stated that deliveries didn't "fit really well" with its business model because its meals weren't "intended to be eaten half an hour after they were cooked."

However, customer demand for deliveries is clearly rising, and Grubhub seemed to win over Shake Shack with its "Just in Time" technology, which times couriers' arrivals to the exact moment an order is ready. Shake Shack, like many other restaurant chains, also isn't keen to launch its own first-party delivery services due to the high expenses.

Shake Shack's restaurant-level operating margin already fell 230 basis points annually to 24.4% last quarter, and it expects that figure to dip toward 23% for the full year -- so it isn't the ideal time to launch first-party deliveries.

Shake Shack and Grubhub didn't disclose the financial terms of their deal, but it's likely that Grubhub agreed to take a lower cut of Shake Shack's sales in exchange for its nationwide POS integration. Therefore, partnering with Grubhub was likely a cost-effective way for Shake Shack to reach more customers with online deliveries.

Grubhub's deal with Shake Shack is another shot fired in the escalating war between the nation's top three delivery platforms. Grubhub is still more profitable than DoorDash and Uber Eats, but that profitability could fade if it tries to secure more partners with sweetheart deals.

On the bright side, other restaurants could follow Shake Shack's lead and integrate Grubhub's digital services into their POS systems -- which could significantly widen its moat against DoorDash and Uber Eats.