When billionaire activist investor Carl Icahn makes a move, investors usually listen. The activist investor and head of Icahn Enterprises (NASDAQ:IEP) has had a sterling track record over the past 20 years and is known for making purchases of beaten-down stocks, then shaking up management teams to unlock value. Icahn doesn't always "go activist," though. For instance, Icahn made a lot of money in Netflix when he invested after its Qwikster debacle, without making any management changes.

Icahn made a roughly $200 million purchase of another beaten-down tech stock, Cloudera (NYSE:CLDR), scooping up 12.62% of the company's shares over the course of many separate purchases in July. In a filing with the Securities and Exchange Commission, Icahn Enterprises also indicated that it intends to communicate with Cloudera's board about unlocking shareholder value, and may seek a board seat. Since then, he's followed up with additional purchases to take his stake all the way to 16.48%, worth roughly $290 million at current prices. 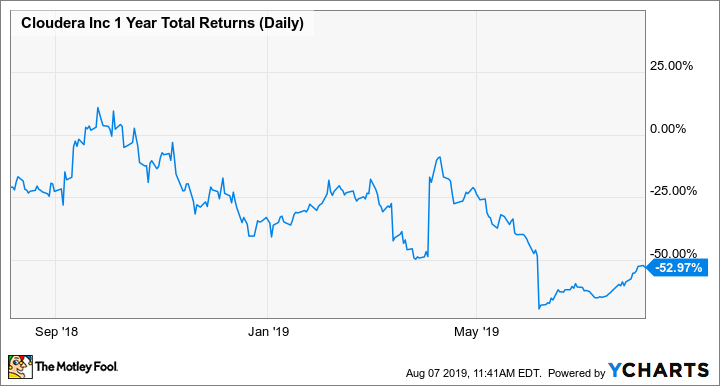 What might Icahn see in Cloudera? The company is involved in a growth sector -- open-source big-data and artificial intelligence software -- which should, in theory, be a big opportunity. Yet the company has seen its stock plummet over 50% this year and nearly 70% from its 52-week high.

Where is the disconnect? Well, Cloudera's revenue growth has been lackluster ever since the company merged with rival Hortonworks in October of last year. After the merger, the collective management had forecast a company that would grow 20% as part of its long-term model.

Yet in its last earnings release, Cloudera only forecast growth of between zero and 10% for the upcoming fiscal year. And it posted dramatically increased churn, as it lost customers to other large cloud vendors with their own in-house offerings. That led to some fears that customers are flocking to competitors offering cheaper or better options. Adding insult to injury, CEO Tom Reilly resigned from his position, and that kind of uncertainty at the top may have accelerated the sell-off.

In short, it was a disaster, with one analyst even calling the earnings call a "thesis changer."

So with such recent disastrous results, what is Icahn seeing? There are two possibilities here. One is a new product that Cloudera has been working on for some time: the Cloudera Data Platform.

Previously, Cloudera had been a seller of software for on-premises data centers at enterprises. Now, with workloads moving to the cloud, Cloudera has combined both its and Hortonworks' best features, bundling them into an end-to-end open-source platform that's optimized for hybrid cloud environments.

Cloudera expects clients will return, now that its sales teams have been briefed on the new product and the company's long-term roadmap. Management is also hanging its hat on the idea that companies will prefer a multicloud offering, allowing seamless use across clouds, to being locked into a single vendor.

The Cloudera Data Platform was unveiled to customers in June and is just beginning to be sold now. Icahn may think the delayed rollout of the CDP could lead to a resumption of growth and decreased churn.

A push for a sale?

There's also a chance, and perhaps even a higher probability, that Icahn will push Cloudera to sell itself. Selling now might yield a loss for long-term holders of the stock, but since Icahn recently bought, he could make out with a big gain in a short amount of time.

More likely, Cloudera could find a buyer among "old tech" giants struggling to grow. In that sense, IBM (NYSE:IBM) is the most likely candidate. The struggling tech giant just bought another open-source software company in Red Hat for $34 billion, just closing the deal in July. At just $1.8 billion, Cloudera is a far more "digestible" business. In fact, IBM already had a close partnership with Hortonworks prior to that company's merging with Cloudera, so the two businesses already know each other well.

Thus, there seems to be a need for the big-data and machine-learning open-source companies to boost their competitive edge, and a need for "old tech" to get into more new-age software technologies. Investors will likely see Icahn clamoring for a similar type of sale in the near future.