Shares of financial technology firm Fiserv (NASDAQ:FISV) rose 15.7% in July, according to data from S&P Global Market Intelligence. The payments processing giant rode to impressive gains on the back of a strong July earnings report, as well as optimism regarding its acquisition of First Data Corporation.

Overall, the entire sector is riding tailwinds from the wave of consolidation in the first half of 2019, as well as the long-term trend of electronic and digital technologies replacing older forms of payments. 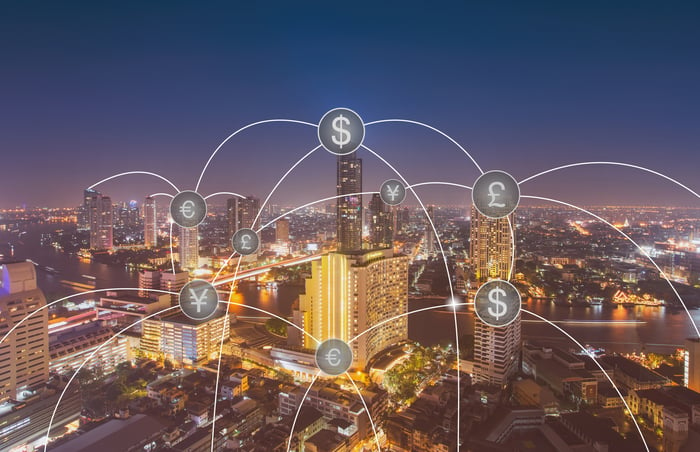 For its second-quarter earnings report, Fiserv reported revenue growth of 6.3%, to $1.51 billion, beating analysts' estimates by $10 million. The company's adjusted earnings per share (EPS) grew 9% to $0.82, which also beat analysts' estimates by a penny, sending shares up after the release. Fiserv also reaffirmed its full-year guidance for 4.5% to 5% revenue growth and 10% to 14% adjusted EPS growth, not counting the effect of the First Data acquisition.

To cap off the month, Fiserv closed the First Data acquisition on July 29.

After the acquisition, the company expects to achieve $900 million in cost synergies and $500 million in revenue synergies, though Fiserv's management expressed optimism that the combined companies could exceed both targets. In fact, due to the recent plunge in interest rates, Fiserv's refinancing of First Data's debt added another $120 million in interest cost savings.

While the current news is good, the combined companies will be up against bigger and better competition, both from young tech upstarts such as Square and Adyen, as well as the large U.S. banks. JPMorgan Chase just reported very strong results in its own merchant processing segment, and Bank of America just formally separated from its joint venture with First Data in order to take its business in-house. So while shareholders should celebrate July, the competitive landscape bears watching.