Wearable tech has been slowly gaining traction. The space has largely been dominated by fitness trackers like the ones made by Fitbit (NYSE:FIT), along with watches that go beyond fitness into advanced health-tracking, productivity, and entertainment.

Apple (NASDAQ:AAPL), which has become a market leader with its watch, accounts for a large part of that market -- more than a quarter of all wearable devices shipped in 2018, according to IDC data. Wearables have been a growing business for the company, though it's hard to know by exactly how much since the company reports its wearable devices sales as part of a category that also includes home products and non-wearable accessories.

Going forward, however, Apple can expect those sales to continue to grow. A new report being sold by GlobalData suggests that wearables industry sales will more than double by 2023. A summary of the report shared by the research firm said it expects yearly revenue from global wearable technology to grow from nearly $23 billion in 2018 to $54 billion by 2023. 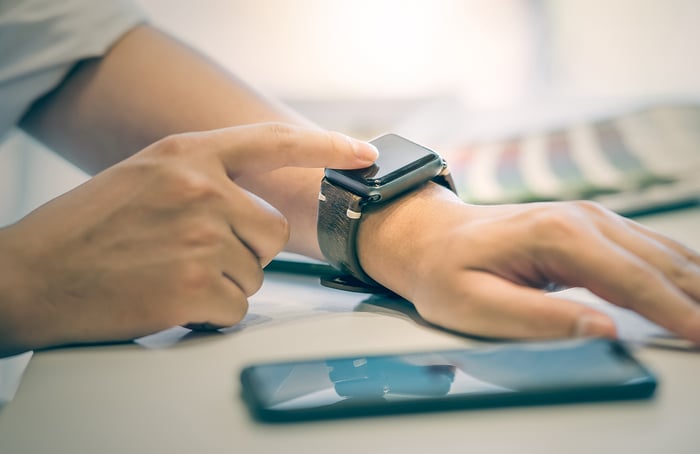 It's more than watches

Smartwatches and fitness trackers have dominated the consumer market for wearables, but that may change, according to GlobalData. The research firm expects watch sales to increase due to increased functionality, like no longer needing to be tethered to a phone, while limited functionality will cause dedicated fitness tracker sales to fall. The company also expects the market to expand well beyond wrist-worn devices.

"The wearable tech theme incorporates more than just wrist-worn devices. Smart earwear, or hearables, has become a more prominent category with the emergence of devices that incorporate voice-activated virtual assistants such as Apple's Siri and Google's Assistant," said GlobalData Principal Analyst for Technology Thematic Research Ed Thomas in a press release. "Hearables also have the potential to match, or even exceed, the performance of smartwatches when it comes to providing health monitoring services."

Thomas believes that wearable devices will continue to become smarter in the coming years. He expects them to add artificial intelligence and augmented reality.

That should expand appeal to consumers and lead to broader enterprise uses. Over the next few years, wearables will become more useful in areas beyond health and fitness tracking (though those capabilities will also greatly expand), making them something that more people integrate into their everyday lives.

What's next for wearables?

Apple has made extensive health and fitness tracking a core part of its Watch, and that's something the company could expand into even further. For example, it could offer monitoring services for senior citizens -- something that's in increasing demand as the population ages.

Wearable devices could also see expanded use in business settings to track worker productivity and/or to monitor their well-being. Today's watches and fitness trackers have only scratched the surface of the market. Higher-end devices will continue to add more functionality, while specialized ones will get better at performing their more limited jobs.

The growth of the wearable market will come from an increasing demand for existing devices and new form factors offering as-yet-unknown functionality. You may have a wearable at work that enhances your vision while offering a data overlay, and use another one to enhance your entertainment experience at a theme park. Both are plausible -- maybe even likely -- and that should help fuel the predicted growth.